TO SANCTIFY, TEACH AND RULE--THAT'S THE HIERARCHICAL AND MAGISTERIAL NATURE OF THE CHURCH AND GOD GIVEN TO THE POPE AND THE BISHOPS IN UNION WITH HIM--THE CHURCH WON'T BECOME A DEMOCRACY, EVER 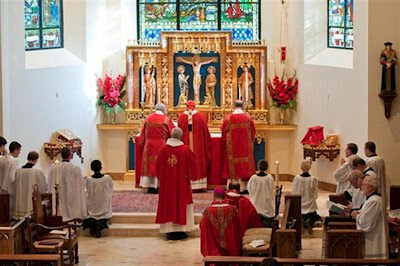 There are those in the Church who think collegiality means democracy and popular rule by vote, similar to what Protestant denominations have, the liberal ones anyway. And of course liberal Protestantism has been dying now for about 100 years. It leaped frogged in its dying when the Anglican Communion negated natural law in the 1930's and now the Anglican Communion through democratic processes has become heretical in many areas, including natural law, where at one time they were united with Catholicism and Eastern Orthodoxy. This is an extremely sad development for Christian unity.

The following article from Religious News Service tells of yet another Anglican/Episcopal clergyman who sees the deleterious effect of democracy in the Church, which are code words for women priests, gay marriage and the blessing of fornication and adultery and in terms of dogmas, the lowering of the bar of the truths of Jesus Christ and that through Him and Him alone is their salvation. The democratic Protestant denominations have become slaves to the secular culture and its minions and gladly so. They have elevated psychology and pastoral theology to a dogma.

The Catholic Church might have some similarities to a monarchy, in that Jesus Christ is King, we look forward to His kingdom on earth and His will on earth and yes, some of the liturgical symbols of the Church and authority symbols in the Church hearken to the Monarchy of Christ and the Kingdom of heaven. That should not and will not change and thank God for that!

Thank God for former Anglicans like Larry Gipson, read on:

BIRMINGHAM, Ala. — The former rector of the nation’s largest Episcopal church has become a Roman Catholic.

The Rev. Larry Gipson was dean of the Cathedral Church of the Advent in Birmingham from 1982-94 and rector at St. Martin’s Episcopal Church in Houston, where his parishioners included former President George H.W. Bush and his wife, Barbara, from 1994-2008.

Last month, Gipson was accepted as a Catholic into the Personal Ordinariate of the Chair of St. Peter, a structure set up by Pope Benedict XVI to accept former Anglicans into the Catholic Church.

“The nature of authority in the Catholic Church is what attracted me to it,” Gipson said. “After I retired, I was concerned and had been for many years about the Episcopal Church’s authority structure.”

Gipson will be among 69 candidates for Catholic priesthood attending a formation retreat this weekend in Houston at the ordinariate’s headquarters.

Among those leading seminars at the Formation Retreat in Houston will be the Rev. Jon Chalmers, who was ordained a Catholic priest in June, the second former Episcopal cleric to be accepted as a priest under the ordinariate.

His wife, Margaret Chalmers, former canon lawyer for the Catholic Diocese of Birmingham and now chancellor of the ordinariate, will also be a presenter at the weekend retreat that runs Friday night through Sunday, Dec. 2.

“It’s a really big deal,” she said. “Larry Gipson, who was the priest of the largest Episcopal church in America, is now a Catholic.”

Although married Episcopal priests have been accepted as Catholic priests since 1983 under Pope John Paul II, only just over 100 came in during that process, Margaret Chalmers said.

The Rev. Matthew Venuti of Mobile was the first ex-Episcopal priest ordained a Catholic priest in the ordinariate, which covers the United States and Canada.

Venuti and Chalmers both have young children, as do many of the new Catholic priests, Margaret Chalmers said.

The ordinariate allows the new Catholics to keep their Anglican form of worship, including the Book of Common Prayer.

Gipson and his wife of 48 years, Mary Frances, attend the headquarters church of the ordinariate, Our Lady of Walsingham in Houston.

“All their services are Prayer Book services,” Gipson said. “The music is from the 1940 (Episcopal) hymnal. It is the Anglican Rite prayer book. It’s the opportunity to come into the Catholic Church while maintaining Anglican tradition.”

Although many Episcopalians have left the denomination over issues such as consecrating openly gay bishops and blessing same-sex unions, Gipson said he didn’t leave in anger.

“I don’t have the right to ask the Anglican Church to change its traditions for me,” he said. “I’m the one who has got to make the changes. Anglicanism has always been hesitant to define doctrine because it has opposing factions. It has left doctrine blurry. People can believe almost mutually opposing beliefs.”

Gipson, who turned 70 on Oct. 23, started attending an Episcopal church with his future wife when he was 14 in Memphis. “I’m thankful to the Episcopal Church,” he said. “I spent my life there. All my friends and people I love are in it. I do not in any way wish to denigrate it. I’m not angry. I was seeking something that I’ve been longing for, for a long time.”

Now, he’s looking forward to the possibility of being ordained as a Catholic priest. Earlier this year he earned a master’s degree in Catholic theology from St. Thomas University, although he already had a master of divinity degree from Yale University.

“I was an Episcopal priest for 42 years,” he said. “I can’t imagine not being a priest. I’m anxious to get back to priestly work.”

Copyright: For copyright information, please check with the distributor of this item, Religion News Service LLC.

If only the typical parish Mass looked more like the one depicted in this post (ad orientem, that is). That altar piece is also very nice.

Where was this picture taken? I can't see why an archbishop would be celebrating in the Anglican Use. Ironically, there is a statue of St Thomas More, and my guess is that this is a Solemn Mass on his feast day. Why is that vested priest standing in the middle of the sanctuary?

The photo was taken at Our Lady of Walsingham, principal church of the Ordinariate of the Chair of St. Peter.

You state, "This is an extremely sad development for Christian unity."

What exactly do you mean by Christian Unity? I'm curious, because you're talking about collegiality as being something other than a democratic action (which I agree with), but you immediately turn around and speak about sad developments in Christian unity. Is this predicated upon a democratic notion of Protestantism and Catholicism; wherein there is not a movement toward reconciliation of the Protestant communions to Rome, but rather an acceptance of Protestantism as somehow equal?

My point is that within Protestantism, there are those who embrace a goodly amount of Catholicism in the areas of faith and morals. Case in point would be the High, Orthodox Anglicans, who have found their way back to full communion with the One, Holy, Catholic and Apostolic Church and in a new way, through the Anglican Ordinariate. But those Anglicans who desire this already had at least partially a great deal of Catholic identity. I don't think the new generation of Anglicans will have that any longer, so Christian Unity is set back.

"Christian unity" is a dangerous phrase, most often appropriated by Modernist unbelievers who view both the Prot and Catholic Church as huge social work organizations. Christian unity almost always means de-construction of the Catholic faith. When someone besides you, Fr., uses this term, my crap detector pegs out.

Found there and in AMNY other locations throughout his writings....

"Thus it is absolutely clear that ecumenism, the movement promoting Christian unity, is not just some sort of "appendix" which is added to the Church's traditional activity. Rather, ecumenism is an organic part of her life and work, and consequently must pervade all that she is and does."

And.....I wondered how long it would take to trot out Ut Unum Sint.

Personally, I think that as an encyclical, it is a disaster. It is a poor attempt at what has become known as "ecumenism." When in reality it is nothing more than a treatise on denominational indifference.

I am not a huge fan of Pope John Paul II's theology and I certainly am no fan of his philosophy. Phenomenology is not really compatible with Catholic thought, and we can see this in many of the forced encyclicals of JPII. Where JPII moves away from Phenomenology, we see a much more orthodox expression, but it is still lacking and sadly, UUS is a prime example. Another....Theology of the Body.

So now we’re beating up on the Blessed John Paul II? Giving Benedict a rest? I’m sorry, I don’t mean to be so critical of fellow bloggers, and I don’t want anyone to take this comment personally, but sometimes I get the sense that some feel they could do a better job of being Pope than the Holy Fathers themselves.

Ignotus, my oint was that "Christian unity" has been coopted by the Left and Modernist unbelievers. The Pope's understanding is, I think, a bit different.

Anon2, Theological critique of an encyclical is not "beating up" on the Pope. You lawyer/professor types have no trouble in beating up on the Founders and the Constitution...perhaps ya'll could have done a better job of writing the Constitution that Jefferson et al. Or, let your boy Obammy write it.

“You lawyer/professor types have no trouble in beating up on the Founders and the Constitution...” -- ???

Much as I admire the Constitution and the Founders (I really do and have said so on many occasions), I do not regard them in the same way as the Holy Father, and I very much hope you do not either. Then again, perhaps such sentiments might help explain some of the problems we are facing today – regarding the Constitution, remarkable document though it is, as tantamount to Holy Script and the Founders as inspired by the Holy Spirit. That would, I suggest, be dangerously close to idolatry.

Also, Gene, if those who pay such lip service to the Founders and the Constitution really want to honor them, they could begin – and clearly I do not include such knowledgeable people such as yourself among this group – by learning something about them and trying to acquire one tenth of the knowledge and wisdom they had.