The New Liturgical Movement has a photo of a recently installed mean, bad, new altar railing in St. Gabriel's in Stamford, Connecticut: 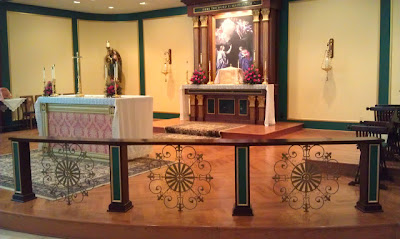 The theology I was taught as to why these mean, bad, old and new altar railings should be removed is that it separated the laity from the sanctuary making them spectators rather than participants and made it appear that what was most important was what was happening at the altar rather than what was happening in the congregation and the priestly people's actions at the liturgy should be as important and unseperated from the ordained "presider's" actions at the altar. So out they went to make the priestly people of God feel a part of the Mass and here they come again and the priestly people of God still feel a part of the Mass.

Do you ever feel like you are living in a revolving door in the Church these days, like everything old is new again and you wonder why the old was gotten rid of and that the reasons given then seem so dumb now?

I must admit that the reasons given then have always seemed (to me) just as dumb as they still do now.

Well, perhaps more transparent than dumb, since it was clear from the beginning that what was done was craftily planned to accomplish within the Catholic Church what Cranmer and Luther did without it.

As a convert, I was perhaps abler (than many or most cradle Catholics) to recognize Protestantization of faith and liturgy when I saw it happening.

"Do you ever feel like you are living in a revolving door in the Church these days, like everything old is new again and you wonder why the old was gotten rid of and that the reasons given then seem so dumb now?"

I think that everything old is eternal and that was purposely dismantled.

I also don't think that it was dumb that it was gotten rid of, but rather that it was a calculated and precise move by the liberals, the Protestants and the Ecumenists to undermine the Church.

If we look at the vitriol the Protestants had/have toward Catholicism, we can see it clear as day that the same vitriol is applied by the liberals to those things traditionally Catholic. A few examples:

1. The vernacular -- Luther wanted it for the EXACT same reason the L/P/E's want it now.

2. The re-ordering of the sanctuary -- Protestants wanted it for the EXACT same reason the L/P/E's want it now.

3. The reformed liturgy -- Luther wanted it for the EXACT same reason the L/P/E's want it now (and it is very close to the so-called German Mass).

4. Married/Female clergy -- Protestants wanted it for the EXACT same reason the L/P/E's want it now.

5. The downplaying of the clergy -- Luther wanted it for the EXACT same reason the L/P/E's want it now.

6. The reduction of importance of the Sacraments -- The Protestants wanted it for the EXACT same reason the L/P/E's want it now.

This whole debacle isn't dumb, it's actually brilliant. The Catholic-at-large was duped by the L/P/E's into believing that the "new normal" is always better.

Hogwash, I say. I call shenanigans.

Hey, what do I know? I think the altar rail properly separates the laity from the sanctuary, the place where the ordained do their part. Despite the implications of referring to the celebrant as presider, we are not all interchangeable, and without the priest, there is no Mass, no Eucharist, no salvation.

And all the Spirit of Vatican II maneuverings cannot alter that.

Give me a railing, please!

When I was in the seminary they always made us cite our sources when writing papers. But, one must ask, what were the sources used by the iconoclasts of the Sixties and Seventies? It is now abundantly clear to anyone reading Sacrosanctum Concilium principals and Roman missal rubrics that there was never any directive from Rome, which controls the Roman Mass, after all, to rid churches of altar rails. Prove me wrong, and Cardinal Arinze will give you a turkey!

That would be the uber-famous

"Environment and Art in Catholic Worship" promulgated by the US Bishops in 1978. The revision of said document in 2000, "Built on Living Stones" isn't much better.

AND...while it doesn't have force of law, it is treated as such. Interestingly, they don't hold anything else a binding lawfully, but that little ditty...look out below!

I questioned it in 1994, while a seminarian and I was just about shot by Sr. Chrissy and Sr. Paul-Therese...It was traumatic.

Of course you're right, Fr. Shelton. There was no directive to remove the altar rails, soooooo.....why not put them back? You're a pastor (I assume) why not just ask a faithful donor to support your vision of putting them back? It certainly wasn't hard to ask donors in the 70's for Cranmer tables....why would it be hard to ask donors for altar rails?

Andy, I suspect if you were to visit Fr. Shelton's parish and see what he has done with what he has to work with, you would be in awe.

Many priests who have much larger, better funded parishes, with many more supportive parishioners have failed to take advantage of their good fortune. Fr. Shelton, on the other hand, has a very small parish in a very small mountain town in East Tennessee with only a handful of parishioners interested in the TLM. Yet, he has multiple TLMs per week, including a Sunday Sung Mass (with, I would guess, an average of 10 attendees). It is a labor of love to be certain!

The parish is configurable to the TLM by moving the altar and what appear to be specially constructed kneelers are implemented to serve as an altar rail. He has a video on his blog of this in progress if I'm not mistaken.

I believe he also has at least one parishioner who is a seminarian with the ICRSS and others who are or have had TLMs for the celebration of Holy Matrimony.

He should teach a class on how to run a parish. And more priests would do well to listen to his advice.

That "modern" Altar Rail pictured is somewhat "blah" but better than what that Sanctuary would look like without it. There's not a lot that you can do when you've already built a wooden stage where a Sanctuary should be. But still, any rail is better than no rail.

I had to laugh when someone mentioned the "Living Stones" document. At a certain Parish in this Diocese that document was used to hammer down any remotely traditional or conservative Parishioner who tried to plead for some sanity in the building plans for the new Church. But hey, the Priest there also tells Parishioners "don't worry, you don't need an annulment, we don't do that anymore". Crummy design work is the least of that Parish's problems. But hey, they bring in the cash so I guess there's no need to call the pastor to account.

Be a "priestly people" without the priest, who is chosen by the High Priest Himself?

Thanks for the comments, Marc.
Yes, I had a cabinet maker create two extra-long kneelers, with houseling cloths, for use as our altar rail.