MAY GOD GRANT YOU PARDON AND PEACE, AND I ABSOLVE YOU OF YOUR SINS, "IN THE NAME OF THE FATHER AND OF THE SON AND OF THE HOLY SPIRIT"

BREAKING NEWS, (AND I HAVE ONCE AGAIN BEAT THE OTHER SLEEPING CATHOLIC BLOGGERS IN REPORTING THIS!)JUST THIS MORNING, DECEMBER 22, 2012, HOLY FATHER MEETS WITH AND PARDONS PAOLO GABRIELE 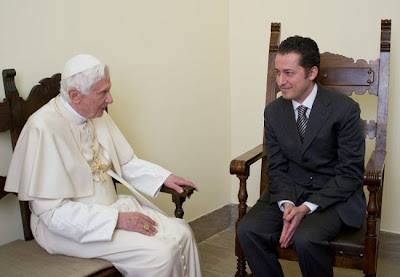 We have seen the number of people going to confession in our parish multiply dramatically over the past 8 years. For a year now, we had daily Confessions from 7:30 AM until 7:55 AM. We get anywhere from 2 to 15 people each day.

This week, the 7:30 AM Confessions have been overwhelming and we've had to complete them after the 8:00 AM Mass.

On Friday morning, I had to do the same thing before and after Mass and must have heard about 40 confessions and that is on top of our Advent Penance Service Thursday night where more than 200 were present (with six priests). I made sure I went to confession on the eve of by 59th birthday and the presumed end of the world!

But this morning, His Holiness, Pope Benedict XVI extended forgiveness and pardon in a rather dramatic way which gives the true meaning of the pardon God gives us from our sins and crimes:

Vatican City, 22 December 2012 (VIS) - Given below is the communiqué released this morning by the Secretariat of State:

"This morning the Holy Father, Pope Benedict XVI visited Paolo Gabriele in prison in order to confirm his forgiveness and communicate in person his decision to grant Mr Gabriele's request for pardon, thereby remitting the sentence passed against the latter. This constitutes a paternal gesture towards a person with whom the Pope shared a relationship of daily familiarity for many years.

"Mr Gabriele was subsequently released from prison and has returned home. Since he cannot resume his previous occupation or continue to live in Vatican City, the Holy See, trusting in his sincere repentance, wishes to offer him the possibility of returning to a serene family life".