THREE RATS, I MEAN, RANTS AND ONE KUDOS

My kudos is at the end of my first three rants, but this is a teaser. Compare this high school chapel (Cathedral High School on the left coast in San Diego, CA) which actually has a quite beautiful shell of a building with post-Vatican II blah liturgical sensibilities, completely utilitarian, mechanical and devoid of any real external call to piety and mystery. It looks as though it was designed by John Calvin to be a Presbyterian Church! In addition to its utilitarian and minimalistic design, where is the tabernacle? Compare this photo to the new Blessed John Paul II High School chapel in Huntsville, Alabama at the end of my three rants. The south rises again, but this time the Catholic south! 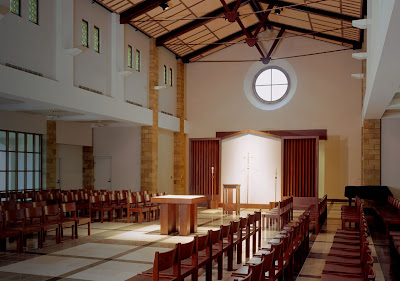 I'm really bummed out! My birthday is December 21st and I don't know if I should plan for it or not! The Vatican astronomer seems to think that the world won't end on that date. I'm inclined to believe him. However, the only reason I do believe him is that I'm suppose to turn 59 years old on the 21st. However, if I had been turning 60 years old on that date this year, truly the world would be ending.

You remember the "rats in the rectory" saga of just a couple of years ago. Well, we had a mouse in the house recently and our custodian set a couple of conventional mouse traps in the kitchen to get him. Well, it didn't do quite the job that the trap was suppose to do. The mouse was not killed but critically injured, unbeknownst to me. The poor little thing dragged himself under the refrigerator only to die an agonizing death. Then he began to rot! Keep in mind this rot was in our kitchen where our food is cooked and most of the time I eat my meals. Not very appetizing.

For my final rant, as I ate my supper in the kitchen on Tuesday night (my parochial vicar tells me he had to go to Buffalo, NY to visit an aunt until Saturday, but if he has a tan when he returns I'll be rather suspicious)from behind me I heard something rather large moving and gnawing. Of course, I still suffer from current and post traumatic stress syndrome as it concerns the rats in the rectory sagas, so I jumped out of my seat to try to listen more carefully. The movement and gnawing continued. It sounded like to me that it was in the wall behind the dishwasher. But it was hard to tell and it sounded bigger than a tiny mouse! I almost lost my appetite and had to move my plate from me with my back to the wall sitting at the table to the other side of the table so I could see the wall!

Keep in mind about three years ago we had a super-rat in the house who liked eating plastic. He was able to get behind the dishwasher and ate all the plastic piping behind it rendering the dishwasher unusable and I on the verge of institutionalization. This particular rat, (not to be confused with the one that was stalking me in the kitchen sometime later as well as in my office, not to mention my bedroom where in fact I think he stared at me as I slept!), knew his way through the walls of the house from the ground level of the house to the attic which would be four floors! In the attic there was a nest of them, called tree rats, and very large I might add, the size of sewer rats!, who gnawed their way into the attic. This particular rat liked plastic very much because in addition to eating the plastic piping of the dishwasher, he had dragged upstairs to the attic either from outside or from our kitchen (I suspect he found it outside) a plastic lid covering, very large, on the top of a deli tray you might buy at the deli for a party!

Now for the kudos. Have you seen some Catholic High School chapels like the first I post above. Usually these are very modern and do not have a sense of the sacred at all. Usually these chapels are very ugly. The New Liturgical Movement Blog is reporting on the new chapel at Huntsville, Alabama's Blessed John Paul II High School and the blog says:

Design and Furnishing of New High School Chapel, including all artwork, lighting, flooring, liturgical appointments, furniture, etc. The Franz Mayer Crucifix is from the former Visitation Academy in Wheeling, West Virginia and dates from the early 1860s. It was installed in the chapel at the height of the Civil War and hung there until 2011 when it was restored and transferred to the chapel here. The statues are also Franz Mayer and date from the same period. The custom altar, ambo, etc. are all of solid cherry. The altar features a Gothic-revival brass image of the Agnus Dei that was once part of an 1860s English reredos. The porcelain tile floors feature a parquet design in the nave and gray and white harlequin pattern in the sanctuary.

Now if this isn't the influence of the "reform of the reform of the ordinary form but within continuity" than I don't know what is! Kudos to Blessed John Paul II! I think this chapel is very inviting to high schoolers not only for Mass but private prayer, meditation, contemplation and public and private devotions. I don't think the extreme minimalistic and utilitarian example at the top invites any of that, so I suspect the chapel above is not used at all except for Mass. I think the Calvinists and the Presbyterians and some Baptists would like the first picture above and in fact I suspect they designed that chapel! 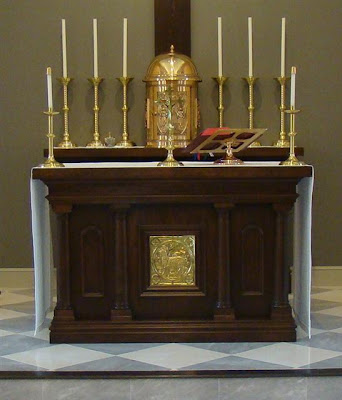 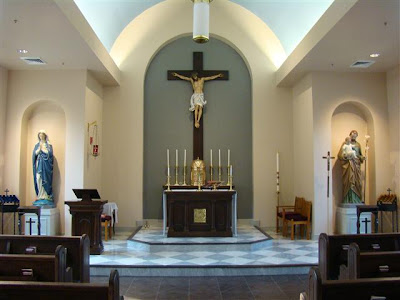 Maybe if you can get the Bishop to Confirm the rat you will never see him again.

Unfortunately, the barren, Protestant look of the chapel reflects the architectural tendencies that have dominated my poor hometown diocese for the last 20 years or so. If you go into any church built in the last 20 years there, you will not find the Blessed Sacrament visible without searching for it. Instead, there are mandated "Blessed Sacrament Adoration Chapels", some of which are hard to find. In one church in Escondido (a community about 25 miles north of the city) the "chapel" is more like a closet. One Church in National City (a largely Hispanic community) burned down and when they rebuilt they wanted to keep the tabernacle visible and were told that they HAD to do this "adoration chapel" thing so that the "static" Presence of the Eucharist would not compete with the "active" Presence at Mass. In another parish, they raised money to expand and renovate their church advertising that they were going to restore the tabernacle to the center, only to be told by the liturgical stormtroopers at the diocese that they were in violation of policy--after the diocese had agreed to let them do it. You can read about that here: http://www.adoremus.org/0702News.html

Hopefully, this silliness is about to end once and for all. But it seems as though the closer we get to the REAL renewal and reform the Holy Father wants for us, the more determined these artery-hardened liberals are to institutionalize their barren vision of the Church.

The architecture of the Cathedral School is of the style of Frank Kazmarcek, OSB. It is boring and it is utilitarian and it is so 1990s.

Bless a Jack Russell Terrier and turn him loose in the rectory.