A MARKED GRAVE, A PLACE ANTICIPATING THE SECOND COMING OF CHRIST AND THE RESURRECTION OF THE BODY

I've been waiting patiently for my mom's foot marker to be placed at her grave. It came yesterday and my sister sent me this by way of her phone. For almost three months my mom's grave has been an "unmarked grave" and created a sense of distress for both my sister and me. That's over now! 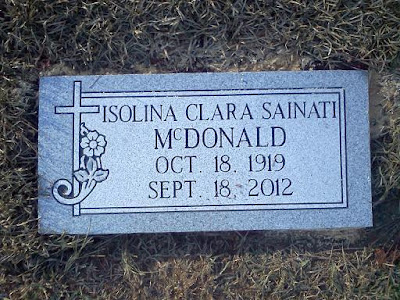 Just this week I've ministered to three people who have died and their families. The funeral I have today is for one of our 99 year old parishioners, a faithful, devout Catholic all her life. She'll be buried after her Requiem Mass at the nearby Riverside Cemetery.

Sadly, though, the two others that died were non-practicing Catholics. I was able to anoint one and give the apostolic absolution to her prior to her death to which her husband said to me "I guess that's her ticket to heaven." She died shortly thereafter. Sad and fortunate for her to have received the final rites of the Church!

The other one who died, non-practicing, was dead by the time I got to the emergency room. His son had the good sense to know that at least a priest should be called. I said the prayers for the dead over him with his son and daughter-in-law there. I then asked the son what plans he wanted to make for the funeral. He told me his dad didn't want a funeral, simply to be buried at sea. I presume this means cremation and the tossing the ashes in the ocean at some future date. No Catholic anything for this poor soul except the prayers after death which certainly count for something.

The two non-practicing Catholics are baby boomers, the confused Catholic generation. I think we are going to see a lot more of this sort of thing in the future. Sad!
Posted by Fr. Allan J. McDonald at Friday, December 14, 2012

I think that the natural response of the VII generation to this (especially as it becomes more common) is that God will certainly save them anyway, and that it thus follows that the sacraments are superfluous. The next step will be that sacramental theology is too legalistic and perverts the Gospel.

Can you say "Protestantism?"

One of my co-workers refused to call a priest when his father was dying. The father had been Catholic all of his life. I don't believe he had been to church in years, but he did leave something to the diocese in his will, which I took as an indication that he had not abandoned the faith completely, unlike his son.

It's always bothered me that this man died without the sacraments.

"his Father didn't want a Funeral". Wow, you can't get more explicit than that can you? The child may not have relaized it, but his father had completely turned his back on his Faith. "Don't Pray For Me" is what he really said.

I have heard it speculated from the pulpit by two priests that everything will eventually be forgiven and that you can do nothing wrong. We need to evangelise my entire diocese as if were complete pagans. We have lost our minds.