YIKES, BISHOP STRIPS CATHOLIC HOSPITAL OF ITS CATHOLIC STATUS OR DID THE HOSPITAL STRIP ITSELF OF THAT STATUS? 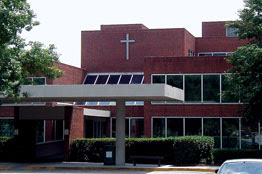 St. Joseph Hospital in Augusta, Georgia was sold by the Catholic hospital corporation that owned it to a "for profit" secular corporation. This new corporation wanted to keep the St. Joseph nameplate, but the Sisters of St. Joseph of Corondolet would not allow it. The name was changed to Trinity Hospital. However, the hospital still has a full time Catholic priest-chaplain, daily Mass in the chapel with reservation of the Holy Eucharistic, statues throughout the hospital as well as crucifixes in the patients' rooms. The agreement in the sale of the hospital to this for profit corporation was that they would not provide abortions.

I wonder what it will mean for the hospital in Arizona in terms of Catholic ministry there now that it has lost its Catholic status.

Bishop Thomas Olmsted has declared that St. Joseph’s Hospital in Phoenix, Arizona “is not committed to following the teaching of the Catholic Church and therefore this hospital cannot be considered Catholic.” 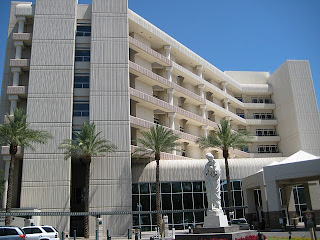 In a statement he released on December 21—the date that he had set as the deadline for assurances from St. Joseph’s Hospital and its parent corporation, Catholic Healthcare West (CHW)—Bishop Olmsted said that he planned further steps “to avoid the impression that the hospital is authentically Catholic, such as the prohibition of celebrating Mass at the hospital and the prohibition of reserving the Blessed Sacrament in the Chapel.”

Bishop Olmsted’s detailed and pointed criticism of CHW policies will raise questions for other Catholic bishops in dioceses where CHW institutions are located, in California and Nevada. The bishops’ complaints indicated that CHW institutions had been engaged in contraception, sterilization, and occasional abortions. The American Life League has released a separate report confirming the same charges against Catholic Healthcare West. [See today's separate CWN headline story.]

In a thorough public statement explaining his decision, Bishop Olmsted reveals that he has had concerns about the moral standards for care at CHW institutions for some time, and has been in discussions with CHW officials for seven years—since his arrival in the Phoenix diocese. He reported that he has made repeated demands that CHW comply with Catholic moral teaching regarding health-care policy, but “sadly, over the course of these years, CWH has chosen not to comply.”

The situation came to a head, Bishop Olmsted explains, when he learned that an abortion had been performed at St. Joseph’s Hospital last year. “When I met with officials of the hospital to learn more of the details of what had occurred, it became clear that, in the decision to abort, the equal dignity of mother and her baby were not both upheld; but that the baby was directly killed…In this case, the baby was healthy and there were no problems with the pregnancy; rather, the mother had a disease that needed to be treated. But instead of treating the disease, St. Joseph’s medical staff and ethics committee decided that the healthy, 11-week-old baby should be directly killed.”

In accordance with canon law, Bishop Olmsted said, he told Sister Margaret McBride, the administrator responsible for the decision to perform the abortion, that she had incurred the penalty of excommunication. “I did this in a confidential manner, hoping to spare her public embarrassment,” he added. Knowledge of the excommunication became public as the hospital defended its decision to perform the abortion.

Since that time, Bishop Olmsted reports, “subsequent communications with leadership at St. Joseph’s Hospital and CHW have only eroded my confidence about their commitment to the Church’s Ethical and Religious Directives for Healthcare.” Thus he felt compelled to take action.

Bishop Olmsted makes the point that the medical institutions performed many services that the Church condemns under the terms of government contracts. “CHW and St. Joseph’s Hospital have made more than a hundred million dollars every year from this partnership with the government,” he reports.
Posted by Fr. Allan J. McDonald at Tuesday, December 21, 2010

Ah,a Bishop with cohones. Marvelous! Perhaps we can find a Catholic hospital that will do testicular implants so that more Bishops will follow suit.

Could we possibly have Olmstead elected Pope tomorrow? It would a pleasant change to have a Holy Father with some guts.

I believe Pope Benedict has plenty of guts. There is much he is not aware of, and the hiearchy, or chain of command, is not always clear.

Based on what BXVI does when he finally find something out, it looks like a good idea for some folks to get their house in order before he does.

The subject of the post is an example of folks who don't want to follow Catholic teachings yet still want to be called Catholic. That is just strange to me.

I think there is a faction of these people who remain in the Church as deliberate subversives with an agenda. I have heard others say they remain for the "aesthetics." Sheesh! Hmmm...wonder how they will like the appointments of "adamantine chains and penal fire?"