Most Reverend Blase Cupich, Bishop of Spokane, presents on the new translation of the Roman Missal. 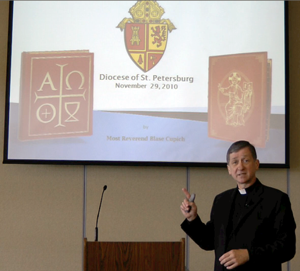 In the late 1980's when I was vocation director for the Diocese of Savannah, we had college seminarians at the Pontifical College Josephinum in Columbus, Ohio. Bishop Cupich was the rector of this seminary at the time which also included the major seminary. Bishop Cupich offered me a position at the college level program as "dean of students" which might be better classified as "prefect of discipline." Of course I was quite flattered and told him he would need to write a letter to Bishop Lessard requesting that I be released from the Diocese to take on this position. I certainly wanted a letter like that in my file to counterbalance all the negative ones! But I really wasn't enthused about the position and leaving the diocese, so when Bishop Lessard asked if I wanted to go, I said I had prayed about it and would prefer to carry on as is. But I often wonder where my life as a priest would be now if I had taken the assignment. When the road forks, and one takes one direction over another, will there be parallel time in heaven for us to see what might have been?

At any rate, I 'm sure you will set aside about three hours to view these videos on the revised English Mass!

From Sacramentary to Roman Missal, Part 1 from Diocese of St. Petersburg on Vimeo.

From Sacramentary to Roman Missal, Part 2 from Diocese of St. Petersburg on Vimeo.

From Sacramentary to Roman Missal, Part 3 from Diocese of St. Petersburg on Vimeo.

Fr. McDonald, since these videos are labeled "From the Diocese of St. Petersburg"--a diocese which one serious about the reform of the reform might not ordinarily think of as a prime source of reliable information--perhaps you might say something about Bishop Cupich's approach, in order to encourage an investment of those three hours. (Of course, the fact that he wanted you augurs well.)

I haven't dedicated three hours to these yet, but he is a very good teacher,a sound theologian and from what I have seen, it's good! Although because he did want me for that position, one could say he must be questionable!

From the first 20 minutes or so, it looks pretty good!

Well, it's not that much warmer down here in Macon and yes the weather there did concern me as I visited the seminary in the winter!

The real question is "What would have happened to the Diocese of Savannah if you had left?".
I perish the thought.

About the fork in the road: you can read Dickens or watch 'It's a Wonderful Life'.

I have found that in every case where there a life event I don't care for there is something I would not give up that came with it.

Fr. McDonald, I have watched 2 of the 3 videos. Bishop Cupich is obviously very knowledgeable (at least about what went on with the new translation) and well spoken. I was disappointed in his spirit of Vatican II take on the liturgy. He at one point encourages commentary from the priests in his diocese during liturgy for instructional purposes which I could understand but he is certainly not a "Say the black, do the red" disciple. His advice to bloggers and their criticisms of church affairs: "Get a life". I was encouraged by some of the questions from his audience of priests. Several times they questioned what he said and you could sense a traditionalist spirit among them. You get the feeling that there is probably not a resurgence of the Traditional Latin Mass in his diocese. Thanks for the link to these videos. There is quite a bit of information on the new translation and the formation process.

mmmmmmmmmmm
great job
hope that u will keep it
thanks