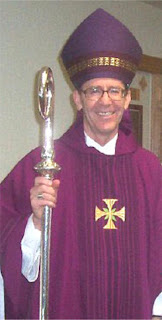 When the Catholic hospital in Augusta was sold to a for profit corporation, many Catholics in Augusta were dismayed that the Sisters of St. Joseph who founded the hospital in the 1950's could no longer keep this ministry going as a very powerful Catholic ministry in Augusta. It did more for ecumenism than any other ecumenical endeavor and this ecumenism began in the 1950's. At its peak, there were almost 30 sisters who lived in the hospital convent and worked in the hospital. That dwindled to one sister, who is still working for the for profit hospital.

One can imagine how the Catholics of Phoenix must feel about a viable Catholic hospital losing its Catholic status. I hope the anger is not misdirected toward the bishop, but I suspect it is. The anger should be directed toward those who are trying to dismantle traditional Catholic moral teaching and practice in the medical ethics arena.

God Bless His Excellency, Bishop Olmstead. Pray for him.