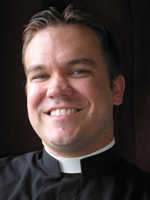 As I watched a rerun of the Papal, almost at Midnight Christmas Mass, I was delighted to see one of our seminarians from the Diocese of Savannah, Jason Adams was the second lector. He spoke in impeccable southern! It was so nice to hear our native tongue from St. Peter's. The announcer even mentioned him by name and diocese and his seminary, the North American College in Rome as he stepped to the ambo to do the reading. Then once he concluded, the announcer went so far as to say that Adam is from Cordele, Georgia, just an hour's drive south on I-75 from good old Macon. Cordele is a hole on the interstate, not to be mean, and like Bethlehem, no one really important comes from there.

This is the second Diocese of Savannah seminarian to read at a televised papal Mass. My parochial vicar, Fr. Justin Ferguson, who also studied at the North American College in Rome, was a third year seminarian and read the second reading at Pope Benedict's Inaugural Mass in 2005. Fr. Justin though is from Riverdale, Georgia, which is a suburb of Atlanta next door to the world's busiest airport and well, we really don't think Atlanta is southern anymore given the fact that all those carpetbagger Yankees have taken over the whole damn place, damn Yankees! But I digress.

It was nice seeing the younger generation seminarian wearing an amice and alb to do his reading, whereas third year seminarian Justin Ferguson wore a black suit and tie! He's such a radical. Thank God that older generation of seminarian is passing!
(I suspect though it had more to do with the papal Master of Ceremony who under Fr. Justin was Marini I and under Jason, Marini II! READ ALL ABOUT MARINI II WITH COMMENTS BY FR. Z BY PRESSING THIS SENTENCE!
Posted by Fr. Allan J. McDonald at Sunday, December 26, 2010

We should be so proud of our seminarians that have been given such honor!! What a blessing. I hope we can see more of our seminarians attend the NAC. So far only Jason is there now. In the past there were two or three at a time. There is no better experience that to be in the Home in Rome, as Dr. Hahn would say.

LOL one of your funnier posts, but at the same time on a wonderful subject.

By the way, did you notice something else at the Papal "almost" Midnight Mass? No Communion in the hand for anyone, not just those receiving from the Pope. Wouldn't that be a wonderful gift from the Holy Father to go along with the new Missal Translation? Invoke the Indult!!

Fr., May I correct your English..."damnyankee" is one word.