(I don't know what's worse, rats in the rectory or priestesses in the church! READ ABOUT HER ARREST IN THE HUFFINGTON POST!)
Macon native and Catholic "priestess" the Rev. Brenda Lee being arrested by secret service in California as she tries to board Air Force I with a sitting president on it! Along with Santa Claus, she's in town tonight and coming to the Midnight Mass whether we're naughty or nice! 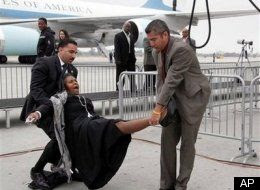 The Rev. Brenda Lee, not to be confused with the singer Brenda Lee, is from Macon, Georgia and grew up in our black parish, St. Peter Claver Church, a stone's throw from Saint Joseph Church. Somehow she believes she is a Catholic priestess. She normally lives in California, which only seems like justice, but makes her way to Macon to spend time here annually. She always attends St. Joseph Church either wearing her cassock or more frequently when attending Mass, her alb and chasuble. Now what really drives me crazy is that the chasuble she wears is always the wrong liturgical color!

She came by the rectory yesterday afternoon in her cassock to inform us she would be attending the Midnight Mass and said she had never processed into Mass at a Midnight Mass. My parochial vicar informed her that she wouldn't do it tonight either. Time will tell though.

Please pray for her and for me to keep my cool.

The picture above is from the Huffington Post. READ ALL ABOUT THE PRIESTESS BRENDA LEE WHO WAS ARRESTED BY THE SECRET SERVICE IN CALIFORNIA AS SHE TRIED TO BOARD AIR FORCE I ON WHICH PRESIDENT OBAMA WAS A PASSENGER!
Posted by Fr. Allan J. McDonald at Friday, December 24, 2010

You should direct her to my parish. They wouldn't even notice her, simply assuming she was one of the 374 EMHC's.

A four alarm head case. I have no patience for this kind of nonsense. She needs to be in a mental institution if the State hadn't closed them all.

I remember this. It would be funny if it was not actually going on in the mass. An acquaintance of mine just retired from Air Force One duty. I'll have to ask him if she was taken off the aircraft because all the seats were already filled with crazy ministers.

Fr. McDonald - Would you put up some photos of St. Joseph's decorated for Christmas?

I will when I get them. I might take a couple with my blackberry, but sometimes these are blurry.

She was at the midnight mass in white alb, white chasable and stole. She was very docile and made no attempt to approach the altar. I think most thought she wearing Nigerian garb or native dress, there was no adornment on the chasable, shinny solid white.

If she sincerely believes she's a priestess, she ought to open her own "church" and go for it!

Unfortunately, she wouldn't attract as much attention as when she brings her fancy dress routine to somebody else's church, so that's unlikely to happen.

I am not sure if this person/story seems more 'at home' where I used to live (San Francisco) where I once had a chat while stopped in traffic on my way to church with 2 black transvestites dressed in pink tutus with blond wigs on roller skates (for real) OR my current church situation where we have just found out that the Priest who used to do Mass in John Lennon tees & flip flops is coming back for round two as our pastor. Either way, truth is quite often stranger (and sadder) than fiction... - pgal

All this crazy talk has seemed almost unreal to me, UNTIL I saw it with my own eyes.
While on vacation in the mountains of NC earlier this week, I was blessed to be able to attend an 8am Mass. While it was wonderful to see a 'real Sister' in full habit, it wasn't wonderful to see what else I saw. Namely an elderly woman assisting the priest as an acolyte. She was not dressed as an altar server, she was dressed as an acolyte and sat right next to the priest as an acolyte does, not off to the side as an altar server does. She performed all the functions that an acolyte as the sole assistant at a morning Mass would do.
There was also a Christmas tree right under the crucifix. It was very distracting; and also detracting from the curcifix. Also, this was the first Mass I've attended where the priest, after finishing the general intentions, invited the congregation to voice out loud any intentions they have. I bit my tongue so hard that I had to go have it sutured up.
It took all my concentration to focus on the Mass and remember that these things don't invalidate the Mass, plus also to constantly remind myself how grateful I was to be at ANY Mass.

Lamb, you are far more charitable than me. I would have left...sooner than later. Voicing intentions...don't holy rollers and some times Baptists do that? There are some great jokes about praying out loud in church, but most are too irreverent to print here.
What if we sent Fr. MacDonald or Fr. Justin to correct this misguided Priest...but, I have a theological question. If a Priest smacks another Priest (for Liturgical license or maybe even just plain stupidity), is there a sacramental effect? What if the smacking Priest dipped his hands in Holy Water first or had them blessed by another Priest before the smacking?

Father McDonald, she must have heard you left, SHE'S BAAAAACCCCK !