THE MOST PROMINENT PLACEMENT OF THE TABERNACLE IN THE SANCTUARY 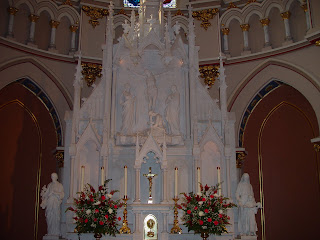 Reverent celebrations of the Mass in either form, this case the Ordinary Form: 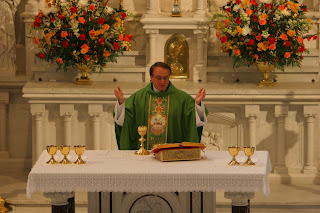 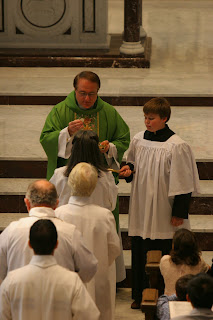 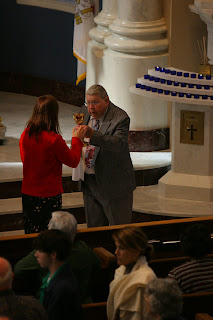 Solemn Exposition and Adoration of the Most Blessed Sacrament 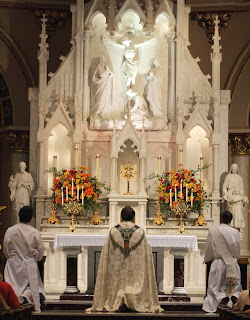 Preaching the homily as integral to the Liturgy of the Word 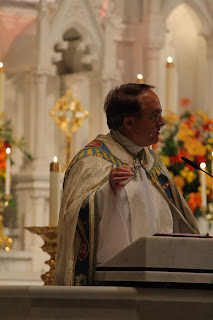 APOSTOLIC LETTER
MANE NOBISCUM DOMINE
OF THE HOLY FATHER
JOHN PAUL II
TO THE BISHOPS, CLERGY
AND FAITHFUL
FOR THE YEAR OF THE EUCHARIST
OCTOBER 2004–OCTOBER 2005

There is a particular need to cultivate a lively awareness of Christ's real presence, both in the celebration of Mass and in the worship of the Eucharist outside Mass. Care should be taken to show that awareness through tone of voice, gestures, posture and bearing. In this regard, liturgical law recalls—and I myself have recently reaffirmed(15)—the importance of moments of silence both in the celebration of Mass and in Eucharistic adoration. The way that the ministers and the faithful treat the Eucharist should be marked by profound respect.(16) The presence of Jesus in the tabernacle must be a kind of magnetic pole attracting an ever greater number of souls enamored of him, ready to wait patiently to hear his voice and, as it were, to sense the beating of his heart. “O taste and see that the Lord is good!” (Ps 34:8).

In Pope John Paul II's above exhortation, he along with Pope Benedict strive to reinforce the traditional piety, reverence and respect we should have for Mass and the moment of Holy Communion as well as adoration of the Most Blessed Sacrament apart from the celebration of the Mass. Here are my suggestions:

1. During Mass, there should be full, conscious and active participation, which also means active contemplation and sacred silence. This type of participation is both interior and exterior. One could mouth all the words of the Pledge of Allegiance and not care one iota for the content of what is pledged. The same is true for Mass, mouthing the responses while important needs also an interior conviction about the words uttered.

2. This active participation during Mass, means also actively listening to the Word of God proclaimed and taking it to heart interiorly which then manifests itself once of is "commissioned" to "Go in Peace to love and serve the Lord."

3. The moment of receiving Holy Communion should be filled with awe and wonder and the intense desire to be free of all sin and in particular mortal sin. When one looks at the Easter Vigil which has recaptured the original order of the Sacraments of Initiation, that of Holy Baptism, Sacred Confirmation and the Most Holy Eucharist, one realizes that the reception of Holy Communion takes place after the washing away of sin in Holy Baptism and the gift of the Holy Spirit received in Baptism and "signed and sealed" in Confirmation. The newly initiated do not dare approach the altar for Holy Communion without their sins washed away and thus fully united to the Church in its three expressions, "militant, suffering and triumphant." Thus how much more should Catholics recover the forgiveness of their Baptism prior the Holy Communion through Sacramental Confession or the Sacrament of Penance?

4. The actual reception of Holy Communion should follow the norms of the USA's adaptation of the General Instruction of the Roman Missal.
a. One should bow before receiving either form of the Sacred Species
b. personal piety should be restrained, but the Sign of the Cross made before or after or both receiving is a long custom in the Church
c. When receiving on the tongue, one should stand very still, open mouth and extend tongue slightly for the convenient placement of the host on the tongue
d. When receiving with the hand, one should be a throne with one hand clearly under the other, stand still, and then place the host in the mouth before departing. One should never place the host in the mouth while walking or ever take the host to the pew or to someone else
e. I personally think we should return to kneeling for Holy Communion or it should be a clear option that is not seen as disobedient to the norms of the General Instruction of the Roman Missal

a. sacred silence in the Church out of respect for the awesomeness of this Presence
b. genuflection to our Lord when passing directly in front of the tabernacle
c. prayer and adoration kneeling before our Lord in the tabernacle
d. periodic Solemn Exposition and Adoration of the Most Blessed Sacrament and Benediction
e. Perpetual Adoration chapels with 24 hour adoration of our Lord in the monstrance

6. Prominent placement of the tabernacle in the Church where all can see it and all can adore before and after Mass. While we understand that one should not be adoring the Most Holy Eucharist which is the Risen Lord under the species of the consecrated Bread during the celebration of the Mass, one should also be aware that Christ cannot be divided. He is Who He is.."I AM"! So there is no conflict in the various aspects of how Christ reveals Himself to us in the actions of the sacramental signs. It is He Who is! I AM!
Posted by Fr. Allan J. McDonald at Saturday, December 18, 2010

Where is the mention in this column on respect for Eucharist about the flippant disregard for the Eucharistic presence by the man who attended his child's recital in youur church but all the while was drinkin Vodka.

Since he posted it on his twitter page and communicated it to others and thus it is public knowledge, all I can say is that I have dealt with it to the best of my ability. When we notice people bringing food and drink into the Church, we ask that they dispose of it in the quickest way possible. I have even encouraged parishioners to be so bold as to request someone who is in flagrant violation to dispose of it, but in the communication should be polite. The man in question obviously has a drinking problem and prayers are needed for him and his family. But that leads us to the casualness of our southern culture today even as it regards Church, especially our Protestant Church culture now mimicking the culture of the Mega Churches, where everything is casual, donuts, coffee and food items are provided in the Church and encouraged to be brought into the service. I had a family come out of a funeral Mass at St. Joseph carrying bottles of Dr. Pepper which they evidently enjoyed during the Requiem. I don't think any insult was intended, but respect for religious customs of various Churches and Synagogues is not on the radar screen of "church goers" today, it' all about their comfort and their narcissism!

You hit the nail on the head in your response to the question about the man drinking liquor in the church, Father. It is no longer possible to assume that people have even a basic knowledge of appropriate behavior, at church or anywhere else. The first time I had a job applicant bring a bottle of soda to an interview I was shocked, now I just keep a trash can handy and ask them to dispose of it.

By the way, excellent column. I wonder if it would be a felony or a misdemeanor to print up 500 copies, break into my parish church, and tuck one in each hymnal? ;-)

Breaking and entering would be a felony of course, but copying my post would not be and sticking them in the hymnal would be only a venial sin I think because you will make your pastor mad and those who have to take them out and dispose of them. When I was stationed at our Cathedral, each Holy Week, a group of fundamentalists would sneak copies of the anti-Catholic Chick publications and insert them into the missalettes. We were not happy. I had a parishioner actually ask me if I placed them there!

Good advice, Father. As I have no desire to celebrate Christmas in the county jail, perhaps I will scuttle my plans jimmy the lock on the church door.

That said, no one ever explicitly told me that I -couldn't- distribute unofficial handouts when leading the RCIA class in a discussion of "feelings, trends, topics, and matters of justice".

Under "Actual Reception of Holy Communion" you wrote: 'personal piety should be restrained...'

I take it this means 'of a restrained nature'.

Will you kindly specify/give examples of 'unrestrained' personal piety while receiving Holy Communion?

Unrestrained reception of Holy Communion might mean a personal piety where one takes the host, elevates it for personal adoration and then consumes the host. Or it might mean coming up with hands uplifted as in a Charismatic prayer meeting. It could mean creating a spectacle in front of others by doing these things and other things which go outside of the norm, like saying Thank you after receiving or praising God in a loud voice or say "amen" so loud the next town over hears it. One might kneel for a lengthy time in personal thanksgiving, thus blocking the next person from receiving.