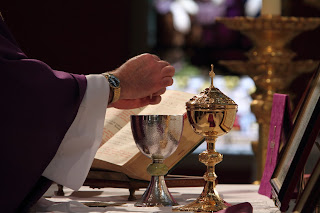 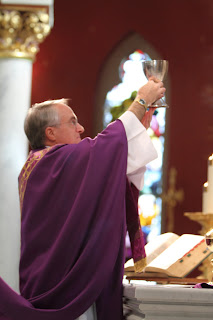 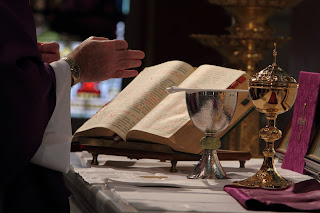 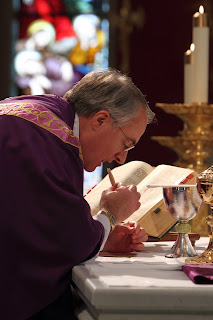 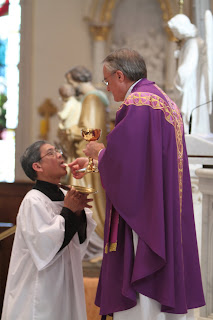 Benedictines traditionally have been on the cutting edge of promoting the Liturgy well celebrated including good liturgical music and chants. Therefore,for a Benedictine to highlight the superiority of the "ad orientem" manner of celebrating the Mass is quite important. In your comments, please also include why you might find the priest facing the people during Mass to be advantageous.

Fr. Mark Kirby on Ad Orientem and the TLM

Fr. Mark Kirby is Prior of the Diocesan Benedictine Monastery of Our Lady of the Cenacle in Tulsa, Oklahoma. Bishop Edward J. Slattery of the Roman Catholic Diocese of Tulsa established the monastery in 2009 with the distinctive mission of Eucharistic Adoration for the sanctification of priests. Fr. Kirby maintains a great blog -- Vultus Christi -- on which he posted the following article on December 16, 2010:

December 17, 2010 will mark the fifth anniversary of my standing before the altar ad orientem for the Holy Sacrifice of the Mass. I began offering Holy Mass exclusively ad orientem at the Monastery of the Glorious Cross, where I served for a number of years as chaplain. I prepared the change in Advent 2005 with an appropriate pastoral and mystagogical catechesis.

After September 14, 2007, Summorum Pontificum made it much easier to celebrate the traditional rite of Holy Mass and, since undertaking my mission in Tulsa, I have offered the Extraordinary Form daily, having no desire and seeing no need, in the context of contemplative monastic life, of celebrating in the Ordinary Form.

That being said, after five years of offering Holy Mass ad orientem, I can say that I never want to have to return to the versus populum position. While traveling, I am, however, sometimes obliged to celebrate versus populum, notably in Ireland, in France and Italy; it leaves me with a feeling of extreme inappropriateness. I suffer from what I can only describe as a lack of sacred pudeur, or modesty in the face of the Holy Mysteries. When obliged to celebrate versus populum, I feel viscerally, as it were, that there is something very wrong -- theologically, spiritually, and anthropologically -- with offering the Holy Sacrifice turned toward the congregation.

What are the advantages of standing at the altar ad orientem, as I have experienced them over the past two years? I can think of ten straight off:

1. The Holy Sacrifice of the Mass is experienced as having a theocentric direction and focus.

2. The faithful are spared the tiresome clerocentrism that has so overtaken the celebration of Holy Mass in the past forty years.

3. It has once again become evident that the Canon of the Mass (Prex Eucharistica) is addressed to the Father, by the priest, in the name of all.

4. The sacrificial character of the Mass is wonderfully expressed and affirmed.

5. Almost imperceptibly one discovers the rightness of praying silently at certain moments, of reciting certain parts of the Mass softly, and of cantillating others.

6. It affords the priest celebrant the boon of a holy modesty.

7. I find myself more and more identified with Christ, Eternal High Priest and Hostia perpetua, in the liturgy of the heavenly sanctuary, beyond the veil, before the Face of the Father.

8. During the Canon of the Mass I am graced with a profound recollection.

9. The people have become more reverent in their demeanour.

10. The entire celebration of Holy Mass has gained in reverence, attention and devotion
Posted by Fr. Allan J. McDonald at Sunday, December 19, 2010

Fr., are you sure you don't want to re-visit Calvin's doctrine of Total Depravity? LOL!

More seriously, if one presupposes that the people are educated about the Tridentine Mass and about ad orientum generally, and that they understand the ancient Judaeo-Christian tradition of the worship leader/Priest and the concept of in Persona Christi,then the Latin Mass and the ad orientum are just as participatory (even more so) as the OF. Ad Orientum (and Latin) is more contemplative, requires some work on the part of the worshippers, and is more conducive to reverence. Although I enjoy the OF and would not want it to go away completely, I'd like for there to be at least one Tridentine High Mass every Sunday.

I agree, especially about the education part. I watch the priest closely and try to follow what he's doing and that would be more difficult Ad Orientem. However, I wonder if I may be distracting myself or being a little mentally lazy. Both would be a good thing. Maybe when there is a service with lots of non-Catholics in attendence, e.g. a wedding, it would be better to have the OF so they could participate a little more.

And you could see them tippling in the back rows.

RCG, "Both would be a good thing..." You mean your being mentally lazy and distracting? LOL!

Yeah, I saw that when it posted. I guess I am my own best example.

You remind me of my grandfather. He would correct letters and send them back.

pin wrote "Although I enjoy the OF and would not want it to go away completely, I'd like for there to be at least one Tridentine High Mass every Sunday."..ditto here. I agree.

The MAIN advantage of OF is that the congregation can SEE what's happening on the alter...and that DOES effect it's intended purpose.

Yeah! Happy Birthday! You can get a little early 'nog this evening.

I see no advantage to versus populum orientation. It's perceived "advantages" are all actually distractions which serve to undermine the prupose of the Mass, making it a self defeating action.