The Latin Rite has always had a diversity of rites in it, meaning that the Mass in each of these rites had its own peculiarities. In addition to these are the various rites of the Eastern Church in union with Rome. These Eastern Churches are as Roman Catholic as the Latin Rite and its various "rites." You can read about the various rites by PRESSING VARIOUS RITES HERE.

In the Latin Rite even more diversity is becoming acceptable and not causing a blink of an eye. The legitimate return of the "unreformed" Mass, known as the Tridentine Mass and now the Extraordinary Form Mass may be celebrated without permission from one's bishop thanks to Pope Benedict. So many parishes today celebrate both the reformed Catholic Latin Rite Mass, known now as the Ordinary Form (regular, usual) and the Extraordinary Form to meet the pastoral needs of one's parish community.

In addition to this, the pope has allowed and is allowing the development of an Anglican Use Mass based upon the liturgies of the Anglican Church, known here in the USA as the Protestant Episcopal Church. Episcopalians and Anglicans can return to the full communion of the Catholic Church and maintain their "patrimony" of liturgy much of it going back to the time when the Anglican Church was still in full communion with the Pope. King Henry VIII's separation from the Church of Rome initially maintained all that was Catholic until he killed off the Catholic hierarchy loyal to the Pope and the Protestant Reformation began having a deleterious effect upon the Anglican Liturgy and its sacraments, including validity of Holy Orders and thus Confirmation and the Holy Eucharist.

Eastern Rite Catholic Church showing Iconostasis, behind which is the altar 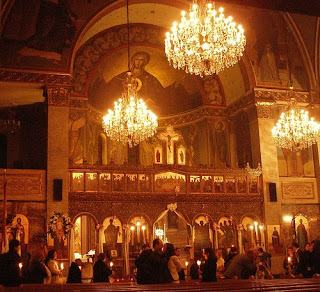 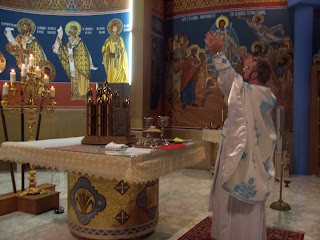 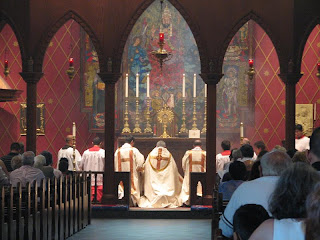 Extraordinary Form of the Catholic Mass 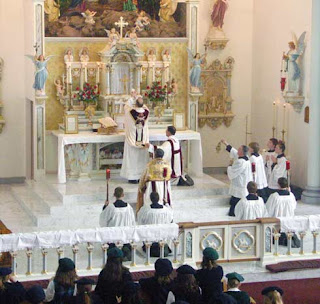 Anglican Use Rite of the Catholic Mass

Ordinary Form of the Catholic Mass 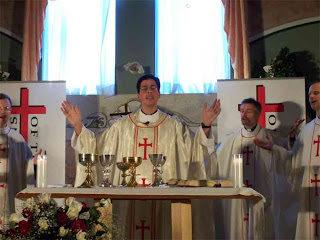 So, these Anglicans can come into communion with our church- this means they see the Pope as the authority? That they believe the bread and wine change to the body and blood? No RCIA, nothing?

Lori, I don't know all the details, but with the clergy, they must go through some Catholic training as it regards canon law and doctrine that is specific to being in full communion with the pope. Most of these Anglicans are very high Church Anglican and in some ways "more Catholic than the pope!" They believe in the real presence and even in transubstantiation. As far as individual lay Anglicans, yes, they would need to go through catechesis and if whole congregations come into the Church I could see that happening on a congregational level. And yes and most sticky (since divorce was the reason for King Henry breaking from the Pope) issues of canon law concerning the Sacrament of Marriage and any irregular marriages of these Anglicans must be addressed. I am eager to learn myself how all that will occur. In some cases the Anglicans are giving up much more than they are gaining in terms of the Church building, family relations, etc, but they are gaining the full communion of the Church and that's more important.

Oh ok! I was worried it was an "alright! You're in!" Which... would kinda tick me off. I worked hard to become Catholic :P I feel there is enough "catholics" who don't believe fully we don't need to add to them! But if they believe fully, Bring them on!

The Rites of the Eastern Catholic Churches are not "diversities" within the Latin Rite. They are proper Catholic rites in and of themselves.

Fr. Ron Roberson, CSP, writes in his book "The Eastern Christian Churches," "One of the documents of the Second Vatican Council, Orientalium Ecclesiarum, dealt with the Eastern Catholic churches. It affirmed their equality with the Latin Church and called upon Eastern Catholics to rediscovertheir authentic traditions." (page 134)

Fr. Roberson notes also, "It should be mentioned that in the past the Eastern Catholic churches were often referred to as "uniate" churches. Since the term is now considered derogatory, it is no longer used." (page 134)

[Fr. Roberson rec'd a doctorate from the Pontifical Oriental Institute in Rome after defending his thesis on Contemporary Romanian Orthodox Ecclesiology. From 1988 to 1992 he was a member of the staff of the Vatican's Council for Promoting Chirstian Unity, where he worked in relations with the Orthodox. He is now Associate Director of the Secretariat for Ecumenical and Interreligious Affairs at the USCCB.]

Clavis, I think there is a diversity of opinion on describing the Eastern Rites of the Church as Roman Catholic. Those who choose this designation say that if one acknowledges the Bishop of Rome as the Universal visible head of the Church, that makes you Roman Catholic. Our retired bishop of Savannah, Raymond Lessard was always quick to correct the pastor in Augusta who was bi-ritual when he said that the Easter Rite Melkite Church he pastored wasn't Roman Catholic. Bishop Lessard said it was. I recently listened to Archbishop Timothy Dolan on the radio show "Conversation with he Archbishop" say the same thing. Apart from that your other insights are good.

Note - "i.e. a Catholic who belongs not to the Roman, but to an eastern Rite."

With all due respect to your Bishop Lessard, members of Eastern Catholic Churches are not "Roman" Catholics.

Key, Chiave, Roman Rite and Roman Catholic are two different descriptions, one particular and one general. Roman Rite refers to the Latin Rite Mass and tradition, Roman Catholic refers to all Catholics both in the West and in the East who acknowledge the Pope, the Bishop of Rome, as the head of the Universal Church.

There are many devout Anglicans (Episcopalians) who have long been fed up with the unbelief that has usurped their tradition. They should have very little trouble making the transition and should be given some kind of Catholic education and welcomed with open arms. This is also true of many Lutherans, who should also make the transition fairly easily.