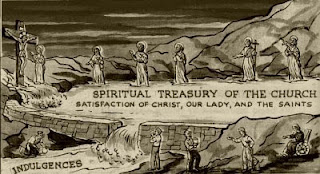 In light of Pope Francis not allowing those in irregular sexual unions be these civil marriages or simple cohabitation, but allowing by way of a footnote in His Holiness' Apostolic Exhortation, to still go to Confession and receive a partial absolution for a particular mortal sin for which there is true sorrow and repentance, should we not review what is actually practiced in the Church under the terms partial and plenary?

A plenary indulgence means that by the merits of Jesus Christ, the Blessed Virgin Mary and all the saints, the full remission of the temporal punishment due to sacramentally forgiven sins is obtained. The person becomes as if just baptized and would fly immediately to heaven if he died in that instant. A partial indulgence means that a portion of the temporal punishment due to forgiven sin is remitted. Partial indulgences are received either by doing some act to which a partial indulgence is attached (e.g. praying a partially indulgenced prayer), or by the incomplete fulfillment of the conditions attached to a plenary indulgence.

Of course the Baltimore Catechism speaks of perfect and imperfect contrition apart from Sacramental Confession, a sort of partial absolution that hinges on a future Confession.

We already know that there is partial and plenary communion with the Church which could be extended to Catholics who are in irregular sexual relationships either through a civil marriage or cohabitation:

I have had over the years a number of RCIA candidates (already baptized) who have not gone on to the Rite of Election or the Easter Vigil, but attend Mass each and every Sunday. Since they are in partial communion with the Church, they cannot receive Holy Communion. However, they are allowed to go to Confession and receive absolution. I have had a number of people in this situation. They are candidates for Plenary Communion but have not taken the final step toward it, but are baptized and have celebrated the Rite of Acceptance (Welcome) or the RCIA and they go to Confession and receive absolution regularly all the while being in partial communion with the Church.

If that person has an abortion or their male partner participates in that person obtaining an abortion, then both are excommunicated from the Church.

It seems to me that the pastoral solution that Pope Francis is proposing in "The Joy of Love" is that one can receive a partial absolution and a complete lifting of the excommunication attached to abortion by going to Confession even though they have not come to a point of repenting of their irregular and sinful sexual relationship.They are then forgiven of the abortion and the excommunication is lifted. But because this entails only partial absolution they are not free to receive Holy Communion.

So the final question I pose once again: Is the Church's teaching that all mortal sins must be confessed with sincere sorrow and a firm purpose of amendment as a means to a good and valid Confession simply a discipline of the Church or defined as an actual doctrine. If a doctrine, is it solemnly defined as a dogma. I've never thought about this before and simply took the teaching at face value. But should we?

I sincerely ask the final question for I am not sure that it is a dogma or defined doctrine, but simply a canonical discipline. Certainly one can be forgiven for a sin one is truly repentant of while not repenting of other sins. More importantly allowing those who are not free to receive a plenary absolution but only a partial absolution keeps them close to the Sacrament of Mercy but does not permit them to receive Holy Communion. So they are partially in communion with the Church in a sacramental way, because they are still baptized and still Confirmed but they are barred under normal circumstances from receiving Holy Communion, but they can still participate partially in the Sacrament of Penance by receiving a partial absolution.

Would this not keep them closer to the Church rather than pushing them further away by demanding an all or nothing approach to Communion with the Church?
Posted by Fr. Allan J. McDonald at Saturday, April 09, 2016

The idea of "partial communion" is false. There is no such thing. One is either in communion or out of communion.

The ideas expressed in this post contradict the teaching of Pope Pius XII.

22. Actually only those are to be included as members of the Church who have been baptized and profess the true faith, and who have not been so unfortunate as to separate themselves from the unity of the Body, or been excluded by legitimate authority for grave faults committed. "For in one spirit" says the Apostle, "were we all baptized into one Body, whether Jews or Gentiles, whether bond or free."[17] As therefore in the true Christian community there is only one Body, one Spirit, one Lord, and one Baptism, so there can be only one faith.[18] And therefore, if a man refuse to hear the Church, let him be considered - so the Lord commands - as a heathen and a publican. [19] It follows that those who are divided in faith or government cannot be living in the unity of such a Body, nor can they be living the life of its one Divine Spirit.

DJR, please explain then why in pre-Vatican II times Catholics could receive Holy Communion, Confession and Extreme Unction from Orthodox priests in an emergency or when no Catholic priest was available.

For the post Vatican II church to acknowledge the validity of Protestant baptism done correctly to form creates a Christian who is a Catholic but not in full communion similar the the Orthodox .

1) It is an emergency
2) Orthodox orders and sacraments are valid regardless of the interior disposition of the minister just as in the Roman Catholic Church because they enjoy the benefits of Apostolic Succession.