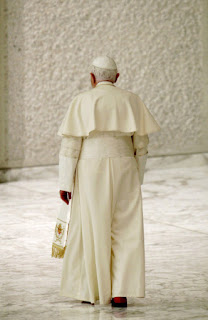 This is a what if question. I suspect there is consternation in high places of some quarters of Rome, the Vatican and the Church universal. What if a living emeritus pope, who appears healthier now than when he abdicated were to say he was compromised by a diagnosis of actual clinical depression or manipulation, internal or external,  to resign and the resignation wasn't truly freely given?

Or what if an emeritus pope who is sick and fading due to age, leaves a written testimony or even a video recording stating the same but isn't released until his death?

WHAT DO CANON LAWYERS OUT THERE HAVE TO SAY?

I know that it would cause a true schism in the Church but what else would it accomplish?

Has the Church ever undergone something similar in her long history?

But this is what the emeritus pope wrote shortly after Pope Francis was elected. This shows that conspiracy theories abounded immediately upon Pope Benedict's unexpected bombshell. Was the emeritus pope forced to write this even in retirement?????


Pope Benedict Addresses Rumors, Denies Being Pressured To Quit And Explains His Clothes

Retired Pope Benedict XVI says his decision to quit last year was his alone — that he wasn’t pressured, that he’s not the victim of a conspiracy and that any speculation otherwise is “simply absurd.”

Andrea Tornielli, a reporter for the newspaper, wrote to Benedict to ask about the speculation that still surrounds the decision to become the first pope to retire in nearly 600 years. According to the Vatican Insider website, which is operated by La Stampa, Benedict sent a written reply within two days.

Benedict also explained why he continues to wear the robes associated with the papacy.

“I continue to wear the white cassock and kept the name Benedict for purely practical reasons,” he wrote. “At the moment of my resignation there were no other clothes available.”
Posted by Fr. Allan J. McDonald at Saturday, April 30, 2016

With the state that the Church is in at present, I think that schism would indeed be a good thing. If there is no schism the liberals will continue to undermine the Church. This latest exhortation of the Pope is only the first of many. He has indicated for one thing that he wants to devolve the power of the papacy to local bishops and appears to be in favour of relaxing celibacy in the Church. The longer this situation is allowed to continue on, the worse it is going to become. Surely it is best to cut the liberals adrift and allow them to go their own way? Many Catholics no longer know what to believe anymore. In those dioceses where the bishop is liberal - and heaven forbid they receive devolved powers from Francis - there is soon going to be pressure on priests to give communion not only to the divorced and civilly remarried but also to those living together in an unmarried state, practising homosexuals, abortionists even.

If I was an orthodox priest in a liberal diocese, if it were possible, I would be opting to join a traditional order because priests in traditional orders will not have a congregation with members living in irregular situations where as many who attend the Novus Ordo Mass - because of a lack of catechesis are.

Regarding the clothes, I never thought about it before but Benedict's explanation makes a lot of sense. The expectation for so long has been that most popes die in office, so naturally it would make sense to chuck out all your old clothes.
The problem is, if you do resign, (a) you've got no non-papal clothes to wear, and (b) I'll bet there's no pension either, so you probably can't afford to buy any.

If his "abdication" was under duress, then the "abdication" was invalid (i.e. not an abdication at all). In that case he's still pope and Francis's election (and all subsequent official actions) are likewise invalid. Not a specialist in canon law, but that's my take on it.

You are not correct because Benedict was obviously forced out like the original book The Great Reformer and the words of Cardinal Godfreed Daneels and Theodore McCarrick. If Francis was NO problem why would all the FREEMASONS in Rome the head leader be so happy about his election and said THINGS WILL NEVER BE THE SAME IN THE CHURCH WITH THIS POPE.

Benedict should not have abdicated, full stop. What might have been a great papacy will be assessed by historians as a failure. He must have had a pretty good idea as to who would succeed him, so Bergoglio is in a real sense a Benedict creation.

Unfortunately, we've all got to live with it. Having lived through a period when all forms of dissent from Catholic orthodoxy in faith, morals and public worship were not only tolerated but actively encouraged, I don't expect anything much from the Vatican or indeed the Pope.

What if Benedict were to admit openly and publicly what he must be feeling--regret and remorse for his resignation--knowing now that, whatever his diminished capacity, his remaining on the cross of the papacy until the end could have spared the Church the odor of heresy that now wafts about its high places and spiritually imperils many of the faithful.

Just before we went into the general conversations when everybody can talk, a very interesting and influential Italian gentleman came to ask if he could come and see me, so I said “sure.”
He came to see me at the Seminary, at the American College where I was staying; and we sat down. He is a very brilliant man, a very influential man in Rome and we talked about a number of things. He had a favour to ask me when I get back to the United States, but then he asked,
“What about Bergoglio?”
I was surprised at the question, I said, “what about him.”
He said, “Does he have a chance?”
I said, “I don’t think so, because no one has mentioned his name, he hasn’t been in anybody’s mind, I don’t think it’s on anybody’s mind to vote for him.”
He said, “He could do it you know.”
I said, “What could he do?”
He said, “He could reform the Church, if we gave him five years, he could put us back on target. “
“Well, he’s 76.”
“Yeah, in five years, if he had five years. The Lord working through Bergoglio in five years could make the Church over again.”
I said, “That’s an interesting thing.”
“I know you’re his friend.”
“Well, I hope I’m his friend.”
He said, “Talk him up.”
That was the first that I heard from people that Bergoglio would be a possibility in this election.
(...)
I hope that the new, that the one who is elected Pope, will be someone who, if he is not himself a Latin American, would at least have a very strong interest in Latin America”. “Was that part of it? Who knows? What is it my friend said? “Push Bergoglio”? Did he say it to a lot of people? I don’t know.”

Gustavo Raffi, Grand Master of the Grand Orient of Italy

"With the election of Pope Francis nothing will ever be the same again. With Pope Francis, nothing will be more as it was before. It is a clear choice of fraternity for a Church of dialogue, which is not contaminated by the logic and temptations of temporal power"
“A man of the poor far away from the Curia. Fraternity and the desire to dialogue were his first concrete words. Perhaps nothing in the Church will be as it was before. Our hope is that the pontificate of Francis, the Pope who 'comes from the end of the world' can mark the return to the Church-Word instead of the Church-Institution, promoting an open dialogue with the contemporary world, with believers and non-believers, following the springtime of Vatican II."
"The Jesuit who is close to the least ones of history," Raffi continues, "has the great opportunity to show the world the face of a Church that must recover the announcement of a new humanity, not the weight of an institution that closes itself off in defense of its own privileges. Bergoglio knows real life and will remember the lesson of one of his favorite theologians, Romano Guardini, for whom the truth of love cannot be stopped.
"The simple cross he wore on his white cassock," concludes the Grand Master of Palazzo Giustiniani, "lets us hope that a Church of the people will re-discover its capacity to dialogue with all men of good will and with Freemasonry, which, as the experience of Latin America teaches us, works for the good and progress of humanity, as shown by Bolivar, Allende and José Martí, to name only a few. This is the 'white smoke' that we expect from the Church of our times."

Pope Benedict's abdication is a mystery. The political goings on in the Vatican are the stuff of history. At least one Pope I can think of was forced out and starved to death as a prisoner. So it is not beyond imagining that some subterfuge would have taken down a German pope and it is cold comfort to know this is not novel in the history of out Church. I wish I could have helped, that he could have used a Draconian lieutenant to be the vinegar to his sugar. Oderint dum metuant.

So what do we do? We soldier on. On the night before I enlisted my father, a navy man, told me that the captain was a SOB, but he was his SOB. We may have that situation at times over the glorious millenia of Church history and those situations are proof, if any is needed for the secular world, that Holy Mother Church is defended by the Holy Spirit.

Had Pope Francis focused on promoting the virtues of charity, humility and evangelical poverty, he could have been a very effective pope. Those were said to be his strengths, after all. But instead, he's chosen to actively promote as much doctrinal and pastoral confusion as possible. To what end? I'm still looking for the silver lining, and I do catch glimpses now and then, but on the whole, this is just a disaster for the Church at a time when she is not positioned to endure it.

Dialogue, I think the silver lining will be that when the next Pope restores things to how they should be that will be the cue for the liberals to finally leave. They are having their day and they will not want to give it up. Although the modernist scourge was there before, it has been growing steadily since Vatican II. Everything in the Church has been gradually undermined and this Pope is the culmination of it.

But one good thing that I have noticed, especially since the new exhortation, is that some priests are finally using their sermons to start catechising the people. I heard a sermon yesterday dealing with the fifth commandment where the priest said that abortion was murder as was contraception, etc. This is the first time for decades, outside of attending the EF Mass, that I have heard a sermon touching on moral issues. Deo gratias.

The Cardinals will not be tricked again at the next conclave. They have seen what a modernist can do. Prayer for conversion or the end of this pontificate is the only way.