COPY CAT KILLERS? ARE THESE RELATED? 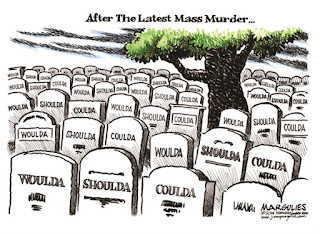 Last night in an Augusta suburb of Appling about 15 miles up the road from my mother's townhouse, five members  of one family ranging in age from 85 to 31 were murdered by another family member who then killed himself making a total of six.

The day before it was widely reported that eight family members had been murdered by another family member in Ohio.

Are the two related and is sensational reporting about these mass killings inspiring copy cats? To what extent does the news media have to be prudent in reporting these things and do all mass killings have to be nationally televised by the cable networks.

Prior to cable news, these kinds of news stories were simply local or a short story in the newspaper and mentioned in the half hour evening news. But today with the incessant reporting of cable news that turn tragedies into reality shows for ratings, we are seeing something very, very ugly, almost demonic.

Other than cable news companies making a decision not to turn these things into reality shows for entertainment and giving great celebrity to the culprits, I don't know what can be done.
Posted by Fr. Allan J. McDonald at Saturday, April 23, 2016