BOMBSHELL!!! SSPX NORMALIZED AND POPE FRANCIS ORDERS MAJOR REFORMS FOR THE ORDINARY FORM OF THE MASS TO MAKE IT MORE IN CONTINUITY WITH THE EXTRAORDINARY FORM 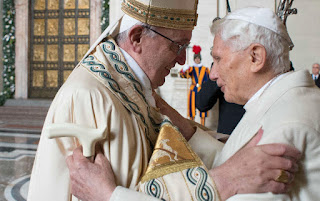 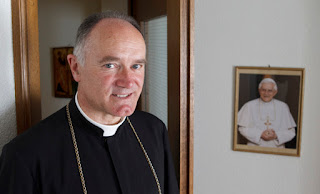 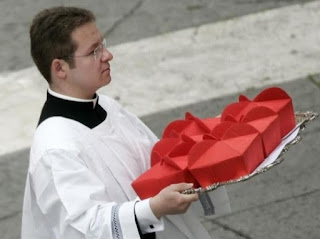 Vatican Radio announced this morning that in this Year of Mercy, Pope Francis has completely reconciled the SSPX with the Church. It will become known as the SSPX Ordinariate allowing its bishops, now fully inegrated with the See of Peter, to establish dioceses all over the world. Archbishop Fellay, who may be named a cardinal soon, will head the Ordinariate.

In the press release, the Holy Father stated that the wide ranging agreement with the SSPX acknowledged on both sides what Pope Benedict had declared on 7/7/07 that there now exists in the Latin Rite of the Catholic Church two major forms of the Liturgy, the Extraordinary Form from antiquity and the new Ordinary Form which is still a work in progress. The Holy Father stated that the (Anglican) Ordinariate's new Roman Missal is the template for revising the current Ordinary Form Roman Missal which is in desperate need of revision. In doing so it will restore the tradition of organic continuity with the historic liturgy of the Church developed organically over the course of centuries by the power of the Holy Spirit.

The Holy Father's communique also stated that Vatican II as a pastoral council is not dogmatic in the areas of the Church's relationship with Christian sects that have separated from the Catholic Church as a result of the Reformation and subsequent divisions in Protestantism and Catholicism. The same is true of the Church's relationship with Jews, other major world religions and how the Church relates to agnostics and atheists and the secular world in general. There can be a multiplicity of opinions concerning the right course of action and nothing can be placed in concrete that in any way would call into question that "Outside the Catholic Church there is no salvation" although elements of the Church exists in every person and institution even those professedly atheistic.

The Holy Father also urged all the bishops of the world to reread Pope Benedict's Summorum Pontificum and its accompanying letter. He urged all Cathedrals to have at least one scheduled EF Mass and that all Ordinary Form Masses be celebrated from start to finish "ad orientem" or with the bishop or priest joining the laity in facing the altar in the same liturgical eastern (orientem) direction.

This the Holy Father said would absolutely and once and for all crush the liturgical clericalism of the ordained that has crept into the Church and reformed Mass with the advent of the altar being turned into a sort of "television set news desk" and enabling the showmanship of the priest who uses the Sacred Liturgy for his own latent tendencies to be a celebrity.

He also urged the bishops of the world and their priests not to clericalize the laity even if they kneel before them asking to become clericalized in the liturgy and the life of the Church. The Holy Father stated that we need the laity to be the laity and we need the clergy to be the clergy each part of the same body but with different functions. The laity's function is not churchiness in the institution of the Church but the Church charismatic at home, work and in the public square faithfully carried out by informed laity that are both a sign of orthodoxy and orthopraxis.

The Holy Father also urged bishops to make sure their priests "read the black and do the red" and do so ad orientem in their parishes. He urged that at least one Sunday Mass in every parish be an EF Mass to help all priests to celebrate both forms of the Mass in a "style of continuity" as His Holiness stated it.

The Holy Father also insisted that priests and religious wear the clothes appropriate to their state of life in the institutional Church, that of the cassock for the priest even in secular settings and the full habit for men and women religious. He stated that the full veil for women religious is a powerful sign of their consecration and authority in the Church similar to the veil that bishops of Eastern Orthodoxy wear. In this regard, His Holiness who has already lifted Mother Angelica as a saint of the Church in heaven, praised Mother Angelica for her decision to return her order to the use of the full habit. His Holiness said she looked like a nun both in life and in death.

The Holy Father said that with both forms of the Latin Rite being celebrated in the same direction there would appear to be a continuity between the two forms of the one Latin Rite. He also urged the Congregation for Divine Worship to promulgate a new GIRM and rubrics for the Ordinary Form where by the Propers and fixed prayers of the Mass that are spoken or sung be done so exclusively in Latin. His Holiness also, with a bit of humor, stated that he knew that the Kyrie wasn't Latin but Greek and that it should not be translated to Latin but remain in Greek which of course is the original language of the Mass. He praised the Greek Orthodox Church for maintaining the Greek Liturgy and longed for the day that the East would submit to the authority of Saint Peter on bended knee although His Holiness stated that he understands standing as a sign of being raised up in Christ. But His Holiness mused that even if a person receives Holy Communion laying in his death bed and pledges obedience to the pope prostrate, that he is still "raised up in Christ" just as being on the bended knee is also being raised up in Christ. It is symbolic and not to be taken literally in order to undermine the altar railing and kneeling at it for Holy Communion or devotional, pious prayer and contemplation.

The Holy Father also insisted that the altar railing should be restored and kneeling for Holy Communion become the norm once again. "In no way is the altar railing a barrier between the clergy and laity but rather an extension of the altar itself, the laity's altar, which they approach and can touch and kiss as the priest touches and kisses the altar of sacrifice."
Posted by Fr. Allan J. McDonald at Friday, April 01, 2016

This is wonderful - just a shame it is April 1st. We can dream.

You have nothing better to do? The Church is in complete collapse and you post an attempt at humor based on this pope's liberalism. A liberalism which is wounding the Body of Christ further. It's not funny and satire isn't appropriate considering that this time next week there is the very real possibility of a pope rationalizing and accepting mortal sin. You would have done a better service to souls if you had reposted Mother Angelica's spot on speech expressing herjustifiable anger and outrage at what the liberals in the Church have done.

Catholics have a sense of humor and authentic Catholics know life is temporary for individuals and the world!

Pope Francis does continue to reintegrate the SSPX which means eventually their concerns about VII will be legitimized. Pope Francis approved of the Ordinariates new missal which clearly restores EF elements to a basic OF Mass.

Pope Francis has not suppressed the EF Mas which is celebrated daily in St. Peter's in various degrees of solemnity.

And Pope Francis will not change dogma or doctrine but may well open new paths of outreach for those in public sin.

"And Pope Francis will not change dogma or doctrine but may well open new paths of outreach for those in public sin."

What does that mean? After 2000 years are we suddenly to ignore the Ten Commandments, the words of Christ Himself, the words of St. Paul and countless Saints and councils all because one liberal bishop has decided that he is right and that the Church has been wrong! That Christ has been wrong! He can't teach that we are to embrace the "goodness" in adultery and sodomy, excuse them, not call for those people to abandon their sins, repent and believe in the Gospel. Because there is no good in an evil act. Francis or you cannot justify adultery, sodomy or sacraligeous communions or confessions all in the name of false mercy. Neither of you is God and you can't change Truth. Catholics in mortal sin cannot receive communion without amendment of life and confession. You can't change that and neither can Bergoglio. Your erroneous argument is that practice doesn't change doctrine. The Church teaches that adultery is wrong but those in adultery don't have to confess it and can receive communion. Is that about what your argument is. So in other words I can say I am not a racist but I could then justify referring to black people using the "N" word? Is that okay.

Happy April Day to you too

I. By counsel
II. By command
III. By consent
IV. By provocation
V. By praise or flattery
VI. By concealment
VII. By partaking
VIII. By silence
IX. By defense of the ill done

I am sticking to what the Church has always taught. And if Pope Francis dares to teach anything to the contray I will resist.

Not that you have let the pontifical secret out but only partially, the truth is. That there will be a new diocese carved out of the two others with Macon as the see city and st. Joseph as the cathedral and me as the bishop! I had so wanted a more solemn announcement but the Francis effect takes over!

My luck I will bar transferred to some small insigficant surburb and miss becoming the rector of the new cathedral in Macon! April fools?

This is awesome. I wish I had bait this good for my next trip to the shore.

I'm so tired of hearing this rumor / dogma that tradition is back in the church what a dream.
If some sort of traditionalist group makes a deal who cares... there all working together behind closed doors and any agreement will end up throwing the faithful under the bus. .. nothing new to see here.

What more could one desire...?

For those attacking Father McDonald's April Fools joke, consider this one. This one is truly terrible.