CAN A POPE BE ALL THINGS TO ALL PEOPLE, PASTOR, POLITICIAN, ADMINISTRATOR?

Still, there’s an unavoidable irony about the fact that a pope elected in part to remedy a perceived “governance gap” could end up being seen instead as having perpetuated it. 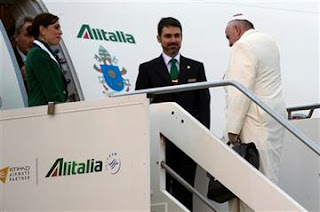 John Allen has an insightful article in today's CRUX about the same-old, same-old, when it comes to Byzantine maneuvers in the Vatican administration which you can read by pressing this sentence.

It appears, perhaps, that Pope Francis doesn't truly care about being a good administrator and maybe has thrown his hands up in disgust at the behind the scenes Byzantine maneuvers which characterize how Italians do things (and I can say that as a half Italian whose brain is all Italian and was born there in Naples of all places).  The corruption and power plays in the Vatican escalated under Pope Saint John Paul II who was not known to be a good administrator and absent from Rome a good amount of the time. Things really got dicey when his health compromised him for so many years.

Pope Benedict wasn't a good administrator either. He relied on poor choices to do that, cardinals that did not serve him well whatsoever despite the Holy Father's loyalty to them.  Pope Benedict was an intellectual and an absent administrator preferring his books and the Liturgy and the trappings of the papacy.

And it now appears that Pope Francis might not be a good administrator and his absences are more political in thrust, although Pope Saint John Paul II was political too as it concerns his role in the collapse of communism in Poland and Eastern Europe and the Soviet Union--you can't get any more political than that!

Here are some money quotes from John Allen's article which you can access HERE:

Through both word and deed, Francis has a remarkable knack for finding ways to move the ball on the social and political causes he cares about most.

Francis has become so globally visible and consequential, it’s sometimes easy to forget that he wasn’t elected to the papacy in March 2013 primarily to solve Europe’s refugee crisis, or to fight climate change, or to pave the way for Cuba and the U.S. to restore diplomatic relations.

When the cardinals huddled in the conclave three years ago, their diagnosis was instead that internal ecclesiastical governance had been adrift in the Vatican for quite a while, really since the late John Paul II years, and among other qualities they wanted a new pope who would get the system under control, choking off future scandal and making sure Rome set a positive example for the Church rather than offering a case study in what not to do.

Of late, however, there have been reminders that Francis’ success on the global stage is not really matched by comparable breakthroughs as a manager.

Over the past quarter-century, two areas above all have generated persistent scandal and heartache for the Vatican, and were waiting for a new pope to take up: The child sexual abuse scandals, and money.

Joseph Ratzinger was certainly an intellectual, but in a quarter of a century at the head of the most important dicastery he showed an administrative competence and a grasp of detail which made him the most important figure in the Vatican after the Pope. John Allen wrote a biography of him that was unremittingly tendentious, critical and wrong-headed since it viewed the Church through the distorting lens of US liberal Catholicism. He later admitted the book unjustly vilified the cardinal, although he agreed to its being reissued (without corrections) after Ratzinger was elected pope.

I see no evidence that Pope Francis is a media superstar in the way that JP II was in the 1980s. Outside the Church the vast majority know little about him and care less. He scarcely gets a mention on the BBC now that he has lost his novelty value and his controversial comments only exercise that small minority of Catholics who read the Catholic press or follow Catholic blogs.