AM I SAYING "THE LORD BE WITH YOU" OR SIMPLY PRAYING IN THE ORANS POSITION? I SHOW; YOU DECIDE

Maybe I'm celebrating the Mass as I knew I would in the future. My clairvoyance started early as you can see.

If I am saying anything, it is in Italian in this early 1954 photo from our apartment terrace, a rather large one at that, in Naples, Italy. 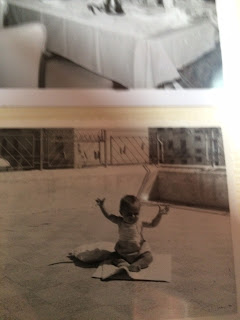 Although my parents, brother and sister moved there in about 1951 or 52, I was born in late 1953 and we stayed until about 1957. We moved from Naples (actually Vomero which overlooks Naples) to Atlanta's Fort McPherson and the rest is history, a child of a Canadian father who became a naturalized immigrant American and an Italian Mother who was from Livorno in Tuscany who happened to be living in Naples because my father was stationed there, grew up in Georgia. This should explain any defects of personality I have!

These are the views we had in Vomero!!!! I still remember these views especially all the ships in the bay, which in the early 1950's would have been packed with them and their horns sounding. In fact when we moved to Atlanta I thought the train horns I heard there were ships. 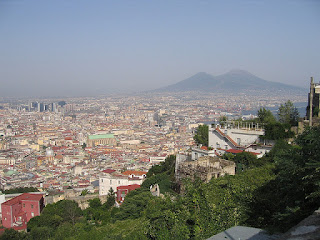 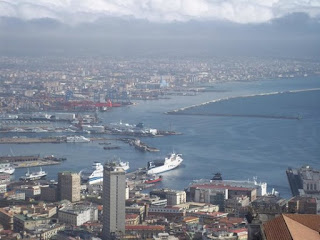 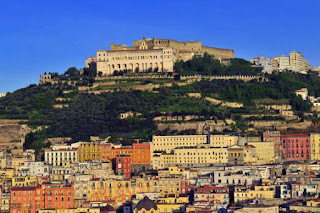 Or... Mama Mia! It's time to change this pannolino!

You should be facing away from the camera.

I was just proving how ahead of my time I would be!!!

Actually I am saying in broken English "What sa matta with you?"

Actually we lived in Vomero which is high up overlooking Naples and its bay as well as Mt. Vesuvius, truly one of the more spectacular views in the world. I would have lived there from 1953 to almost 1957. I recall looking at Mt. Vesuvius, being enamored by all the ships and sounds of ships especially, in the harbor area. I have some recollections of being in the car and looking outside.