SIX DEGREES OF SEPARATION, IN THIS CASE, SAD DEGREES

Six degrees of separation is the theory that everyone and everything is six or fewer steps away, by way of introduction, from any other person in the world, so that a chain of "a friend of a friend" statements can be made to connect any two people in a maximum of six steps. It was originally set out by Frigyes Karinthy in 1929 and popularized by a 1990 play written by John Guare. 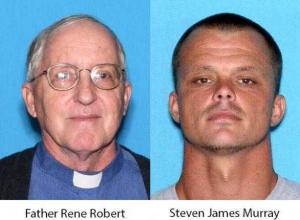 I take Mondays as my day off in Augusta, about two hours from Macon. About two weeks ago there was front page news in Augusta concerning a man who had been arrested in Aiken, South Carolina, about 16 miles from Augusta, after a seven hour manhunt. He had stolen Father Rene Robert's car, a priest stationed in Jacksonville, Florida and driven it to Aiken. The priest was missing.

I called a good friend of mine, a priest in Pensacola who had been a priest for the St. Augustine Diocese to ask if he had heard about the missing priest. Of course, he knew him personally and was distressed about the case. I informed him that a suspect had been arrested near Augusta that morning after a seven hour manhunt which terrorized the neighborhood where it occurred.

Later in the week, one of my elderly parishioners had fallen and broken her hip. When I went to visit her in the hospital, her daughter was there. She lives in Jacksonville. At the end of my visit, she says to me that I need to pray for a priest she knows who is missing. She said is name is Father Rene Roberts and he helps say Mass in her parish. He's 71 and retired but helps in various Jacksonville parishes and is involved in prison ministry. Then I told her that I knew about him because the person who stole his car ended up in Aiken and was arrested and Aiken is very close to Augusta, a part of the metro area.

Then this past Monday when I was in Augusta, the headline news on the local television was that Fr. Robert's body had been discovered in the woods about 20 miles from Augusta, in Burke County, Waynesboro, Georgia.

He had been brutally murdered, shot several times in the head and unrecognizable. God rest his soul.

In Augusta and Jacksonville this has been front page news for almost two weeks now. This is the latest that is on the front page of the Augusta Chronicle this morning:


WAYNESBORO, Ga. — Bond was denied Wednesday for a former Aiken County man linked to the disappearance of a Florida priest and facing a charge of malice murder.

BIANCA CAIN JOHNSON/STAFF
Steven James Murray leaves the Burke County courthouse after he was denied bond on Wednesday. Murray, a former resident of Aiken County, told reporters he has mental problems but did not elaborate on the statement.

Steven James Murray, 28, now of Jacksonville, Fla., appeared in court in Burke County because that’s where remains, believed to be the Rev. Rene Robert, of St. Augustine, were found Monday. Murray had led authorities to the body, but authorities requested dental records before making a positive identification. That could happen Thursday.


An autopsy indicated the victim had multiple gunshot wounds, authorities said, but neither Burke
County Sheriff Greg Coursey nor Special Agent-in-Charge Pat Morgan, of the Georgia Bureau of Investigation, would elaborate. Morgan did say Murray had appeared “relaxed” during his interviews with GBI agents and had answered all their questions.

As Murray, handcuffed and wearing a red jumpsuit, left the courthouse heading back to the Burke County Jail, he told reporters he has mental problems. He did not comment further.

Three states are involved in the disappearance of the priest whose car Murray is believed to have used to travel from the Jacksonville area to Aiken County, where he once lived.

Although Robert was last seen April 10, it was two days before he was reported missing when he failed to show up for a funeral. That same evening a man believed to be Murray led Florida police on a chase on Interstate 95 in Robert’s car, but got away.

About 5:20 p.m. April 13, multiple law enforcement agencies in South Carolina working on a tip discovered Murray in Robert’s vehicle near Snipes Pond and Wire roads. Murray drove away but crashed the car, then fled on foot, prompting a manhunt. He was soon taken into custody.

In addition to a murder charge in Burke County, Murray faces charges of possession of a firearm by a convicted violent felon and receiving stolen goods less than $10,000 in Aiken County.

When Murray was arrested by Aiken County authorities, he had several guns, including two double-barrel shotguns, a pump action rifle and several BB guns, that had been stolen from a Wire Road home earlier that day.

An hour before Murray’s capture, police responded to the home for a fire, which officials suspect is arson, and discovered multiple guns had been stolen.

I just read seconds ago (from a news story published last week) the following from Father Roberts' younger sister:

"All week, we have been waiting to hear if we should come down. He's a wonderful person. If you ever need anything, you would call my brother. (He) loved people, loved life, loved the Lord very much."

"She said her brother lives to serve. He went on mission trips, teaches at the Florida School for the Deaf and the Blind and will help anyone he can.

"No matter who you are, he would help you. And I think that's how it's gotten him into trouble a little bit," Bedard said."