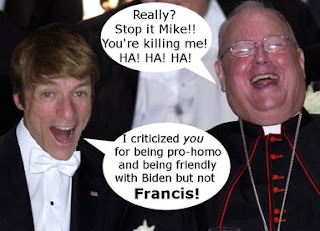 Religious leaders who constantly rail against sexual issues sometimes are trying to convince themselves given their own temptations. Think Jimmy Swaggert.
Usually, though, this occurs in fundamentalist communities of clergy and laity. But it seems that many converts or reverts to Catholicism have fallen into this Protestant fundamentalist mentality when it comes to morality and outing this, that and the other.

And thus we have this sad scenario. Please pray for him. He is gifted and talented and despite his past he could still serve the Church well if he moves away from being a Catholic FBI in terms of all sexual things immoral and simply and humbly submits to the fact we are all sinners in need of God's grace and forgiveness and where sin abounds God's grace is greater.

O happy fault of Adam, O necessary sin which gained for us so great a Savior. Fundamentalists wold not agree with this line from the Easter Exultet.


Critic of LGBT causes admits past sexual relationships with men


Michael Voris of “Church Militant” acknowledges sexual relationships with men in his thirties, claiming that the Archdiocese of New York was ready to “out” him.

One of the Catholic Church’s most vocal opponents of LGBT causes published a video Thursday admitting that he had been in sexual relationships with other men in his past and accusing the Archdiocese of New York of plotting to out him.


“I will now reveal that for most of my years in my thirties, confused about my own sexuality, I lived a life of live-in relationships with homosexual men,” said Michael Voris, a traditionalist Catholic activist who runs Church Militant, an on-line news platform.

Voris claimed the Archdiocese of New York, which is a frequent target of his lengthy video broadcasts, was “collecting and preparing to quietly filter out details of my past life with the aim of publicly discrediting me.”

A spokesman for the archdiocese called those allegations “100 percent untrue” in a statement to the Catholic Herald.

Church Militant has an extensive history of attacking Catholic officials they perceive to be insufficiently orthodox – from Pope Francis, to Cardinal Timothy Dolan of New York, to the Knights of Columbus – especially on LGBT and pro-life issues.

Most recently, Church Militant published posts attacking Tony Spence, the longtime editor of Catholic News Services, who was asked earlier this month by officials at the US Conference of Catholic Bishops to resign.

Church Militant took issue with a number of Tweets posted by Spence that they considered pro-LGBT.

The organization wields influence because of the pugnacity of their attacks, and while some Catholic leaders have condemned Voris’ work, he nonetheless has received press credentials to some high profile Catholic events, including the October 2014 Synod of Bishops in Rome.

Voris has repeatedly criticized Dolan, calling for his resignation in December for his       handling of accusations of theft by a parish priest.

Last month, Voris traveled to New York City to protest Dolan’s serving as grand marshal of the Saint Patrick’s Day parade there, which for the first time allowed pro-LGBT groups to march following years of protest.

Dolan, considered a conservative member of the American hierarchy, defended his decision to march, saying that inclusivity was a Catholic value.

Voris, who was not given press credentials for the event, nonetheless found himself in front of Dolan and asked, “Do you have anything to say to loyal Catholics who find what you’re doing here a great scandal to the faith?”

Advertisement
Dolan replied, saying they were welcome to come to the parade, too, but Voris accused Dolan’s handlers of roughing up him and his cameraman.

Catholic leaders have distanced themselves from Voris and Church Militant.

In 2011, leaders in the Archdiocese of Detroit asked Voris to remove the word “Catholic” from his promotional materials and the World Youth Day officials warned that the organization was not on the official program. He was banned from speaking in properties owned by the Catholic Diocese of Scranton, and last year, Philadelphia’s Archbishop Charles Chaput called Church Militant “destructive.”

We have all fallen into sin. If a man repents of his sins should he refrain from speaking out against evil? Many of the great Saints were notorious sinners but after they repented they lashed out against offenses against God and became instruments of salvation for others. When God forgives us, no one can accuse us. St. Peter denied Christ 3 times, he repented and Our Lord made him the first Pope of His Catholic Church. I believe God has destined Michael Voris to be a great instrument for bringing back sinners to the Holy Catholic Faith. God has already granted Voris great mercy, this is only the next step for God's great plan for Voris.

I believe this too and that God delivered him from sexual addiction and paganism is a sign of this. But he needs to be less acerbic in his condemnation both of himself prior to his conversion and of others--there is a way to call people to repentance in a way that doesn't alienate in the process or created a schism between himself and the bishops. That is a great mortal sin too and if all mortal sins are equal in gravity, sexual promiscuity ranks right up there with sins against charity, even against bishops one might find less than ideal.

Grandiosity often affects people who have made a major, traumatic transition in their lives. It is noted in people like Glenn Beckk who speaks freely of his own past "indulgences."

"Grandiosity refers to an unrealistic sense of superiority—a sustained view of oneself as better than others that causes the narcissist to view others with disdain or as inferior—as well as to a sense of uniqueness: the belief that few others have anything in common with oneself and that one can only be understood by a few or very special people."

That's Voris and Beckk (and others who are similarly obsessively self-righteous).

1.The person exaggerates talents, capacity and achievements in an unrealistic way.

2.The person believes in his/her invulnerability or does not recognize his/her limitations.

3.The person has grandiose fantasies.

4.The person believes that he/she does not need other people.

5.The person overexamines and downgrades other people, projects, statements, or dreams in an unrealistic manner.

6.The person regards himself/herself as unique or special when compared to other people.

7.The person regards himself/herself as generally superior to other people.

8.The person behaves self-centeredly and/or self-referentially.

9.The person behaves in a boastful or pretentious way.

The difference between Michael Voris and current high ranking members of the Church hierarchy is that Voris acknowledged his sin as a SIN and received sacramental absolution as decreed by Christ and amended his life. While the members of the heiracrchy never acknowledge sins as sins but are attempting to defy Christ by teaching that we can no longer say that people living in objective sin are committing mortal sins.

Michael Voris is the tax collector KNEELING at the back of the Church beating his breast saying "Have mercy on me a SINNER". While other worldwide figures in the Church hierarchy are cunning in their attempts to overturn the teachings of the Church and the very words of Christ Himself. They use sly language to purposefully confuse souls. That is not of God but from the Prince of Liars.

There is a big difference between someone who embraces their cross and begs for forgiveness and amends their life then some bishops who rationalize sin.

People often deal with their own desires by acting out a strong reaction against the temptation. Anyone who has ever endured a lecture about bacon from a dieter can understand this. Alcoholics and drug addicts do the same and I suspect that when we are finally delivered from the current celebration of sodomy we will be surrounded by people every bit as severe as Mr. Voris.

As far as the unimpressive Archbishop of New York goes my question is this: if M. Voris is correct about his impending outing then was he wrong in his assessment of the Archbishop?

So, who's the fellow pictured at the top of this post?

That's a young Michael Voris and I suspect during the dark period prior to his reversion!

No, that is actor and former New Kid on the Block boy-band member Donnie Wahlberg.

"A spokesman for the (New York) archdiocese called those allegations “100 percent untrue” in a statement to the Catholic Herald."

"He (Voris) was banned from speaking in properties owned by the Catholic Diocese of Scranton, and last year, Philadelphia’s Archbishop Charles Chaput called Church Militant “destructive.”

The rough looking person pictured at the top of the post is Donnie Wahlberg. It's not Michael Voris. You are never going to win the Pulitzer by publishing shoddy information.

mea culpa, but not mortal sin since I thought it was him. Didn't mean to demean Wahhlburg!

What exactly is the point of the photo with Voris and Dolan. Is it your way of saying Voris is a hypocrite? How charitable. Michael Voris admitted that he sinned, went to confession and has picked up his cross. Has Cardinal Dolan given Michael a "Bravo" for doing that? No. He gives a "Bravo" to a man who is committed to living an immoral life. Who is the hypocrite?

So instead of rejoicing that someone has left a sinful lifestyle, all you do is point fingers. Real Church of mercy, there, Father.

It is one thing to discus theoretically if there are those who are in hell. But it is quite another to say someone is actually in hell or would be there even if that someone is speaking about themselves.

The fact of the matter is that Holy Mother Church has never ever said any particular person is in hell. She has no authority to say so and she can't even declare it infallibly. The only one we know of who are definitively in hell is Lucifer and the fallen angels. This is definitively defined.

The pope, however, can and does infallibly canonize saints, meaning he doesn't make saints but declare infallibly that whoever is being canonized is actually in heaven. But he can't do the same for hell!

Kinda always knew it, but it was none of my business, Voris however has attacked the S.S.P.X. and the TLM in the past which made me have noting to do with him.

I watched Mr. Voris and his public apology and well, it takes guts to say what he said and to that point I respect him. I wish however he would not attack the TLM and S.S.P.X. he would be more than welcomed by we Traditionalists, I have not been a fan of his because of these attacks but again he would be a great ally in the return of the TLM. One can be a faithful Roman Catholic and gay as long as you are celibate the Church has always stated that is the sex that is a sin not being gay. I am quite sure my friends throughout the centuries and even now there are good priests, bishops, Cardinals and yes even popes that were and are gay and live holy celibate lives.