YIKES, THIS IS CONCERNING IF TRUE BUT OF COURSE IT CAN'T BE!?!?!?

Ross Douthat who writes for The New York Times and is a commentator sometimes on CNN is not a flaming liberal nor a rigid conservative. But he does have some discomfort with our current pope and the direction in which we are moving with him. So this colors, I think, his lengthy essay in The Atlantic's May edition. I did not know about 1979 novel, The Vicar of Christ and the similarities it has with what the same named Pope is doing today. Scarey and Twilight Zone kind of stuff! 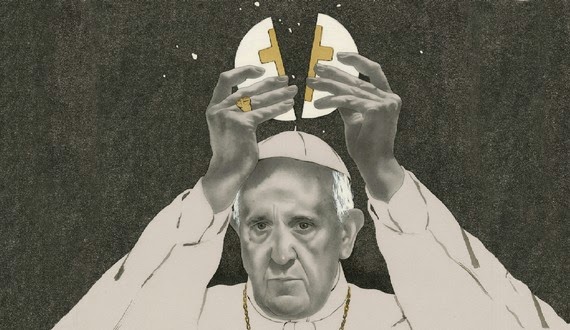 Will Pope Francis Break the Church?

The new pope's choices stir high hopes among liberal Catholics and intense uncertainty among conservatives. Deep divisions may lie ahead.
Ross Douthat Apr 18 2015, 8:47 PM ET
In 1979, almost a year into the papacy of John Paul II, a novel called The Vicar of Christ spent 13 weeks on the New York Times best-seller list. The work of a Princeton legal scholar, Walter F. Murphy, it featured an unlikely papal candidate named Declan Walsh—first a war hero, then a United States Supreme Court justice, and then (after an affair and his wife’s untimely death) a monk—who is summoned to the throne of Saint Peter by a deadlocked, desperate conclave.

Once elevated, Walsh takes the name Francesco—that is, Francis—and sets about using the office in extraordinary ways. He launches a global crusade against hunger, staffed by Catholic youth and funded by the sale of Vatican treasures. He intervenes repeatedly in world conflicts, at one point flying into Tel Aviv during an Arab bombing campaign. He lays plans to gradually reverse the Church’s teachings on contraception and clerical celibacy, and banishes conservative cardinals to monastic life when they plot against him. He flirts with the Arian heresy, which doubted Jesus’s full divinity, and he embraces Quaker-style religious pacifism, arguing that just-war theory is out of date in an age of nuclear arms and total war. (This last move eventually gets him assassinated, probably by one of the governments threatened by his quest for peace.)

Murphy’s book is mostly forgotten, but his hook, the idea of a progressive pope who sets out to bring sweeping change to Catholicism, has endured in the cultural imagination. The priest-novelist Andrew M. Greeley’s 1996 potboiler White Smoke, for instance, culminates in the election of a modernizing Spanish cardinal, whose conservative opponents are undone by the wily politicking of two Irish American prelates. Two years ago, Showtime shot a pilot for a series called The Vatican, in which Kyle Chandler (a k a Coach Taylor from Friday Night Lights) played a rising-star New York cardinal with progressive views—only to spike the show, perhaps feeling overtaken by events, 10 months after Pope Benedict XVI unexpectedly resigned.

The possibility of a revolutionary pope isn’t one that most Vatican-watchers have taken seriously, and not only because a college of cardinals with members appointed by John Paul and Benedict seemed unlikely to elevate a true wild card to the office. The reality is that popes are rarely the great protagonists of Catholic dramas. They are circumscribed by tradition and hemmed in by bureaucracy, and on vexing issues Rome tends to move last, after arguments have been thrashed out for generations.
READ THE REST OF THE ESSAY AT THE ATLANTIC MAGAZINE BY PRESSING HERE.
Posted by Fr. Allan J. McDonald at Sunday, April 19, 2015

The fictional Papa Francesco excommunicates Spain! Maybe the real one will be tempted to excommunicate Germany (or for that matter San Francisco).

Dear Father, I know you try very hard to defend this current Pope I will not hide the fact of my lack of should I say love and belief in him, for I have none,I hope you can accept my opinion for that is what it is my opinion. Since day one when he stepped out onto the loggia and quickly removed the stole given to him by Guido Marini at that moment I knew we were indeed in BIG trouble. So Father in all that has happend since his election from don't judge me to the destruction of the Franciscans of The Immaculate, how do you really feel about him and please please be honest.

Many are concerned that Francis is in the midst of an attempted reform. As pointed out in Crisis magazine his papal bull on mercy seems to advocate mercy without repentance. All I can say is that I will be with the group who resist such a thing:

I accept Pope Francis warts and all and I am committed to the successor of St. Peter in good times and bad. The divorce mentality in the Body of Christ is deplorable and a part of godless secular ideology! This Pope fits into the scheme of Gos's plan of salvation history.

While Pope Francis' actions and words may be upsetting and confusing to many, has he actually done anything heretical or evil?

"While Pope Francis' actions and words may be upsetting and confusing to many, has he actually done anything heretical or evil?"

Well he said the Blessed Mother felt betrayed at the foot of the Cross. Which of course is in conflict with the de fide doctrine of the Immaculate Conception. He bowed low and accepted the "blessing" of the Archbishop of Canterbury, who is a lay person. Is Francis trying to imply that the Church's de fise teaching on the invalidity of Anglican orders is wrong? He doesn't feel compelled to preach Christ crucified to the Jews and the Muslims. And did not Chriat say to preach the gospel to everyone? He doesn't believe that protestants converting to the one true Faith eatablished by Christ Himself is necessary, in fact he told protesants to remain as they are. And now we are on the cusp of him trying to rationalize sacrilege. He has given more than 5 interviews with that atheist reporter which caused world wide scandal. He knows that and keeps doing it. For a Pope to intentially cause scandal is indeed evil.

Anonymous 8.15 am, there are many things Pope Francis has said that concern me too. I saw a post/video of Louie Verrachio on what Pope Francis says on dialogue. I usually dismiss Louie Verrachio because of his attacks against St John Paul the Great, but in this instance his video, which is a bit of a spoof, resonated somewhat and I think this idea of dialogue and bowing down to Protestant sects is wrong. It is for this reason that the Church in Holland is virtually closing down. If we don't believe that Christ instituted the one, holy, Catholic and apostolic Church, and not "many churches" then why wait? We may as well shut up shop as well.

There's a really strange thing going on with the Pope and his writings or speeches.

On the surface there's the IMMEDIATE spin of all the world's secular media outlets and the Left-wing Catholic world to brand Pope Francis as "one of them" and thus using that as the interpretive framework to understand his every word.

Then there's the conservative world that BELIEVES THIS and so, with that as the interpretive framework, reads INTO everything Pope Francis says things which the text alone cannot sustain.

If you run the mental exercise to assume he's actually a conservative and not a liberal, the same texts used produce vastly different conclusions.

Look, we know there's a gay lobby in the Vatican, that perhaps 50% or more of bishops and priests are liberal/leftwing/progressive in their politics (i.e. socialism) and stray into moral laxity (go with the secular flow).

So we'll naturally have their influence in the Papal court and spin and arrangement of iconic photo ops and situations where they can arrange to have someone introduced to the Pope and then declare "see, he loves trannies".

Of course any pastor loves people presented to him. But that doesn't mean he approves of EVERYTHING they do or believe in. But that's the spin and both 'sides' take it at face value.

I don't think it's that simple.

There's something going on that is not so superficial, so "what you see is what you get".

I have had a distinct feeling of being played by the usual suspects with regard to Pope Francis and Catholicism in general...and the more my conservative/traditionalist friends panic, the less sure I am that their fears are really grounded in reality vs. the propaganda.

The Pope preaches mercy. Liberals take this and declare "see, there's no such thing as sin! we can keep on keeping on! Victory, Yipee!" To which Conservatives react in horror "those darn liberals! This Pope must be wrong..." without ever wondering whether the ones wrong are the liberals and wishful thinking.

There are times when the word choice of Pope Francis could use a bit of "improvement" (that's putting it nicely)....yet at the same time there have been mistranslations of some of his words.

Even giving him the benefit of the doubt (I always read his words in Spanish), sometimes even that doesn't fix things.

Let us pray for Pope Francis, he needs them.

Anonymous:
On the diocesan website, in a news release, it is noted that a Catholic vigil Mass will be offered starting next month in the Savannah suburb of Pooler, at St. Patrick's Episcopal Church. "In a letter to Episcopal Bishop Scott A. Benhase (Episcopal Diocese of Georgia), Bishop Hartmayer expressed his gratitude for the Episcopal Bishop's offer of the use of St. Patrick's for the Catholic Vigil Mass." Notice the end of the news release does not say, "in a letter to Mr. Benhase" or "layman" Benhase.

Strange. Kind of like "The Wreck of the Titan" a 1898 novella written by Morgan Robertson. In it the ocean liner Titan, sinks in the North Atlantic after striking an iceberg. Written 14 years before the Titanic.