AS UGLY AS THIS CHURCH IS, THE TRADITIONAL ATLAR ARRANGEMENT WITH MASS CELEBRATED AD ORIENTEM MAKES UP FOR IT!

This happens to be the  Traditional Mass in Sub-Saharan Africa. The Church glows with this style of Mass and altar arrangement. Could you image how it would look without this arrangement and Mass facing the people? Shutter to think! 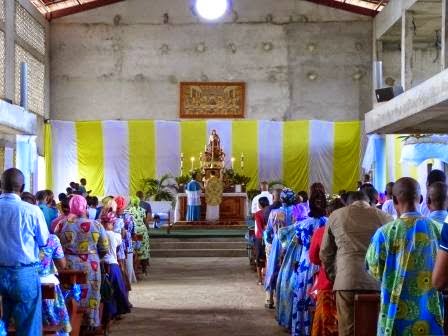 One who grows up with the Mass in Latin gains a comfortable familiarity with its language, even though not his mother tongue. As did I, even coming to the Mass as a young adult with no prior knowledge of a word of Latin. Very soon, I knew the principal prayers of the Mass in Latin, as a result of following them in my Latin-English hand missal. I recall an early trip to Rome and the immense joy my first day there, feeling right at home at Mass in St. Mary Major because it was in familiar Latin (having run a gauntlet of vulgar Italian on the way there), and later of chanting the Credo in Latin along with other foreign pilgrims at a papal audience in St. Peter’s. But, alas, the Latin uniting Catholics at Mass throughout the world in language familiar to all is now only a fading memory.

Because of the large number of indigenous languages spoken in Africa, into few of which the Roman Missal has yet been translated, many Africans still have never had access to the Mass in a language they understand. So as a result of the vernacularization of the Mass, ironically intended by Vatican II specifically for mission territories, several generations in some areas of Africa have been deprived throughout their lives of the comfort and solace of Holy Mass in a language they have any familiarity with, as they would have enjoyed if the Mass had remained in Latin.

Maybe the church is "ugly" because, in sub-Saharan Africa, there's no money for marble and plaster, delicate gold filigree and polychrome statues of saints.

Maybe they use their available funds for what they need to survive.

I have to agree with Anonymous. You have take into account the resources which are available to the people in wherever the parish happens to be located.I have seen a picture of a Mass being celebrated in some part of Africa in a church which was a tin roof covered outdoor pavilion type structure. On the other hand, there are churches in Africa which would compare to any in the U.S.

Anonymous, This is the Institute of Christ the King's Church in Libreville, Gabon. It's ugly because it's incomplete. The outside is a true work of art.

Of course now that we look at the photo we can tell this isn't complete and has potential to be beautiful. But apart from that, the altar itself in the traditional format with the priest celebrating ad orientem adds beauty to an ugly church and makes the altar the be all and end all of the beauty of it and the fact the church is full of people celebrating an EF Mass in Africa!
I wrote this before, but I had a mother attend one of our EF High Masses not too long ago and her two young daughters, one in pre-kindergarten and the other in second grade were totally consumed and attracted by the EF Mass. And as I recall, when I was their age so was I!

Thanks be to God they have a priest.

It is the spirituality of the people that matters, and not the building. I am sure that the Parishioners are filled with the holy Spirit and very happy with their environment knowing that Christ is among them. It is not about the building, but the Faith that the people have in their God. The African Traditional Mass is very exciting and uplifting as everyone participates effectively. I am sure by the Mercy of God and in His own timing, the Church will be beautified.