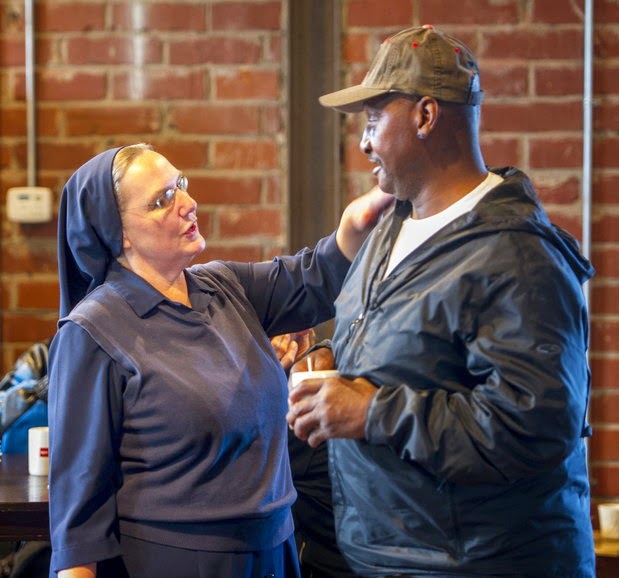 Long before Pope Francis was calling for Catholics to be concerned about the periphery, and long before yours truly became pastor of St. Joseph Church in Macon, the Catholic community in Macon has gone to the peripheries to assist the poor.

Family Advancement Ministries, a deanery/diocesan ministry began as SERVE and now assist parents with young children especially with educational programs to keep their heads above water but also with material help.

Our St. Vincent de Paul Society acts as this society traditionally functions in parishes and cares for the needs of the poor by home visitation and an evaluation of what it can do to assist.

Daybreak is a DePaul USA ministry staffed by Sister Elizabeth Grim, DC and other DC sisters and lay staff. The Catholic Church in Macon plays a large role in this day shelter for the homeless that provides them with countless services.

The above video is produced by the Macon Telegraph who two years ago name Sister Elizabeth, Macon's Woman of the Year.This is the article that will appear in the Telegraphy tomorrow already on-line today and written by our parishioner Liz Fabian:


lfabian@macon.com The success of Macon’s Daybreak center for the homeless has spread to Little Rock, Arkansas, but will mean the departure of Sister Elizabeth Greim.April 1, 2015

The Catholic Daughter of Charity announced her plans to move shortly after 8:30 a.m. Wednesday while folks were eating breakfast at the center on Walnut Street.
“Don’t do it,” one person yelled out.

As Greim asked for prayers in her new misson, another person said: “We’ll pray for you, but Daybreak is going to be messed up, sure enough.”

“No, Daybreak is going to be fine, because Daybreak is all of you,” Greim reassured them. It’s not just about one person, it’s about all of us together and that’s what we bring to Little Rock.”
Greim likely will be leaving Macon in July after a period of traveling every two weeks between the two cities as executive director of both centers.

“This was a nice deal for me,” said Greim, who plans to keep ties she developed in Macon. “I won’t live there, but will still have the connection to the work because we designed it.”
Greim could have been sent farther away to assist in a different ministry that would not have facilitated trips back to Macon, she said.

Still the news hit hard for some of the men and women whose lives she changed.

“She has brought love and nurturing and kindness and gentleness and a fierce spirit about her that brings us all together and brings this place together, in which we call Daybreak,” Scotty Nelson said.

“It doesn’t sound like a lot, but we helped facilitate a very long process,” Greim said.
Looking around at the renovated warehouse near the entrance to Central City Park, it is hard for her to remember sweeping the dusty floors a little more than three years ago.

The homeless now have access to showers, laundry, telephones and medical care in the building.
Greim, The Telegraph’s 2013 Person of the Year, spent the past decade championing the poor, disadvantaged and exploited.

She ran Family Advancement Ministries, helped organize the ecumenical “Bless These Hands” to boost the lives of women across the world, led an effort against sex trafficking that became Middle

The city of Little Rock had been operating a day center for homeless since 2013, but relinquished control Monday to DePaul U.S.A., the same Catholic service organization that oversees Macon’s center.

Little Rock Mayor Mark Stodola traveled to Macon more than a year ago and spent an hour talking to clients at Daybreak.

Greim has been traveling to Little Rock to help with the transition, but only found out last week she would be moving.

“People in Macon need to understand she’ll still be connected to Macon,” said Kay Gerhardt, of Macon, who is the chairperson of the DePaul U.S.A. board.

“She’s touched so many people in so many ways and she just has a manner about her that she draws people in.”

Gerhardt is particular impressed by Greim’s ability to bring people together from all walks of life - something Greim will help foster in Little Rock.

“She just has this magic about her,” Gerhardt said.
Clients Thomas Brewer and Joshua Pike feel like they are losing a member of the family.

“She’s kept me out of trouble. Helped me find places to live and get food and clothes and she is a very loving person,” Brewer said.

“She’s a mom to all of us who come to Daybreak,” Brewer said.

Aren't we going to make fun of her outfit? No? OK.
But serious, people like Sister Elizabeth who roll up their sleeves to feed and house and care for the least among us truly live their faith. We need about a million more like her.

Why would we make fun of her outfit. She has consistently represented herself as a simple and modest nun. She is always ready and able to get to work and always shows the joy that Pope Francis calls for. Her sisters on the other hand sometimes resemble the old maids of Pope Francis.
A million might be nice, but she is one of a kind