THE EXTRAORDINARY AMONGST THE ORDINARY 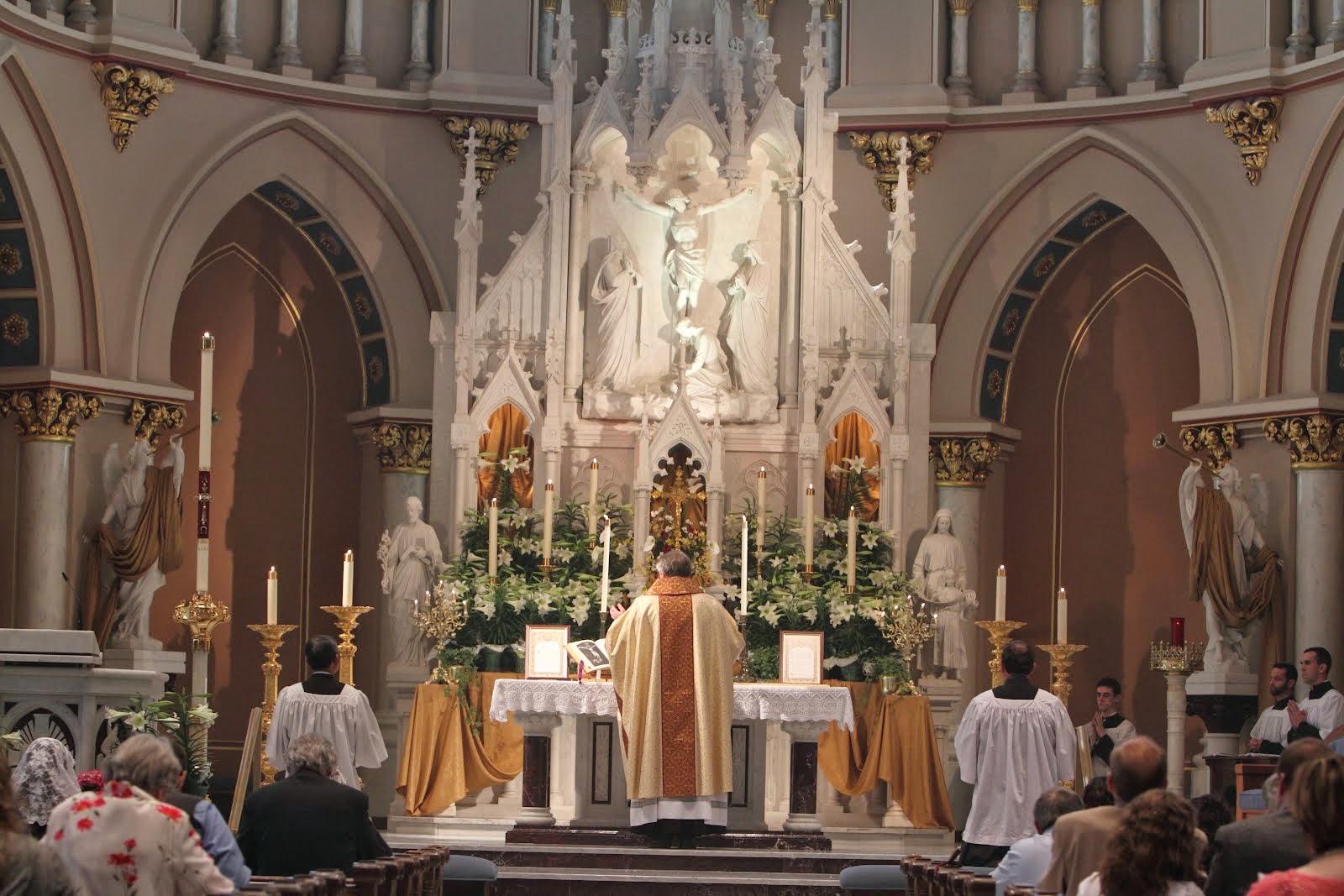 All our Easter Triduum Liturgies were of the Ordinary Form but splendidly celebrated. The Propers were chanted in English and all was celebrated in a majestic, formal way. The black was said or sung and the red was followed and to the letter of the law to include its spirit.

Easter Sunday we had five Solemn Mass, all of these sung. One out of the five was Extraordinary. It was sung as well, not the Solemn High version, with deacons and subdeacons, but a simple High Mass.

Let me comment on the beauty of our High Mass in the Extraordinary Form at 1:00 PM on Easter Sunday.

1. The congregation sang "Jesus Christ is Risen Today" in English as the procession came down the center aisle from the entrance of the church.

2. At the Foot of the altar and wearing a golden cope, I waited for the hymn to conclude and began the chanted "Vidi Aquam" as the schola continued it and I sprinkled the altar, ministers and congregation. I concluded the Vidi in chant and then changed from cope to chasuble (oddly enough, as I type this, it is only now and quite embarrassingly, that I realize that I completely forgot the maniple! I did not wear it at all and only now realize it! If anyone attended this Mass reading this, noted that I omitted the maniple, please let me know by a comment. I must admit I find the maniple to be a bit of a nuance and can understand why it was eliminated so quickly after Vatican II!).

3. Then vested in chasuble, I returned to the Foot of the Altar for the PATFOTA said quietly as the schola chanted the introit and in a most lovely Gregorian chanted setting, one of my favorite settings.

4. Then I ascended the altar to kiss and incense it. The choir began the Kyrie (Jubilatio) as I read the introit and returned to the center of the altar for the choir and congregation to complete the Kyrie. Then I intoned the Jubilatio "Gloria" which everyone sung with gusto!

6. After my stunning extraordinary form homily, we chanted the Credo III in Latin of course after I intoned it.

7. The Mass continued with the offertory and the schola chanting its Proper and then singing an appropriate anthem as I completed the offertory, incensed the offerings, altar and paschal candle (not sure if one does this in the EF Mass, I simply turned toward it at the ambo to incense it (our ambo is on the Gospel side of the altar), if anyone knows let me know if one incenses the Paschal Candle during an EF High Mass and if so where does the priest stand?).

8. I chanted the Preface flawlessly and as I began the quiet praying of the Roman Canon after my recitation of the Sanctus while the choir and congregation chanted the "Orbis Factor" Sanctus which covered the Roman Canon until I got to the Easter "Hanc Igitur." Then as all fell quiet, the bells rang out as I outstretched  hands over offerings.

9. Following the Canon, I chanted the first part of the Pater Noster and again absolutely flawlessly and the schola and congregation the final sentence.

10. As I began the Lamb of God quietly to myself, the schola and congregation chanted the Orbis Factor Agnus Dei which covered all of the quiet prayers the priest prays prior to his "Lord I am not worthy" said three times to the accompaniment of bells.

11. I'd say we had about 150 attending this Mass which was well advertized to the parish. Communion went flawlessly and quickly at our new altar railing. Our permanent deacon who helped serve this Mass in cassock and surplice, placed his deacon stole on to assist me with distributing Holy Communion. I don't know if this is kosher or not, but it is our custom at St. Joseph.

12. The choir sang a communion anthem in Latin and concluded with chanting the Communion antiphon as I did the ablutions.

13. After chanting the Prayer after Holy Communion, I turned to the congregation to chant the proper "Ite Missa Est, Alleluia" as it is meant to be sung. Since I can't have the notes in front of me as I do this, and even though I could do it from memory properly, I blanked out and some other melody entered my head and I had to just do a plain chant alleluia. Sad!

14. After I read the Last Gospel, we all departed as the Congregation sang from our English hymnal "Regina Caeli" in English.

It was a perfect celebration and many people who had never experienced the EF Mass told me afterward how reverent and inspiring the Mass was for them!
Posted by Fr. Allan J. McDonald at Monday, April 06, 2015

I have since jumped ship on the Latin Rite because of the way that it is celebrated in most places. I go to a Byzantine Rite parish with the DL of St. John Chrysostom, truly beautiful. However, if the Mass was celebrated as the norm the way that you do it FR. AJM, then would most surely come back to the Latin Rite. Being that I am only in my mid-20's, I think that there is hope that I will outlive this nonsense. What can we do...?

Example: The Filial Appeal to Pope Francis that is on the internet, that has garnered just under 170,000 signatures for the defense of the family at the upcoming synod.

Solution: Possibly start a Filial Appeal to the Pope or to Cardinal Sarah to end liturgical abuse, make the Mass more Christ centered. It isn't fair that the Ordinariate has a more reverent Mass than we do.

We know that blogs get the attention of Rome. Just look at the reaction to the Synod. We need to use technology to our advantage.

I'm no expert (and I'll undoubtedly be corrected, if necessary, by the more learned people here), but isn't the maniple a symbol of the "sweat and tears" of sacrifice? It doesn't seem like a nuance to me, but rather, an indication of the awesome task the priest is called to fulfill, and the humility and reliance upon God with which he must approach said task.

The maniple, whatever its acquired symbolism, is something a priest gets used to over time. Offering Mass with it on every day, or even just every week, eventually turns it into something that you don't even notice except when it is absent (such as during the asperges or an EF baptism).

I have never seen the Paschal Candle incensed at an EF Mass but sometimes OF habits die hard. One priest started to sing the blessing and was stopped by the MC and ordered to say it (I think the MC should have let him continue and had a word with him afterwards).

I have seen the EF Mass celebrated without a maniple for the simple reason that none was available; I have also seen priests forget to remove it before preaching the sermon. The sacristan should have laid it out with the chasuble. Its lack would be scarcely noticed under a Gothic chasuble. Obsessing over maniples should be left to PI and his ilk.

It is not unusual for a priest or deacon to act as a server (strictly speaking an MC should be a cleric). If he assists in distributing Communion (and deacons may do this in the Old Rite) he puts on a stole over his choir dress. In a Missa Cantata such as the one you celebrated he may also sing the epistle, usually facing the altar (although I believe he can face the people) and the priest doesn't have to read it from the altar missal. To do this he again assumes the stole.

When a priest assists in distributing Communion he also wears his stole over cassock and cotta.

I certainly have no idea whether the Easter Candle is incensed at the EF Mass on Easter, but I know the priests at St. John Cansius in Chicago would know! For sure. And they could answer any of your other random questions too. I mentioned their web site on another comment.

And Fr. McD, that you flawlessly intoned all the parts in Latin must have been a gift of the Holy Spirit! (I expect you were being a little tongue in cheek here, and so am I.) Given that most of us have absolutely no idea what should be going on or how it should sound, I'm sure no one noticed if didn't go perfectly.

I sure would have liked to hear your homily though. I'm sure it was worth hearing.

He is truly Risen. Alleluia!

The Missa Cantata is harder on the celebrant than is the Solemn Mass since he has to chant the epistle and gospel himself. In the old days he would have learnt to do this in seminary as a subdeacon and deacon but nowadays he has to learn from scratch. The Novus Ordo rubrics (such as they are) can be learnt in an afternoon, but the prescriptive rubrics of the Vetus Ordo are a different matter, especially if the priest does not celebrate it on a daily basis.

All credit, then, to priests like Fr McDonald who have taken the time and trouble to learn the older Rite. Often this is their own choice rather than a response to a request. They need the support of the laity. A hundred and fifty people at an occasional afternoon Mass is extremely encouraging.

Is it liturgically correct to use the maniple with he cope? What of the use of the maniple in the OF?

The maniple is only worn with the chasuble and should be removed before the sermon, which interrupts the action of the Mass. In non-solemn Masses it is placed on the Missal. Sometimes at a Missa Cantata I have seen the celebrant remove the maniple and hand it to the MC if anything follows the Last Gospel, e.g. the Domine salvam fac or a Marian hymn. I have never seen a priest remove it for the Leonine prayers after low Mass.

It was made optional in 1967 and even the Oratorians do not use it in the OF although there is nothing to stop one doing so (although presumably it would be retained for the homily which is deemed - incorrectly in my opinion - to be part of the liturgy in the Novus Ordo).