POPE DOES NOT CALL LCWR PICKLED PEPPERS, BUT HE DOES SEEM TO HAVE GOTTEN WHAT THE VATICAN WANTED--L'OSSERVATORE ROMANO 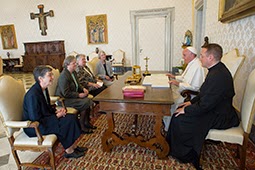 This article from L'Osservatore Romano reads like something from the communist era of Pravda! To read it, it seems like everything is coming up roses with the LCWR and the Vatican. But then you read it closer and it is clear that that Vatican got everything it desired and the LCWR is treated in a face-saving way for American PR purposes.

Please not what I highlight in red. This doesn't sound like to me that the LCWR won! Does it seem like it to you?

A meeting with Pope Francis marked the end of difficult course of reconsideration of the role that the Leadership Conference of Women Religious plays in the Church. The president of this conference of religious superiors in the United States has been seen as a protagonist in recent years.

At the Vatican on Thursday, 16 April, the Pontiff received in audience a delegation of the Leadership Conference of Women Religious (lcwr), who were at the Vatican for a meeting with the Congregation for the Doctrine of the Faith. At that meeting along with the sisters was Archbishop James Peter Sartain of Seattle who had been appointed by the Holy See to oversee the mandated doctrinal assessment and overhaul of the organization of nuns. All participants emphasized that the sensitive process unfolded in an atmosphere of great cooperation which bore important and lasting fruit.

“At the conclusion of this process”, Cardinal Prefect Gerhard Müller noted, “the Congregation is confident that lcwr has made clear its mission to support its member Institutes by fostering a vision of religious life that is centered on the Person of Jesus Christ and is rooted in the Tradition of the Church. It is this vision that makes religious women and men radical witnesses to the Gospel”.

Sr. Sharon Holland, ihm, President of lcwr, was unable to be present for the meeting but commented: “We are pleased at the completion of the Mandate, which involved long and challenging exchanges of our understandings of and perspectives on critical matters of Religious Life and its practice. Through these exchanges, conducted always in a spirit of prayer and mutual respect, we were brought to deeper understandings of one another’s experiences, roles, responsibilities, and hopes for the Church and the people it serves”. “We learned”, she concluded, “that what we hold in common is much greater than any of our differences”.

All of this is also confirmed in the joint final report presented, at the conclusion of a three-year process, by the U.S. bishop delegates and lcwr representatives (also present at the meeting were Sr Marcia Allen, Sr Janet Mock, Sr Joan Marie Steadman and Sr Carol Zinn). The document also acknowledges that the commitment of the Conference’s leadership “will continue to guide and strengthen lcwr’s witness to the great vocation of Religious Life, to its sure foundation in Christ, and to ecclesial communion.’

The joint declaration also illustrates the revision of the statutes, to better define the role of the Conference, which, “centered on Jesus Christ and faithful to the teachings of the Church”, is “to develop the life and mission of women religious in responding to the Gospel in the contemporary world”. The revised Statutes were approved on February 6, 2015 by Decree of the Congregation for Institutes of Consecrated Life and Societies of Apostolic Life. Contextually, the declaration also gives an account of the survey conducted on publications, seminars and conferences of the lswr, “to ensure that the Conference’s mission would be fulfilled in accord with Church teaching”. The document indicates that considering the large demand in U.S. religious communities for published materials in the field of spiritual growth, measures have been taken “that will ensure theological accuracy and help avoid statements that are ambiguous with regard to Church doctrine or could be read as contrary to it”.

The declaration additionally describes that over the course of “the past three years, considerable time and attention were given to dialogue regarding other matters raised by the Mandate, including the importance of the celebration of the Eucharist; the place of the Liturgy of the Hours in religious communities; the centrality of a communal process of contemplative prayer practiced at lcwr Assemblies and other gatherings; the relationship between lcwr and other organizations; and the essential understanding of lcwr as an instrument of ecclesial communion”.

Great satisfaction was expressed for the atmosphere of great cooperation throughout the three-year process, which was “marked by a spirit of prayer, love for the Church, mutual respect, and cooperation”. The same concepts were also emphasized by Archbishop Sartain, who thanked the officials of the Congregation for the Doctrine of the Faith, calling their assistance “essential to the great progress we made”, and underscoring that the “substantive dialogue between bishops and religious women has been mutually beneficial and a blessing from the Lord”.
Posted by Fr. Allan J. McDonald at Monday, April 20, 2015

Father, it is going to be an interesting ride with this...
I "grew up" with the IHMs up nawth. Mind-boggling is the only description that comes to mind when describing the differences between then (Scranton PA, 1965) and now.

Now let us all have a big group hug.

Ha! This isn't over.

Does the LCWR state abortion is an intrinsic evil? Are their "feelings" in line with Magesterium teaching?

This is a play for power fueled by envy and pride. The LCWR desire something they cannot have.

From reading MANY of the comments here about the LCWR, it seems that many commenters try to soothe their ire and resentment with the hope...belief...that in a few years all of these VII, LCWR nuns will be dead. They will be replaced by holy, docile, obedient, new generation, habited, yes father, no father, whatever you say father young women who know their place. It ain't gonna happen. What you people have a problem with (though you're not likely to fess up) is not "Nones" or Nuns....but WOMEN....strong, opinionated, take-charge women who are demanding their place at the table...in the Church...in the world. Whether they are Nuns or not...the women are coming (just as the black and brown people are coming). Get over it....get used to it.

You seem to belittle the Catholic faith and fidelity of Catholic woman. But actually you confirm that post-Catholics, male or female are unfaithful and see the Church as a mere sociological, horizontal institution for self actualization as though in politics and the work place.

Anonymous doesn't seem to get something: These rough women are not going to be replaced in 20 years by nuns that he (or she?) despises for being meek and docile. THEY ARE ALREADY OUT THERE. THOSE are the orders that are growing. They are the ONLY orders that are growing. Sister Harpy and the gang are on self-destruct and it's only a matter of time.

Modernism isn't just self-destructive and non-fruit-bearing. It's also BORING. No young woman with any brains or imagination wants to go back to the 70's with the pant-suited, authority-hating, uhmm…"ladies" that run this LCWR. THAT'S what ain't gonna happen.

One more thing: Any moron can shout loudly, march in protest and make a big display of themselves for whatever they deem to be "social justice". It takes a great deal of inner strength to practice silence, obedience, docility and meekness and submit to rightful authority. And ALL Catholics are called to do so--men AND women.

Anonymous
"What you people have a problem with (though you're not likely to fess up) is not "Nones" or Nuns....but WOMEN....strong, opinionated, take-charge women"

You mean like St Teresa of Avila or Catherine of Siena (just to name two)? No problem for me. Catholic women religious were starting religious orders and building and running schools, orphanages and hospitals long before there was a LCWR. The difference is that they were faithful to Church teaching.

I don't think the anonymous comment at 7:26 was meant to be taken seriously. It is too obvious a caricature of a certain viewpoint. For some reason irony only seems to work on the net if it is heavy-handed.

It helps, of course, if the commentator identifies himself (or herself) in some way. Then one can more easily ascertain whether or not it is a wind-up.

What's up Fr. AJM. I was wondering if you could do a post about what you think the Church will be like in 20 years here in the U.S. You've been a priest for some time and I'm sure you see trends. I would really like to know your insight on things like