AN UNUSAL OBITUARY FOR REV. ROBERT A. SCHULLER

Rev. Robert Schuller will be buried from his former Crystal Cathedral on Sunday. Today it is the Roman Catholic Cathedral of Orange County, California. I'm not sure how the funeral will take place in there as it is being reconfigured for the Catholic Mass and other Catholic liturgies. It is far from complete. So I hope the service for Schuller will be televised or on video.

The obituary below is an obituary, but actually a news story. It is very sad: 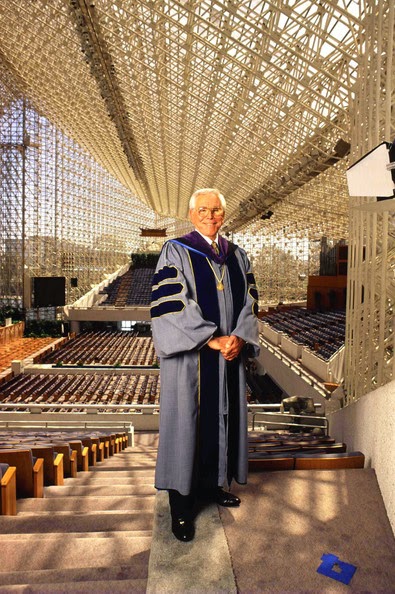 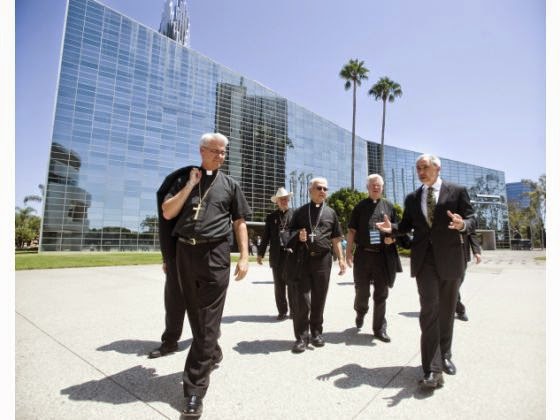 GARDEN GROVE, California (AP) — A public memorial will be held for the late televangelist the Rev. Robert H. Schuller in a plaza outside the glass-paned Crystal Cathedral he built in Orange County.

Daughter Carol Schuller Milner said Sunday the service will be held on Monday, April 20 on the campus of Christ Cathedral in Garden Grove.

After the memorial, Schuller will be buried beside his wife in a private service at the campus cemetery.

Schuller died Thursday. The 88-year-old started preaching in 1955 at a rented drive-in theater. He began a television ministry in 1970 called the "Hour of Power" and later built the cathedral to house his booming ministry.

In recent years, the church was hit by falling membership and filed for bankruptcy in 2010. The Roman Catholic Church bought the cathedral.

ARTESIA, Calif. (AP) - The Rev. Robert H. Schuller didn't wait for the faithful to flock to his upstart church in Southern California - he took his message to them.

As the car culture flourished in post-World War II California, the brash Iowa-born pastor began preaching from the roof of a concession stand at a drive-in movie theater, displaying a passion - and a marketing genius - that established him as a father of the megachurch movement that would soon sweep the nation.

But Schuller didn't stop there. In 1970, he reached out to the masses beyond his home base in the Los Angeles suburbs with his "Hour of Power" television program, which was broadcast into millions of homes every Sunday over the next two decades. He also constructed the soaring, glass-paned Crystal Cathedral that became the touchstone of his storied ministry.

The world-famous televangelist and author memorialized in decades of recorded sermons and books died early Thursday at a care facility in Artesia, daughter Carol Schuller Milner said. He was 88.

Schuller was diagnosed in 2013 with terminal esophageal cancer.

A charismatic presence on the televangelist circuit, Schuller faded from view over the past decade after watching his church collapse amid a disastrous leadership transition and sharp declines in viewership that ultimately bankrupted the ministry.

The landmark Crystal Cathedral was sold to the Roman Catholic Diocese of Orange in 2011 and Schuller lost a legal battle the following year to collect more than $5 million from his former ministry for claims of copyright infringement and breach of contract.

Schuller, who preached in a flowing purple robe and outsized aviator glasses, suffered a mild heart attack in 1997, but was quickly back on the pulpit, saying "the positive person" is not afraid of life's surprises.

Schuller's evangelical Protestant ministry, part of the Reformed Church in America, was a product of modern technology.

He and his late wife, Arvella, started the ministry in 1955 with $500 at the drive-in theater. The church's motto - "Come as you are in the family car" - tapped into the burgeoning Southern California auto culture and the suburban boom of postwar America.

"Jesus went to the people. He didn't sit around in his temple and wait for them to come to him," said Bobby Schuller, Schuller's grandson, who took over the "Hour of Power" show. "The drive-in ministry was his way of doing that."

By 1961, the church had a brick-and-mortar home, and Schuller began broadcasting the "Hour of Power" in 1970.

In 1980, he built the glass-and-steel Crystal Cathedral to house his booming TV ministry, which was broadcast live each week from the 2,800-seat sanctuary. At its peak in the 1990s, the program had 20 million viewers in about 180 countries.

Schuller's message - that "Possibility Thinking" and love of God overcome hardships - was a uniquely American blend of Bible and psychology. It was inspired by late author Norman Vincent Peale, who wrote "The Power of Positive Thinking." Schuller also wrote more than 30 books, including several best-sellers.

Unlike other televangelists, the senior Schuller's message lacked fire-and-brimstone condemnations or conservative political baggage. Fundamentalists attacked him for statements they believed denied the need for personal repentance of sin.

His friendship with President Bill Clinton raised some eyebrows among the conservative Republicans in his congregation and prompted a deluge of irate letters and telephone calls.

In the start of a carefully choreographed leadership transition, Schuller's only son, 51-year-old Robert A. Schuller, was installed as senior pastor in 2006. Although a father-son succession is rare in the Reformed Church in America, the Schullers considered the church a "family business" and the move was sanctioned by the national church, officials said.

The younger Schuller left amid a bitter family feud in 2008. His father had removed him from the "Hour of Power" broadcasts and he quit as senior pastor a few weeks later.

Sheila Schuller Coleman, one of Schuller's daughters, took over as the church's top administrator, and preachers, including her and her father, handled the "Hour of Power." She, too, ultimately left.

The tumult in the pulpit worsened a pre-existing decline in viewership and donations and in 2010, Crystal Cathedral ministries filed for bankruptcy, citing debt of more than $43 million.

Bankruptcy filings indicated the ministry was paying significant tax-exempt housing allowances to Schuller family members and insiders. They were legal but raised concerns among creditors who had gone unpaid for months.

In 2012, Schuller and his wife quit the board of directors in a dispute over copyright infringement and breach of contract. That year, they lost a legal bid to recover more than $5 million from the ministry.

Robert Harold Schuller was born in Alton, Iowa, in 1926 and was ordained by the Reformed Church in America in 1950. He was pastor in Chicago from 1950 to 1955 before moving to California.

Besides his son, Schuller and his wife had four daughters: Sheila, Jeanne, Carol and Gretchen. Wife Arvella Schuller, a longtime ministry partner and organist, died Feb. 11, 2014, after a brief illness.

I think the bishop jauntily carrying his jacket over his shoulder is Archbishop Paul S. Coakley of Oklahoma City. He was 2 years ahead of me in the seminary. A fine man, indeed. Bishop at 49, Archbishop at 55... What's next?