HAS POPE FRANCIS' AMBIGUITY COME BACK TO BITE HIM OR IS THIS AMBIGUITY SOMETHING THE PRESS HAS CREATED AND MANIPULATED THE WORLD TO THINK THE POPE ISN'T CATHOLIC? 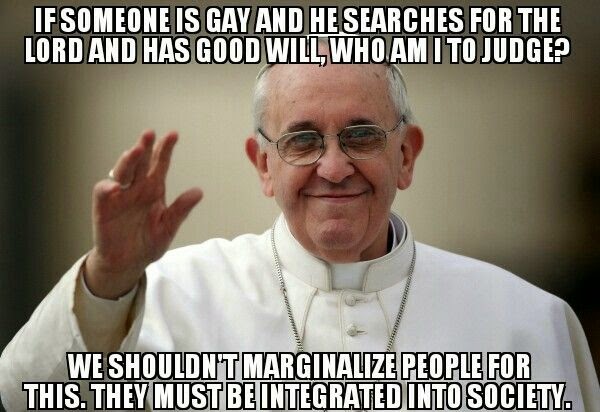 Is Pope Francis beginning to learn that his ambiguous populist speech has caused confusion where once clarity reigned supreme in the Holy See? I suspect that for a man of 77 to be thrust on the world's stage and overnight from the obscurity of South America, that the learning curve must be dramatic and a bit difficult.

But the Holy Father has opened himself to the problems he is now experiencing when it comes to his populist approach that pleases the powers of the world who hate the clarity of Catholicism as it regards human sexuality and everything that flows from it.

I just don't know how the liberal press will deal with this other than ignore it and pretend it wasn't the pope that is saying these Catholic things:

Vatican standoff with France tests the pope’s ‘Who am I to judge?’ stance


Religion News Service April 25, 2015
PARIS — Pope Francis has been hailed for his forward thinking, but — at least according to French news reports — the pontiff has put on the brakes when it comes to a gay French ambassador at the Vatican.

In January, French President Francois Hollande nominated his protocol chief Laurent Stefanini as Vatican envoy to replace outgoing ambassador Bruno Joubert. The pick seemed ideal: 55-year-old Stefanini is described as brilliant and a devout Roman Catholic who secured support for his candidacy from Cardinal André Vingt-Trois, the archbishop of Paris. He is also a known quantity at the Vatican, having served as a top official at the French embassy to the Holy See a decade ago.

But so far, his nomination has gone nowhere. Last week, France’s investigative weekly Le Canard Enchaine reported that Pope Francis met with Stefanini last weekend. The message: The pontiff did not appreciate France’s 2013 same-sex marriage law, nor being pressured into accepting Stefanini’s candidacy.

The pope supposedly told Stefanini that France’s legalization of same-sex marriage in meant he could not allow him to serve at the Vatican. Reuters speculated that the pope worried that Stefanini could decide to marry while at the Vatican.

The pope’s reaction, as reported in the media, appears to contrast starkly with his remarks two years ago in which he said, “If a person is gay and seeks God and has good will, who am I to judge?”

Another French media report said that the unusual meeting between Stefanini and Francis — a pope rarely gets directly involved in the appointment of an ambassador — was friendly and lasted 40 minutes, and ended with the two men praying together.

The French government has said little about the matter, except to confirm the meeting between the pope and the Vatican nominee took place.

“Nothing has changed,” government spokesman Stephane Le Foll told reporters. “France has proposed a candidate, and for the time being, we are waiting for the Vatican’s reply, after the usual discussions and review of his candidacy.”

“The Vatican seems badly placed to refuse homosexuals,” Kouchner told RTL Radio this week, adding, “but apart from that, I adore Pope Francis.”

My final comment: It seems that the world (in the sense that John's Gospel uses the term) loves Pope Francis when they perceive His Holiness not to be Catholic!

The Pope's quote was in the context of a priest who quit sexual sin and repented in confession and was now sincerely seeking God.

In that context alone - post-confessional, post-forgiveness, current purity of heart and intention.... we cannot judge a person's future behavior.

It was not a blanket endorsement of all things gay or a declaration that the active gay lifestyle is perfectly fine for Catholics.

Because if that WAS what Pope Francis meant then you can't compartmentalize it for just gays. The polluter, the abuser, the criminal, the mafioso...

the abortionist and political promoter of abortion. But also the racist, sexist, bigot, homophobe - anyone and every class of sinner who could declare "it's no longer a sin so long as I FEEL good about myself!" yippee!

Mercy = no sin? No, that turns mercy on its head. Mercy starts when you acknowledge you don't deserve something, not by declaring your righteousness.

He is certainly known for valuing friendship over clarity, as this episode exemplifies. The question remains, is this the best approach for opening non-believers to the process of repentance, conversion and salvation? If we begin a conversation with calls for repentance, will the conversation make any progress? If we begin instead by discussing God's mercy, how far will the conversation go? Our goal must always be the salvation of souls, whatever the strategy.

It would be one thing if he was using an outreach to lost sheep by trying to coax them back into the flock. However why has he found it necessary to kick the sheep in the flock and discipline decent shepherds? If it wasn't for the second part of his behavior I might accept his ambiguity as a reasonable plan. Don't forget that there has been Pope Francis the Merciful and Pope Francis the Accuser. In order to arrive at a good end the two popes can't coexist.

This may be similar to Pope Francis' lUdable policy of not giving communion to public figures. In this case however, as JBS and Jusad allude to, he could use this as a very public teaching point. The diplomat will have discussions and be forced to compare the policies of his country and his Church and eventually reconcile and chose. This is the perfect opportunity for Francis as a teacher and "street preacher" to also enlist the intellect of Benedict to frame the argument. Public battle for a man's soul. Pray to Archangel Michael and get it on.

Convey to them the whole Truth. When all is said and done Christ's Church is not of this earth, no matter how "earthly" some people may make it appear.

Don't lie to them or they will never trust you.

Isn't it funny that the media reports this as Pope Francis' (and the Catholic Church's?) hypocrisy, not that they twisted and misreported what he said in the first place!!!

Ya gotta hand it to them. They sure know how to spin.