THE QUESTION WAS WHETHER OR NOT POPE FRANCIS WOULD USE THE WORD "GENOCIDE" TO DESCRIBE WHAT HAPPENED TO THE ARMENIANS IN THE EARLY PART OF THE 20TH CENTURY; HE DID AND USED MUCH MORE! 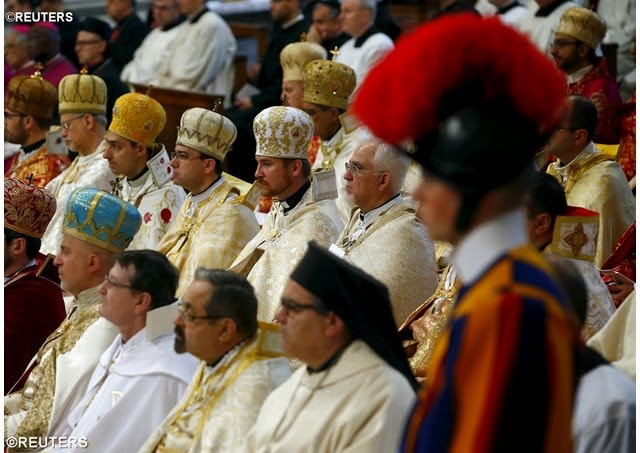 John Allen has a piece in Crux before this morning's Papal Armenian Mass pondering  dilemmas for Pope Francis:

The first comes Sunday, as Francis celebrates a Vatican Mass commemorating the 100th anniversary of what Armenians call a genocide, in which as many as 1.5 million Armenians perished at the hands of Turks, and what Turks insist on terming an unfortunate loss of life created by a civil conflict.
Inés San Martín of Crux reported this week that in the run-up to the anniversary, Francis finds himself trapped between two imperatives: Denouncing the Armenian genocide as a harbinger of today’s waves of anti-Christian persecution, while not alienating a strategically crucial nation regarded as a potential force for moderation in the Islamic world.

Vatican sources said in advance of Sunday’s Mass with a host of Armenian dignitaries that the pontiff probably wouldn’t use the “g” word, despite the fact that he’s done so before, and that both Pope John Paul II and Benedict XVI also employed it.

Francis knows what’s at stake. When he visited Turkey in late November, President Recep Erdoğan offered the pontiff a deal: You take up the fight against Islamophobia in the West, and I’ll defend Christians in the Middle East. It’s a potential game-changer, one Francis probably doesn’t want to sacrifice because of an avoidable diplomatic row.

On the other hand, Francis has become increasingly outspoken on anti-Christian persecution. He’s angrily accused the world of “trying to hide” Christian suffering, and he’s even broken with the Vatican’s typical opposition to any military intervention in the Middle East to offer carefully circumscribed support for an anti-ISIS use of force.
If Francis fails to call a spade a spade on the anniversary of the 20th century’s first mass murder of Christians, believers in the firing line today may doubt the pontiff’s resolve.

Perhaps one could argue that the truly bold thing for Francis to do is to show restraint, playing the long game with the Turks rather than indulging an emotional desire to point fingers. Holding the anniversary Mass in itself certainly puts the world on alert that he hasn’t forgotten what happened a century ago.

In any event, it will be fascinating to watch how Francis navigates the dilemma.

This is how Pope Francis navigated his dilemma this morning:


Greeting of the Holy Father
Mass for the Faithful of the Armenian Rite
12 April 2015
On a number of occasions I have spoken of our time as a time of war, a third world war which is being fought piecemeal, one in which we daily witness savage crimes, brutal massacres and senseless destruction.  Sadly, today too we hear the muffled and forgotten cry of so many of our defenseless brothers and sisters who, on account of their faith in Christ or their ethnic origin, are publicly and ruthlessly put to death – decapitated, crucified, burned alive – or forced to leave their homeland.

Today too we are experiencing a sort of genocide created by general and collective indifference, by the complicit silence of Cain, who cries out: “What does it matter to me? Am I my brother’s keeper?” (cf. Gen  4:9; Homily in Redipuglia, 13 September 2014).

In the past century our human family has lived through three massive and unprecedented tragedies.  The first, which is widely considered “the first genocide of the twentieth century” (JOHN PAUL II and KAREKIN II, Common Declaration, Etchmiadzin, 27 September 2001), struck your own Armenian people, the first Christian nation, as well as Catholic and Orthodox Syrians, Assyrians, Chaldeans and Greeks.  Bishops and priests, religious, women and men, the elderly and even defenceless children and the infirm were murdered.  The remaining two were perpetrated by Nazism and Stalinism.  And more recently there have been other mass killings, like those in Cambodia, Rwanda, Burundi and Bosnia.  It seems that humanity is incapable of putting a halt to the shedding of innocent blood.  It seems that the enthusiasm generated at the end of the Second World War has dissipated and is now disappearing.  It seems that the human family has refused to learn from its mistakes caused by the law of terror, so that today too there are those who attempt to eliminate others with the help of a few and with the complicit silence of others who simply stand by.  We have not yet learned that “war is madness”, “senseless slaughter” (cf. Homily in Redipuglia, 13 September 2014).

Dear Armenian Christians, today, with hearts filled with pain but at the same time with great hope in the risen Lord, we recall the centenary of that tragic event, that immense and senseless slaughter whose cruelty your forebears had to endure.  It is necessary, and indeed a duty, to honour their memory, for whenever memory fades, it means that evil allows wounds to fester.  Concealing or denying evil is like allowing a wound to keep bleeding without bandaging it!

I greet you with affection and I thank you for your witness.

With gratitude for his presence, I greet Mr Serž Sargsyan, the President of the Republic of Armenia.

In the firm certainty that evil never comes from God, who is infinitely good, and standing firm in faith, let us profess that cruelty may never be considered God’s work and, what is more, can find absolutely no justification in his Holy Name.  Let us continue this celebration by fixing our gaze on Jesus Christ, risen from the dead, victor over death and evil!

I am glad he has the strength to say this. I don't usually like the use of the word 'genocide' because it is so over used, or worse, misused and therefore misleading. Here, at least, it has the perfect effect on the rest of the world in the proper regional context.

My prayer is that this is a step towards reunification with the Armenian Apostolic Church back to Rome. First St. Gregory of Narek, now this. It would be amazing if one of the Orthodox would come back home.

"He’s(Pope Francis) angrily accused the world of “trying to hide” Christian suffering, and he’s even broken with the Vatican’s typical opposition to any military intervention in the Middle East to offer carefully circumscribed support for an anti-ISIS use of force."

We, as people of faith, are (or should be) the agents of God's Divine Mercy. Unfortunately, there is not the will or effort on the part of the political leadership in those countries that have the capacity to do so, to come to the aid of the Christians. The United States, which has often exercised the necessary leadership in this area, can no longer be counted on to do what needs to be done.
So we see what can transpire when faith becomes weak or is lost and people lose their relationship to God. We can only hope and pray that this changes.

George, our "leadership" in the Mideast made things far worse for Christians there. By knocking off Saddam (and he was no angel, of course), we destabilized Iraq and there's been hell to pay for minorities there ever since. The domino effect stirred up the hornets' nest of Syria and led to the rise of ISIS. Now things are much, much worse for Christians in both countries. The past decade, since the US invasion, has been a disaster for Mideast Christians. I doubt they need more "leadership" like the US has provided so far.

"And the winner of the dopey hat competition is....

The difference between Saddam Hussein's government and ISIS is ISIS wants everyone to know and watch.

The hats are part of their repressed culture. Conservatives like yourself are very fond of "victim-blaming". You see victims as objects for ridicule. I encourage you to open your heart and mind to people who are different from you and from your lived experience. The world would be a better place if people like you would allow more room for people like them.

Daniel:
Pretty much everyone including Pope Francis is aware of the recent history of the Middle East. That should not paralyze those countries with the means to do so to intervene in some way or another on behalf of the persecuted Christians. There are times when military action is justified. The Fire dept. does not refuse to extinguish a fire simply because someone else started it.

The Armenians were first disarmed.
Then they were rounded up (at gun point) and marched off into deserts.

Those who attempted to flee were shot.