[THE ORTHODOX] HAVE NO WHERE ELSE TO GO (E.G., THE SSPX SIMPLY NOT AN OPTION). [THE ORTHODOX] ACCEPT VATICAN II AND THE CATECHISM OF THE CATHOLIC CHURCH AND CODE OF CANON LAW. 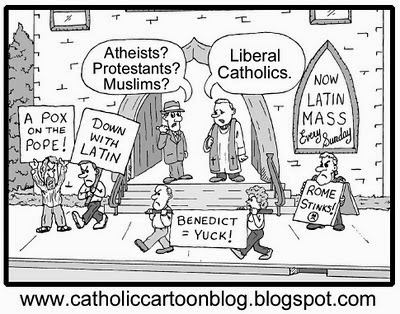 Posted on 9 April 2015 by Fr. John Zuhlsdorf
The upcoming Synod of Bishops in October is probably going to be a knock-down, drag-out over a few issues. The Germans are set on achieving a progressive agenda and have hinted at doing their own thing if the Synod doesn’t go their way. Others are set on defending the Church’s doctrine.
Some people are talking about “schism” because of the Synod.
No matter what happens at the Synod, there will be no schism by either side.
Schisms are passé. Catholics don’t schism.

Indifference and apathetic drifting are the real threats.

Conservatives have no where else to go (e.g., the SSPX simply not an option). Conservatives accept Vatican II AND the Catechism of the Catholic Church AND Code of Canon Law.

Liberals love to hear conservatives talk about “schism”, because liberals are actually the ones trying to bring it about. As they try to impose NewChurch, liberals are already in de facto schism. But they’ll never make it official. They are basically Congregationalists. They are still in the cafeteria. They take what the want and leave the rest. Schism would take too much effort and money.

Schism talk is for journalists only, for headline effect. But it’s to the liberals’ advantage.
So, I want to assures the world that there will not be a schism.

There is no real threat of schism from the right. There will be no formal schism on the left, for different reasons.

So – get over it. Stop the distraction.

I don't know if I fully agree, there's been a de facto schism with the mentality of a certain type of clergy. I certainly do not hope for a schism...perhaps it's best to put those that are enemies of the Faith in the light, so we know who they are.

Joe, I think the post says that if there is a schism it is the divergent group trying to expel or displace the orthodox. I do believe that is the case at some level, just not sure how official it is.

Ronald Reagan once said, "I didn't leave the Democratic Party, the Democratic Party left me." And so it goes for many millions of Catholics.
We didn't leave the Catholic Church, but the Catholic Church hasn't done right by us. We have sat through decades of silliness and innovation, trying to be faithful, all the while swallowing this gnawing feeling that something just is not right. Ask your pastor about "Extra Ecclesiam Nulla Sallus" and you'll be told that the Church no longer teaches it. Guess we were just wrong all those years? Ask where the tradition of Communion in the Hand started in America that prompted the bishops to push for the indult and you'll get some sidestep answer about how it functioned in the early Church. Insist that the Traditional Mass was never truly abrogated, and you'll be marginalized as a liturgical leper. Better yet, show him where Pope Benedict insisted it was never abrogated and your status as a freak will double. Question whether Francis' synod on the family has the right to change the Church's position on Communion and you'll be lambasted as "unfaithful" because you've dared to question the great "Breakthrough Pope" of liberalism.

We've been in a de facto schism for years. We're not leaving the Church because, sooner or later the Church is going to have to deal with the Truth and when it does, the Church WILL return to us. For now, we wait and pray.

Anonymous - We still believe Extra Ecclesiam Nulla Salus, but with a much better understanding of what "ecclesiam" means and who is "extra" to it.

While you were sitting there for decades, apart from the theological development and serious doctrinal evolution, the Church changed.

The Church's understanding, teaching, and application of God's unchanging revelation has always developed and changed. Whether it was on the question of usury, the manner of the "change" in bread and wine in the mass, the role of the laity, the relationship of the Church to other Christian denominations or to non-Christian religions, or a host of other things, things simply have not stayed the same.

I don't think anyone is arguing that nothing changed before the 1960s. I'm not overly enamoured of the term 'organic development' although it is explicitly mentioned in Sacrosanctum Concilium although we always used to say that the Church thinks in centuries.

The revolution of the 1960s at the end of which (as my parent's generation said) the baby was thrown out with the bathwater could perhaps be justified if the result was a 'new spring' with people flocking to the new vernacular liturgy and 'anything goes' mentality. The statistics do not bear this out.

'Aggionamento' has to looked at in context. In 1960 the Church's moral teachings were largely reflected in protestant/secular attitudes and the laws of most western countries. Now they are in stark contrast. What was the whole Vatican II thing for? You tell me.