I LIKE IT, WHAT ARCHBISHOP BLASE CUPICH HAS DONE WITH THE BISHOP'S THRONE IN CHICAGO'S CATHEDRAL

I think it is safe to assume that Chicago's Cathedral went through a horrible "wreckovation" in the 1970's which was typical for renovations at that time. I was there for the first time this summer and couldn't believe the horrible stain glass windows of the 1970's which replaced more traditional windows. The ambo is so far left of the main altar to appear almost insignificant and it is so high that when the lector read from it, you could barely see the top of her head!

The bishop's throne was dead center where the old traditional altar/reredos once once.

I hope one can tell by this picture at the visitation for Cardinal George: 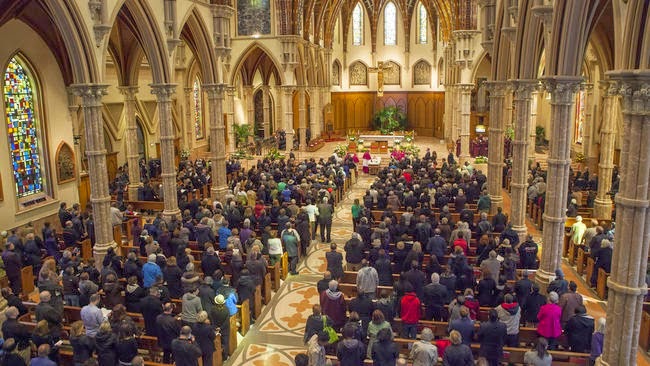 Here is how the Cathedral looked prior to Cardinal John Cody's reorientation of it after Vatican II, although this picture shows the temporary altar set up immediately following the Council for Mass facing the congregation: 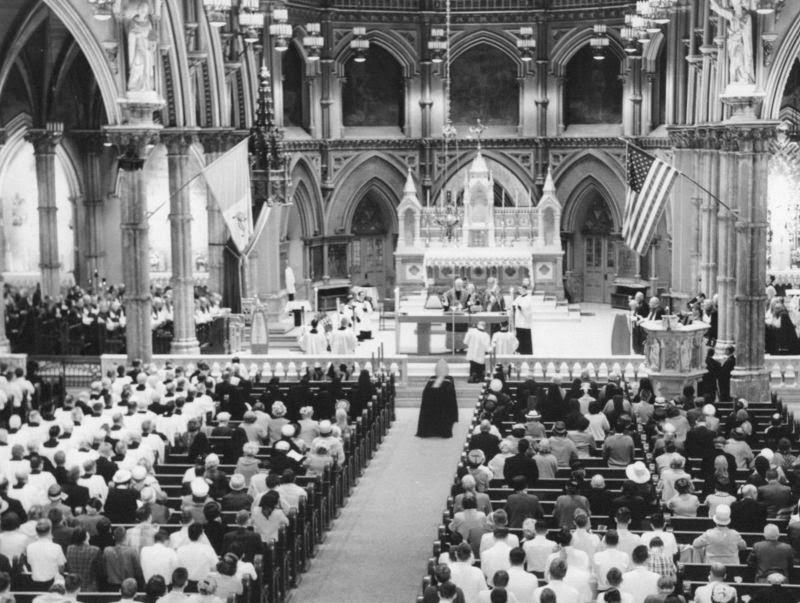 This is an even older rendering: 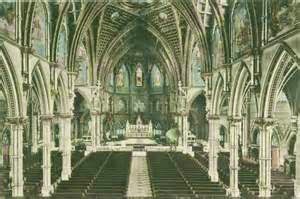 And then what I am sure was touted as post-Vatican II "new and improved": 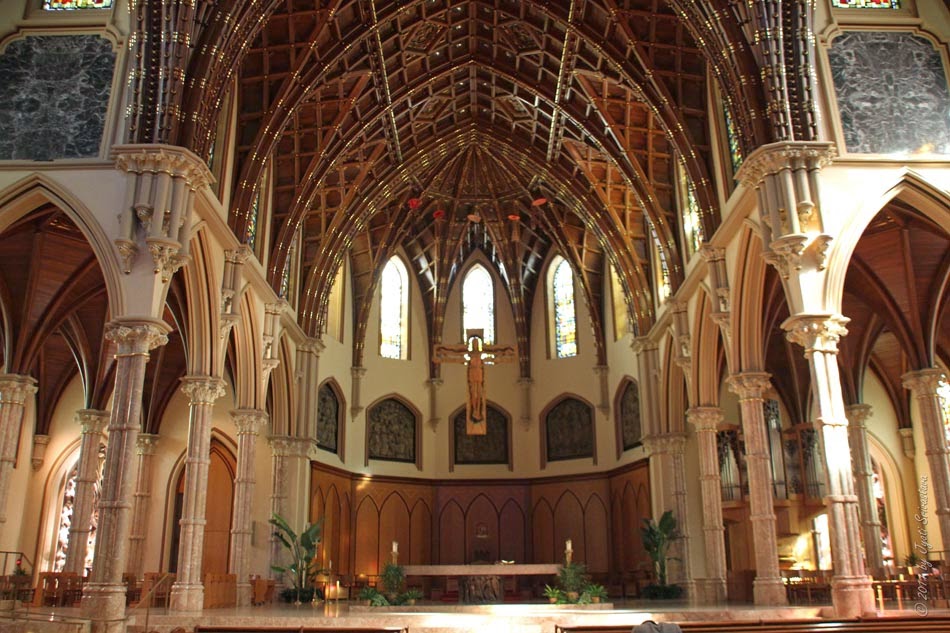 Basillica style does have the throne in the centre. As well as in Eastern Churches, the Throne is in the centre....that said. I'm glad it was moved, it'd be better if it was facing liturgical south, as in SS P & P in Philadelphia.

I agree with Joe Potillor, as usual. I would only add that one of the benefits of the present papacy is that we can do such things as placing the tabernacle in the center of a cathedral's sanctuary, since we are not rigidly clinging to the past. Perhaps that is next for Chicago. I know of one other US bishop who is planning to move the cathedra to the side, and he plans to place the tabernacle in the chair's former place.

I haven't heard the term wreckovation in a while! I am not sure what the obsession is with taking beautiful art and tearing it out so that we can set up a card table... I guess all of this art holds us back from bringing ourselves to heavenly desires while at church. I know they are distracting for me (sarcasm).

What a silly question! Have you not heard and do you not believe in Christ the King? He is the King of Catholics and the sacrament of Holy Order's fullness is the bishop the throne represents Christ who rules. Did you not know this?

Gob, no, we don't have kings or princes or, for the present "courtiers" who use the title "monsignor" (my lord). These unhistorical accretions, including the pope's triple tiara, ostrich plume fans, and portable thrones carried by "aristocratic" hangers-on are passe. Some, in a misguided desire for all things "majestic" would like the world to think that, if we can just turn the clock back to the 50's - the 1850's that is - all will again be right with the world.

FrAJM, sometimes you are too egalitarian. Goober site is getting under foot.

Bring back the reredo and tabernacle in the center! Gothic ecclesiastical cruciform architecture with apse cries out for that kind of a sacred focal point. Leave experimentation for modern churches in the round.

Yep, the tabernacle in Holy Name Cathedral is off to the side, on the left as you walk in, far on the back wall and almost not noticeable at all. It's lit up, but still, it's hard to tell. Then it's a kind of silver roundish globe sort of thing. Looks like something very 70's space age, (Sputnik without the antenna sticking out.)


And the "crucifix," suspended from the ceiling, a modern non-suffering figure of Jesus imbedded in the cross; a "Resurrection" crucifix.
http://www.thecross-photo.com/Resurrection_Crucifix-Holy_Name_Cathedral_Parish-Chicago_Illinois-Sculpture_by_Ivo_Demetz.htm

I sure hope Archbishop Cupich fixes these things (meaning, puts the tabernacle back in the center and gets a real crucifix.) Cardinal George never saw fit to do so.

The hanging crucifix which is modern just doesn't belong in that gothic building. This cathedral is very similar to our Cathedral in Savannah. Our cathedral still has the old altar/reredos although the tabernacle is in the side Sacred Heart Chapel to the left, but very, very nice. I think cathedrals should be cut some slack in terms of the tabernacle's placement and if I am not wrong in a Pontifical Solemn High Mass in the EF, the Cathedral's central tabernacle was to be empty.

The new altar and the wooded paneling are very 1970's and don't go with the building. The windows are hideous. The new altar has a huge menza but is on a circular pedestal. In the picture I post, one can hardly notice the altar. Large candlesticks on the altar with a central crucifix on it would go a long way in making it look a bit more traditional. This altar doesn't need floor candlesticks at all, which in fact elongate the altar and aren't noticeable from a distance.

Well what I am seeing is that the Blessed Sacrament is still off to the side and a bunch of ferns are front and center.

According to the Canon Law, the tabernacle should be in a side chapel in a cathedral.

Which canon is that, anonymous?

Perhaps you are unfamiliar with the Bible, but an epistle of Saint Peter (the first pope), proclaims "You are a chosen generation, a kingly priesthood, a holy nation, a purchased people".

I'm not certain if the new code has a similar provision.

Father, you say the second picture is a freestanding altar set up in the aftermath of the Council. It does indeed look like that, but if you look at the cathedral site's history page, it labels that image as being in 1958. Should we assume that's a typo, and they meant to put 1968, or might this cathedral have been engaging in "experimentation" much earlier?

Difficult to tell from the photograph whether or not concelebration is going on (which, if I'm correct, was first permitted more broadly in 1967). That would be a good indication.