POPE FRANCIS ISN'T IRRITATED AFTER ALL 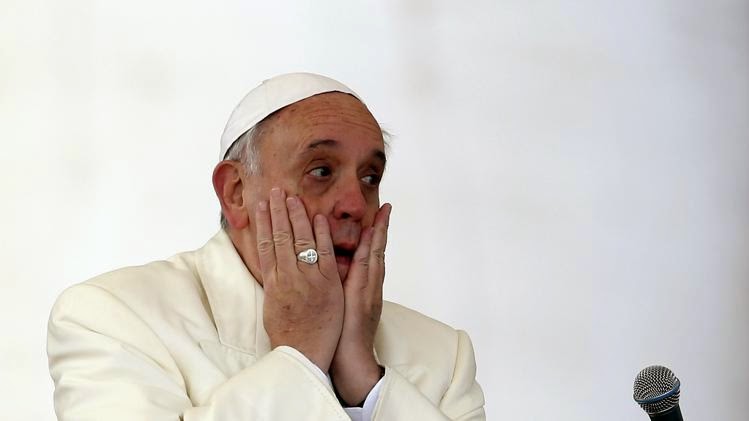 The French Catholic newspaper La Croix said Sept. 17 that “a senior source close to the Argentine Pope” claimed that Pope Francis would be “annoyed by the publication of this collective work.”

However, sources close to the Pope denied this claim, telling CNA that the Pope is not even aware of the book.

The book, from Ignatius Press, is titled “Remaining in the Truth of Christ: Marriage and Communion in the Catholic Church.” It is a collection of essays on the pastoral approach to Catholics who have divorced and civilly remarried. Authors of the essays include five cardinals as well as other scholars.

Contributors include Cardinal Gerhard Muller, prefect of the Congregation for the Doctrine of the Faith; Cardinal Raymond Burke, prefect of the Supreme Tribunal of the Apostolic Signatura; Cardinal Walter Brandmuller, president emeritus of the Pontifical Committee for Historical Sciences; Cardinal Carlo Caffarra of Bologna, one of the closest theologians to St. John Paul II in questions of morality and the family; and Cardinal Velasio De Paolis, president emeritus of the Prefecture for Economic Affairs of the Holy See.

The book is set to be published next month, around the time that the Synod of Bishops will be meeting in Rome to discuss issues involving the family.

The Ignatius Press book’s introduction says the essays in “Remaining in the Truth of Christ” are responses to Cardinal Walter Kasper’s 2014 book “The Gospel of the Family,” which includes his advocacy of giving Holy Communion to some Catholics who have divorced and civilly remarried without an annulment.

In the interview, Cardinal Kasper complained of learning about the book from journalists who had received advance copies of it. The cardinal said that he had not received an advance copy, adding, “In my entire academic life nothing like this has ever happened to me.”

“You chose to leave academia to enter public life. Get used to it,” Fr. Fessio responded.

The priest also referenced Cardinal Kasper’s statement, “If cardinals who are the closest collaborators of the pope intervene in this organized and public manner, at least in regard to the most recent history of the Church we are facing an unprecedented situation.”

“Well, you did something unprecedented,” Fr. Fession replied. “And it was organized and public. Well, it was supposed to be done in secrecy, but then you published your consistory intervention as a book.”

Furthermore, Fr. Fessio responded to Cardinal Kasper’s statement that his consistory remarks had not offered “a definitive solution” but rather “posed some questions and offered considerations for possible responses.”

“Well, what are you complaining about then?” Fr. Fessio asked. “You got some answers and some responses to your considerations. Or weren’t those the answers you were expecting?”

Controversy over the subject arose when Cardinal Kasper delivered a prominent two-hour address to the February 2014 cardinals’ consistory, which focused on the topic of the family. He has advocated his positon in other interviews and speeches as well.

During the consistory speech, Cardinal Kasper asked “is it not perhaps an exploitation of the person” when a person who has been divorced and remarried is excluded from receiving Communion. He suggested that for “the smaller segment of the divorced and remarried,” perhaps they could be admitted to “the sacrament of penance, and then of Communion.”

In an interview with Italian newspaper Il Mattino published Sept. 18, Cardinal Kasper charged that some bishops in the upcoming synod “want a doctrinal war.”

Catholic doctrine is “not a closed system” but “a living tradition that develops,” he said, adding that he is not “the target of the controversy,” but rather that the Pope “probably is.”

The contributors to the Ignatius Press book write that the Bible and the Church Fathers do not support the practice advocated by Cardinal Kasper. The authors say that there is no contradiction between “genuine mercy and compassion” and Catholic doctrine and pastoral practice. Catholic teaching is “based on the teaching of Jesus himself,” they say, according to the Ignatius Press summary of the book.

The contributors also consider the Eastern Orthodox approach to divorce and remarriage and Catholic resistance to it. They find “serious theological and pastoral difficulties” in the practice.

Coverage of the rumors surrounding the Ignatius Press book has been prominent among those who speculate or assume that Pope Francis intends to side with Cardinal Kasper’s position at the bishops’ synod.

Pope Francis himself has reaffirmed the indissolubility and lifelong nature of Christian marriage, such as his April 2014 remarks to the bishops of South Africa.

“The holiness and indissolubility of Christian matrimony, often disintegrating under tremendous pressure from the secular world, must be deepened by clear doctrine and supported by the witness of committed married couples,” the Pope said, stressing that these truths must be taught “with great compassion.”

Other critical evaluations of Cardinal Kasper’s position have come from Cardinal Angelo Scola of Milan, Congregation for Bishops prefect Cardinal Marc Ouellet and Cardinal George Pell, the last of whom is on the council of nine cardinals who are special advisers to Pope Francis.

This is very encouraging, although I find it a little strange that the Pope isn't even aware of the Cardinal's book.

Apparently there is also a new Vatican panel on marriage: