THE SYNOD ON THE FAMILY, FROM WHAT I'M HEARING NOT TOO MUCH IS GOING TO CHANGE OTHER THAN WHAT I'VE BEEN SAYING ALL ALONG! 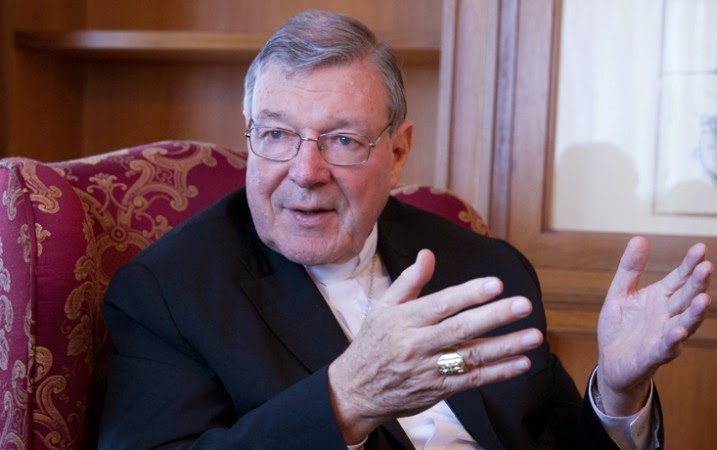 Cardinal Sean O'Malley of Pope Francis closest advisers has said there will be no contradiction between what is traditionally taught about the Sacrament of Marriage and its permanence and those who are divorced and remarried. They won't be allowed to receive Holy Communion.

He did say, though, that the annulment procedures will be looked at and perhaps streamlined. I don't know of any priest or bishop in the world that would be heartbroken about that. And we need to really listen to the spouses' testimony as theirs is firsthand.

Now Cardinal Pell is saying the same thing and going further at that! No change and he wants things even clearer and he's very close to Pope Francis and I presume a part of the real curia or inner circle of cardinals advising Pope Francis.

This is what he says:

By Francis X. Rocca
Catholic News Service September 17, 2014
VATICAN CITY — In a book coming out just before October’s extraordinary Synod of Bishops on the family, Cardinal George Pell rules out proposed changes to church practice that would allow divorced and civilly remarried Catholics to receive Communion.

“Doctrine and pastoral practice cannot be contradictory,” writes Cardinal Pell, a former archbishop of Sydney who now serves as prefect of the Secretariat for the Economy. “One cannot maintain the indissolubility of marriage by allowing the ‘remarried’ to receive Communion.”

The cardinal calls for a clear restatement of traditional teaching, to avoid the sort of widespread protests that greeted Pope Paul VI’s affirmation of Catholic teaching against contraception in 1968.

“The sooner the wounded, the lukewarm, and the outsiders realize that substantial doctrinal and pastoral changes are impossible, the more the hostile disappointment (which must follow the reassertion of doctrine) will be anticipated and dissipated,” writes the cardinal, who will participate in the synod.

The eligibility of divorced and civilly remarried Catholics to receive Communion is bound to be a major topic of discussion, inside and outside the synod hall, during the Oct. 5-19 gathering. According to church teaching, Catholics who remarry civilly without an annulment may receive Communion only if they abstain from sexual relations, living with their new partners “as brother and sister.”

Pope Francis has said the predicament of such Catholics exemplifies a general need for mercy in the church today. In February, at the pope’s invitation, German Cardinal Walter Kasper addressed the world’s cardinals at the Vatican and argued for allowing some Catholics in that predicament to receive Communion.

Cardinal Pell’s statement appears as the foreword to “The Gospel of the Family,” a book-length response to Cardinal Kasper’s proposal that Ignatius Press will publish Oct. 1. Cardinal Kasper’s address, published by Paulist Press, has the same title.

“A courteous, informed and rigorous discussion, indeed debate, is needed, especially for the coming months to defend the Christian and Catholic tradition of monogamous, indissoluble marriage,” Cardinal Pell writes.

But focusing on the question of Communion for the divorced and civilly remarried, he suggests, is a “counterproductive and futile search for short-term consolations.”
“Healthy communities do not spend most of their energies on peripheral issues and, unfortunately, the number of divorced and remarried Catholics who feel they should be allowed to receive holy Communion is very small indeed,” the cardinal writes.

“The issue is seen by both friends and foes of the Catholic tradition as a symbol — a prize in the clash between what remains of Christendom in Europe and an aggressive neo-paganism. Every opponent of Christianity wants the church to capitulate on this issue,” the cardinal writes.

Cardinal Pell acknowledges that the virtue of mercy, whose importance both Pope Francis and Cardinal Kasper have underscored in this connection, “is central when we are talking about marriage and sexuality, forgiveness and holy Communion.”
But the cardinal also emphasizes the “essential links between mercy and fidelity, between truth and grace.”

“Jesus did not condemn the adulterous woman who was threatened with death by stoning, but he did not tell her to keep up her good work, to continue unchanged in her ways,” the cardinal writes. “He told her to sin no more.”
Posted by Fr. Allan J. McDonald at Wednesday, September 17, 2014

I wonder what became of the survey that went out to all of the dioceses in order to gain views and input from the people in the pews?

In my diocese...in my parish, I never heard a word about it. Maybe the Bishop chose to just fill it out himself.

This is very good to read, but the anxiety over this Synod is killing me.

Yes, indeed, Gene, let's wait and see. I see Cardinal Burke as a true unsung hero of the Church...so sorry to see him "benched".

I just do not see how the annulment process can work. If about 50% of all marriages are dissolved by secular courts and most divorced remarry, the workload will be way too much for the number of experts available to judge nullity cases.

Overwhelmed by the workload, at the end, Kasper's position will prevail by default. As a result, the Church will loose credibility no matter what happens. Easy "Catholic divorce" discredits the Truth of the sacrament of marriage and in a generation or two ultimately nothing will remain Catholic. Historians will mark the October Synod in 2014 as the end of Reformation that formally commenced the 16th century. (There is something about the month of October, no?)

Fr. McDonald, is Card Kasper now saying that the Pope agrees with him?

"None of my brother cardinals has ever spoken with me," the cardinal (Kasper) said. "I, on the other hand, have spoken twice with the Holy Father. I arranged everything with him. He was in agreement. What can a cardinal do but stand with the pope? I am not the target, the target is another."

Asked if the target was Pope Francis, the cardinal replied: "Probably yes."

I can see why the Holy Father would be irritated. I would be most irritated by Cardinal Casper and his use of language to align himself with the Pope and all the others opposed to the pope, even if true.

The pope clearly has an affinity for Cardinal Casper's position. If adopted will there be a schism amongst the cardinals and the faithful?

these things have happened in the Church and there were certainly those who disagreed with Pope Paul VI on a number of areas.

Ultimately the Church continues and is always to be found in her fullness with the pope. No pope, no full communion.