DOES ONE HAVE TO BE CLAIRVOYANT TO BELIEVE THAT THE ANGLICAN ORDINARIATE REVISED ROMAN MISSAL IS PAVING THE WAY TOWARD AN ORDINARY FORM MASS THAT IS MORE IN KEEPING WITH THE TRADITION FROM WHICH IT CAME? 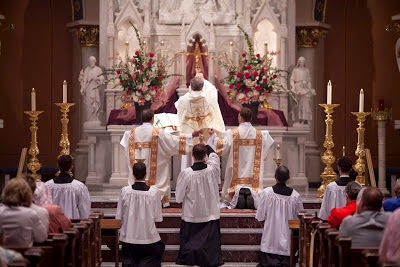 As I have written time and time again, I do believe one does not need to be clairvoyant to predict that the privileges allowed the Anglican Ordinariate's  Revised Roman Missal will be, one day and one day soon, made available to the majority Latin Rite of the Church.

To me it is a no brainer!

This is what Fr.John Hunwicke Mutual Enrichment Blog has to say about it and what I've been saying all along:

Quite apart from its sacral and hieratic style of English, the Ordinariate Order of Mass speaks very precisely to the problems of Liturgy in the modern Latin Church at this exact moment.

As you will remember, Pope Benedict XVI established that the 'Tridentine Rite' had, in fact, contrary to popular belief, never been canonically abolished. He clarified, authoritatively, that every single priest of the Latin Church had a right to use it without needing the permission either of the Holy See or any other ecclesiastical authority. So that there are two 'Forms' of the Roman Rite both lawfully in use.

But it is well-known that this great Pontiff looked ahead to a day when the two Forms would converge and eventually become again one single form of the Roman Rite. However, this is going to be a long job. There is so much irrational prejudice on both sides. Among some whose personal preference is for the Ordinary Form, the Extraordinary Form is seen as some sort of return to the Dark Ages of a pre-Conciliar, rigid, sin-obsessed, clericalist Catholicism which makes them wake up in the middle of the night in a feverish sweat. Among some whose own choice is the Extraordinary Form, their narrative of decades of ruthless persecution has made them resistant to the slightest change (in itself, an 'untraditional' attitude since Liturgy has always evolved, gradually and organically).

But the Ordinariate Rite constitutes a stage in that convergence for which Pope Benedict longed, and is thus of very profound significance not simply to members of the Ordinariate but to the whole of the Western Church. In many ways its basic structure is that of the Novus Ordo. But it includes ceremonial from the Vetus Ordo, perhaps most noticeably the double genuflexions at each Consecration. It includes optionally the Praeparatio at the foot of the altar, and the Last Gospel. Of doctrinal importance is its preference for the 'Tridentine' Offertory Prayers said by the priest, full as they are of the language of Sacrifice and Propitiation, and its restoration of the normativeness of the Roman Canon, the First Eucharistic Prayer, as a movement towards the longed-for and essential phasing-out of the alternative Eucharistic Prayers which Vatican II never envisaged and, indeed, by implication excluded.

These are all factors which contribute powerfully to the resacralisation of the Roman Rite, surely one of the most pressing needs of our time ... and I do not mean just liturgically.

If the new ritual creates 4+ new positions for altar boys so that you need at least 6 boys per Mass, that will have an immediate positive effect on the whole parish.

See, you already have the girls' attention. It's the boys and men who are hard to reach. So if you give them important jobs, stress it's vital that they get it right, make it 'hard' for them to do so have an adult man as coach...you create conditions ripe not for evil patriarchy but actual chivalry and a positive evangelizing of the culture.

After all, what is it that feminists blame for all the world's problems? MEN! Yes, so all the more reason for more men and boys to be brought to God's altar for reform!

The same goes for homilies. Craft them to reach out to that slightly cynical 20-something man. Catch his attention, answer his soul's hunger and fears and you'll capture everyone else by default.

Men are hard wired to fight the dragon so as to rescue the princess. We need to be needed for a difficult quest that is probably deadly but is necessary to save the innocent and defenseless.

Girls take note...nothing is more attractive to a man than a woman in need (even if you don't need his help).

But if you tell the boys that they're not needed, that this service is open to girls as well as boys, then it'll suddenly become a chore and boys abhor chores.

Yes, you'll get competent altar girls doing the small tasks perfectly...but you'll have lost the boys who grow to be men who won't come to Church because they're not needed there.

So...when we become Anglicans, I presume we'll be the conservative kind...not the kind that believe that all of us sinners are created equal...regardless of race, creed, color, national origin, sexuality... etc...

Fr Hunwicke (whose ordination at the Oxford Oratory I attended) celebrated his first Mass as a Catholic priest in the Extraordinary Form of the Roman Rite. The Ordinariate priests in England seem to regard this as their liturgy of choice. Fr Hunwicke also gives brilliant and entertaining (in the true sense) sermons.

An Anglican priest (Alan Hopes) resigned his orders in 1994 and was ordained as a Catholic priest the following year. He was recently appointed as Bishop of East Anglia and on All Saints' Day will celebrate a Pontifical Solemn Mass in the Old Rite in his own Cathedral in Norwich.

Ten years ago this would have been unthinkable.

Forgive me for repeating this: the very moment I knew I had to change to the local FSSP parish was during the first of a lecture series a few years ago where the visiting priest explained simply and cheerfully that we are in the presence of God and gestured toward the Tabernacle. Everything in the EF is geared toward being in the Presence and the participation of the congregation, through the guidance of the Priest and the attendants, brings us for that moment.

I have come across a few people, yankees in the language of my heritage, who claim insult when addressed as 'sir' or 'ma'am'. This false egalitarianism is rife in the NO as it is practiced in the USA and is no more clear than when it pushes the idea that Christ Almighty is my friend. The actions of reverence of the EF are also an act of reverence to each other, the quiet of the Low Mass brings the full participation of my raw senses, the sung Mass is pinnacle of our civilization laid at the feet of our Creator.

The vulgarity of the Old translation had become as intolerable as the trite tunes of the choir. There is no doubt that vernacular can approach the Latin in precision, although at some additional length, and can be as beautiful when sung. I hope the Anglican Revised Missal can help with this. Believe it or not people actually like beauty in the Mass and would be motivated to hear and see it.