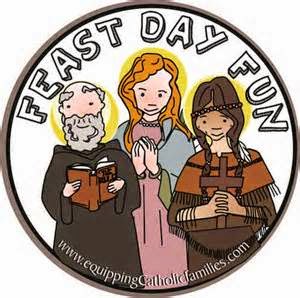 Yesterday as I drove back from a meeting in Savannah, I listened to the Catholic Channel's "Conversation with Cardinal Dolan." During the course of the program, Cardinal Wuerl of Washington, DC was interviewed about his new book, The Feasts: How the Church Year Forms Us as Catholics.

You can read a review of the book HERE.

It was a good interview and both cardinals acknowledged that over the course of time we as Catholics have lost some sense of our Catholic calendar and celebrating the various feasts of the Church throughout the year. They both acknowledged that there has been a recovery of sorts going on in this regard. So overall the interview was quite positive.

However, both cardinals are in a position to use their influence to bring about a more radical discovery of our calendar and to shore up what was lost in the post-Vatican II revision of it and the other revisions that local bishops' conferences or regions have made to it.

As well, obvious things need to be re-included into the revised Roman Calendar.

1. All Solemnities and feast days need to be on the days they were meant to be celebrated and Holy Days of Obligation should never be obligatory on some days and not on others, such as the silly Saturday/Monday dispensations from the obligation!

3. The three pre-lenten Sundays must be reinstated, the "gesima" Sundays before Ash Wednesday.

4. The recovery of the Octave of Pentecost and the season of the year after Pentecost

5. The ember days need to be re-instituted.

6. Fasts and abstinence need to be recovered! Each Friday of the year and the stricter fast for every day during Lent and the fast and abstinence associated with the four seasons of ember days.

7. Obviously devotions to saints and processions need to be recovered also and not just for St. Patrick's Day. The Latinos can teach us much on this as it concerns Our Lady of Guadeloupe and processions surrounding this feast as well as the Italians. There is no reason why Anglos can't recover Corpus Christi processions outdoors.

The bishops caused the decline in observing the calendar and in popular devotions and they continue to do so with arbitrary adjustments to the calendar that dumbs it down further rather than builds it up.

Provided, of course, they don't adopt the aberrant Ember Days calculation of 1962-1969, which we are unfortunately stuck with if you follow the Ex Form. Today--not next week--in any other Church reckoning is Ember Wednesday. The Anglican Ordinariate calendar wisely adopted the traditional method.

I'd add to your additional octaves optional memorial-level octaves for Epiphany, Ascension, and Corpus Christi. That way, if a diocese really wants to celebrate a feast day on a Sunday for pastoral reasons, they can do so as an external solemnity within the octave. Retain the real day, and have an "indult" day that Sunday. The Church did it that way on Corpus Christi for hundreds of years.

Finally, a couple of other things to consider restoring: the octave of All Saints, since we have a week of praying for the dead now anyway; the octave of the Assumption, since we have an octave day on the coronation; penitential vigils for solemnities; the Rogation Days; broader use of commemorations in the Mass and Office.

I tend to agree with the necessity of restoring the post-Pentecost season - it always has seemed to provide a more concrete chronological referent than "Ordinary Time." I'll admit, though, that I've never been properly catechized on "Ordinary Time." Could someone explain its putative benefits over against time after Pentecost?

In addition, multiple commemorations should be allowed in the Missal

It's always seemed to me that the "ordinary time" issue is a red herring. Granted that it sounds vaguely offensive--after all, what Sundays of our Lord are really just "ordinary"?

But the term "ordinary time" is an ICEL invention, peculiar to English, that doesn't really exist in the liturgy of the Church. The official term in the Latin liturgical books is "Tempus per annum" (time during the year). The “Sundays during the year” in the OF include both the Sundays after Epiphany and the Sundays after Pentecost in the EF that are not within any of the Church’s liturgical seasons, and have no seasonal liturgical flavor in their propers and readings.

Even as a TLM devotee—one who hasn’t attended a Sunday Novus Ordo Mass since before Summorum Pontificum—it seems to me a bit tidier to have 34 Sundays during the year to fill in the seasonal voids after Epiphany and after Pentecost, than the EF system in which we go through the Sundays after Pentecost, and then fill in the Sundays preceding the last Sunday before Advent with the Sundays after Epiphany that were unused earlier in the year. Tidier in that the Sundays during the year are covered in the same order every year, rather back-tracking different amounts in different years to make it come out right.

The point about Tempus per Annum is that it is not affected by the date of Easter; it stops at Lent and resumes after Trinity. So it is a rational concept which maintains a sequence of Sundays throughout the year. They shouldn't have suppressed Septuagesima in the Novus Ordo, however.

The fact that we are stuck with two calendars is because the compilers of the Novus Ordo went too far in emphasizing a break with the past. We can live with it, however.

Good news! The new parish priest at Holy Trinity, Hethe, a village about 12 miles away from where I live which has a lovely little 1832 gothic-revival church, has announced his intention of offering the EF Mass every Sunday at 12 noon. It is hoped that some of these will be sung and I shall be the first to offer my services. God is good.

"Fasts and abstinence need to be recovered". That would likely be much like the ban on "artificial contraception"...that is, hardly anybody would pay any attention to it.

On the positive side, though, it would present additional opportunities for Catholics to commit mortal sins. More would likely burn in hell.

Thanks for that reminder - it completely passed me by. Still, I do wish there was a bit more holding it all together, so to speak - a bit more in terms of overt liturgical and Scriptural congruity straight from Trinity to Advent. The fact that my attention wanders easily aside, it often feels as though OT is sort of an 'everything else' season, a season with no defining character like Advent or Lent.


septEMBER days have come again, just like they do each year
Ember Days that once we knew are gone for good I fear...