WHOM AM I TO JUDGE? OF COURSE POPE FRANCIS JUDGES MANY THINGS AND MANY PEOPLE, ESPECIALLY CLERGY 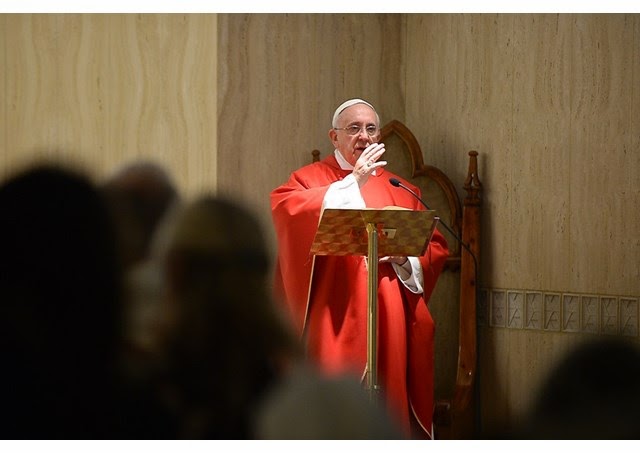 He's called some seminarians "little monsters" and he has judged some bishops and cardinals to be princes, the leprosy of the papacy is its court of princes. These are strong words of judgment from a pope that the Pope of the Media seem to forget.

The Holy Father judges that some people are under the influence of the devil and will live with the devil forever. He doesn't name names in this regard as His Holiness speaks in generalities. But clearly the Holy Father is making judgments about people's eternal salvation and damnation.

In His Holiness' homily this morning at the Vatican Motel 6's chapel, he judges good preachers who don't get close to their people as vain.

So, the Pope of Media doesn't judge but the real pope does. In fact Pope Francis may be the most judgmental pope in recent papal history.

(Vatican Radio) Beautiful homilies are useless if you are not close to the people, if you do not suffer with the people and do not give hope, they are vanity: This was Pope Francis’ reflection Tuesday morning during Mass in Santa Marta, the day on which the Church remembers the Saints Cornelius, Pope, and Cyprian, bishop martyrs.

The Gospel of the day speaks of Jesus approaching a funeral procession: a widow of Nain lost her only son. The Pope said that not only does the Lord perform the miracle of bringing her son back to life, he does something more, he is close to her. "God – the people say - visited his people." When God visits "there is something more, there is something new", "it means that His presence is especially there". Jesus is close.

"He was close to the people. A close God who is able to understand the hearts of the people, the heart of His people. Then he sees that procession, and the Lord drew near. God visits His people in the midst of his people, and draws near to them. Proximity. This is how God works. Then there is an expression that is often repeated in the Bible: 'The Lord was moved with great compassion'. The same compassion which, the Gospel says, that moved Him when he saw so many people like sheep without a shepherd. When God visits His people, He is close to them, He draws near to them and is moved by compassion: He is filled with compassion".

"The Lord – continued Pope Francis - is deeply moved, just as He was before the tomb of Lazarus". Just like the Father who was moved "when he saw his prodigal son come home".

"Closeness and compassion: this is how the Lord visits His people. And when we want to proclaim the Gospel, to bring forth the word of Jesus, this is the path. The other path is that of the teachers, the preachers of the time: the doctors of the law, the scribes, the Pharisees ... who distanced themselves from the people, with their words ... well: they spoke well. They taught the law, well. But they were distant. And this was not a visit of the Lord: It was something else. The people did not feel this to be a grace, because it lacked that closeness, it lacked compassion, it lacked that essence of suffering with the people".

Pope Francis continued: "And there's another word which is proper to when the Lord visits His people: 'The dead man sat up and began to speak, and He - Jesus - restored him to his mother'".

"When God visits His people he restores hope to them. Always. You can preach the Word of God brilliantly: there have been many excellent preachers throughout history. But if these preachers have failed to sow hope, that sermon is useless. It is mere vanity".

Looking at Jesus, who restored a living son to this mother - said the Pope - "we can understand what God visiting His people means. And so we ask for the grace that our Christian witness be a witness that brings the closeness of God to His people, that closeness that sows hope".

Again, the issue of how the manner in which His Holiness chooses to express himself unfortunately lends itself to false/inaccurate interpretation, requires...not anger, frustration, and hand-wringing...but prompt, forceful clarification by responsible Catholic leaders, both clerical and lay.

If bishops, pastors, etc., do not, or will not, then it is the responsibility of those with the means to do so, to take these corrections to the media, both Catholic and secular as quickly as possible to blunt the attempt by the enemies of the Church to add to confusion among the faithful.

I wish His Holiness would take time to learn how his manner of expressing himself is problematic in both the modern media context as well as translation, but...as the British say..."there it is"!

Where are the well-heeled Opus Dei and "Legatus" types who could easily take out full-page ads setting the record straight in The Washington Post, USA Today, The New York Times, and L.A. Times? Why are none of them jockeying for seats on the panels of Sunday morning network talk shows where, sadly, so much actual formation of Catholic minds seems to be taking place? Why aren't they funding 30-60 second ads on T.V. (again...where so much formation of conscience seems to take place) explaining the difference between the real Francis and the "media Francis"?

All I know is if I were to hit some gajillion-dollar mega lottery jackpot, I'd be spending a lot of bucks doing just that!

Well, I don't know if I agree with that premise. The introverted, selectively social person that I am, I naturally keep my distance from everyone...I can understand people from a distance without being "close" I rather prefer it that way...

As to Pope Francis being the most judgemental Pope in History, it's hard to argue when some have been called self-absorbed neo-pelegian retrogrades.