"WHO AM I TO JUDGE" AND "FRATERNAL REPRIMAND" WHAT IS THE DIFFERENCE?

Pope at Santa Marta: Do not take pleasure in others’ mistakes 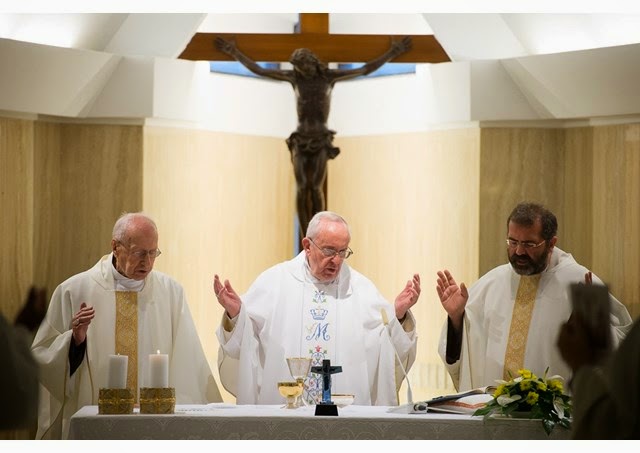 Okay, I admit it. Sometimes Pope Francis' homilies and interviews send mixed messages. On one hand His Holiness says "who am I to judge" a homosexual priest who is trying to live out his promises and is seeking the Lord but isn't a part of a lobby promoting sin which the Holy Father says isn't a good thing, lobbies that is. So in the same sentence Pope Francis judges the homosexual lobby!

And then this morning's homily Pope Francis gives practical advise on one of the "spiritual works of mercy" correcting or reprimanding the sinner.

This Pope gives simple, direct homilies that always have practical here and now applications. This pope does not give academic, esoteric homilies that are long and sleep inducing. But His Holiness words are fraught with inconsistencies or being manipulated by his hearers into sound bites that twist or do damage to the Holy Father's words and message.

If Cardinal Dolan really took Pope Francis' global message to heart including today's homily, he would have reprimanded anyone wanting to march in a parade honoring a Catholic saint like Saint Patrick, and doing so as a political lobby promoting sinful behavior. For example there are political lobbies that would want to carry a pro-choice banner in this parade. Would Cardinal Dolan applaud such a sinful lobby or lovingly reprimand the sinners doing so in fraternal correction?

Would any believing and practicing Catholic want to lead a parade that includes political and godless secular banners promoting sins against God, unborn babies and against marriage and nature? Do we really want banners carried by wife beaters proclaiming their violent orientation? Would not that banner bring the fury of the magisterium of the media down upon Cardinal Dolan for leading a parade with those holding such a banner? Is this sort of reprimand tolerant or intolerant?

Here is a summary of Pope Francis' homily:

(Vatican Radio) True fraternal reprimand is painful because it is done with love, in truth and humility. Moreover it is unchristian to take pleasure when reprimanding someone.  This was the focus of Pope Francis homily Friday during Mass in Santa Marta, on the day when the Church celebrates the Feast Day of the Holy Name of Mary.
Emer McCarthy reports.

The Pope was reflecting on the Gospel passage where Jesus warns against noticing the splinter in our brother’s eye but failing to see the wooden beam in our own. This inspired him to return to the subject of fraternal reprimand. First, he said, the erring brother should be reprimanded with charity.

"You cannot reprimand a person without love and charity. [Just like] you cannot perform surgery without anesthesia: you cannot, because the patient will die from the pain. And charity is like an anesthetic that helps you to receive treatment and accept reprimand. Take him to one side and talk to him, with gentleness, with love".

Secondly, - he continued - we must speak the truth: "Do not say something that is not true. How often in our community are things said about another person that are not true: they are slander. Or if they are true, they destroy the person’s reputation". "Gossip - the Pope repeated - hurt; gossip are a slap in the face of a person’s reputation, they are an attack on the heart of a person. "Sure - he observed - "when they tell you the truth is not nice to hear, but if it is spoken with charity and love, it is easier to accept". Therefore, "we must speak of other people’s defects" with charity.
Thirdly, we must reprimand with humility: "If you really need to reprimand a little flaw, stop and remember that  you have many more and far bigger!"

"Fraternal reprimand is an act that heals the Body of the Church. There's a tear, there, in the fabric of the Church that we must mend. And like mothers and grandmothers, who mend so gently, so delicately, we must do likewise when we want to reprimand our brother. If you're not able to do this with love, charity, truth and humility, you will offend, you will destroy the heart of that person, you will add to gossip, that hurts, and you will become a blind hypocrite, just as Jesus says. Hypocrite, first take the wooden beam out of your own eye. ...'. Hypocrite! Recognize that you are the more sinful than the other, but you, as a brother must help to reprimand the other".

"A sign that perhaps can help us in this" - said the Pope - is when we feel "a certain delight" when "we see something wrong" and consider it our job to deliver a reprimand: you have to be "careful because that is not coming from the Lord".

"The Cross, the difficulty of doing a good thing is ever present in the Lord; the love that leads us, the meekness is always of the Lord. Do not judge. We Christians tend to behave like doctors: stand on the sidelines of the game between sin and grace as if we were angels ... No! Paul says:' for fear that, after having preached to others, I myself should be disqualified '. And a Christian who, in the community, does not do things - even fraternal reprimand - in love, in truth and humility, is disqualified! He has failed to become a mature Christian. May the Lord help us in this fraternal service, which is as beautiful as it is painful, to help our brothers and sisters to be better and help us to always do it with love, in truth and humility".
Posted by Fr. Allan J. McDonald at Friday, September 12, 2014

Well, being a "self-absorbed promethean Neo-Palagian" I'll just remain silent put on my rose colored glasses and just watch it all play out. I'm not even going to say "Bravo".

Hey everyone, have a croissant to celebrate the Feast of the Holy Name of Mary.

So if anything are you at liberty to share with us from the annual priest retreat?

Themes, particularly helpful insights, any sense of the general mood and direction of the local clergy?

I know it's not a synod but we laity do want our priests to be spiritually refreshed, recharged, and recommitted to the hard and narrow road that your vocation as shepherds calls you to walk.

With so much bad news or frightening or disheartening news on the airwaves, tv, internet where everything seems to be collapsing, we need to know our spiritual guides are committed to the Gospel, to the Faith and are coming back with renewed zeal.

If not, then at least try to fake it a bit better!

A man goes into the forest. On the way he sees a man with no legs, one arm and one eye sitting by the edge of the forest. "What happened to you?" "I went into the forest and was attacked by tigers." "Were you going to warn me." "Heck, no. I'm no hypocrit. "

Pope Francis often contradicts himself...it's a headache for the faithful...We can't be blind and not see the problems from the top down.

Fr. would not post my comment…can't criticize Dolan. I guess it is just the Irish looking out for each other…eh, Paddy?

You can perform surgery without anesthesia... sure you can. The patient ***will not*** die from pain.

However, the pain may cause agitation and emotional distress which may cause--will cause--an increase in blood pressure which may increase hemorrhage.