THE THREAT HAS TO BE TAKEN SERIOUSLY!

POPE FRANCIS LIFE IS IN DANGER! 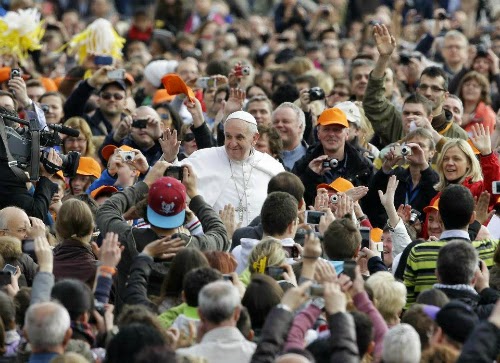 Rome (AFP) - Security has been tightened in Saint Peter's Square after intelligence services intercepted a possible plan to attack the Vatican, Italian media reported Saturday, increasing fears Pope Francis could be in danger.

A foreign security service alerted Italy this week after intercepting a conversation between two Arab speakers which referred to "a demonstrative act, Wednesday, at the Vatican," Il Messaggero daily reported.

Wednesday is the day the pope holds his weekly general audience in the square in front of Saint Peter's Basilica.

Checks by Italy's anti-terrorism unit revealed that one of the speakers passed through the country eight months ago, heightening concerns the threat may be real.

Earlier warnings that the Islamic State extremists may be plotting to attack the pope have been shrugged off by the Vatican, but security has nonetheless been increased for his Wednesday and Sunday audiences, the paper said.

The Repubblica daily said plain clothes special operations officers with sniffer dogs trained in seeking out explosives were helping Vatican police vet tourists, while hotels in the area were also being kept under surveillance.

The news came a day before Francis's trip to Albania, where the pontiff is expected to mingle with the crowds as usual despite reports of possible danger from new IS recruits returning from the Middle East to the mostly-Muslim country.

Some worry the pope has made himself a target by speaking out against the Islamic State group and having the Holy See voice support for US air strikes in Iraq.

In an interview with Italy's La Nazione daily this week, Iraq's ambassador to the Holy See, Habib Al Sadr, said "what has been declared by the self-declared Islamic State is clear. They want to kill the pope. The threats against the pope are credible."

The Vatican played down the warning, saying security measures for the trip would remain unchanged.
Posted by Fr. Allan J. McDonald at Saturday, September 20, 2014

Oh Father what solemn nonsense. Did not Fancis, the bestest pope everrrrrrrrrrrr say that Islam is a religion of peace. If anything they need to do away with security, after all he isn't some medieval prince.

I don't think this is a direct ISIS threat but an associated, or surrogate group with common goals. Out sourced, so to speak. Public attention does not bother ISIS but might deter clandestine groups. That should actually cause more concern. A lot more concern.

Indeed so, Anonymous. Islam is a religion of peace. Just ask Anon 2. Why Muslims are wonderful people…all warm and fuzzy, they love goats and camels...they may kill your dog or you pig…hell, they may cut of your head…but only in a peaceful way and only because Allah wants them to. We should all give them gifts…gifts that travel at @ 3000 fps.

I agree with the gifts lol

Islam is a cancer…and radiation is the treatment for cancer...

I have never called Islam “a religion of peace.” I leave the sweeping generalizations to you.

Anon 2, I never did say you called Islam a religion of peace. Your reading comprehension is as bad as Ignotus'. Is this a liberal trait or something?

Then please explain to this lexically challenged person just what you meant when you said: “Islam is a religion of peace. Just ask Anon 2.”

Anon 2, "Islam is a religion of peace. Just ask Anon 2," is merely suggesting that you would agree. It does not state that you actually SAID it, Lawyer.

Okay. As the expression goes, that is what we call “A distinction without a difference” (at least in the present context). And there is nothing "mere" in your comments, Gene. To accommodate you, however, let me rephrase my earlier response:

I have never called, nor would I call, Islam “a religion of peace.” I leave the sweeping generalizations to you.

P.S. Are you sure you’re not related to Bill “I never had ____ with that woman” Clinton?

I suspect you may be far more the "tricky lawyer" than I am.