CRUX AND THE POPE OF THE 21ST CENTURY, A VIDEO PANEL DISCUSSION

“The purpose of Crux is to get the story right,” John Allen replied, adding it was his goal to offer “an intelligent, thoughtful, serious presentation of the Catholic Church.” He described the divide as having a lot to do with a lack of contact with people outside their own groups: “I think we’re less polarized than tribalized. We live in affinity communities.” 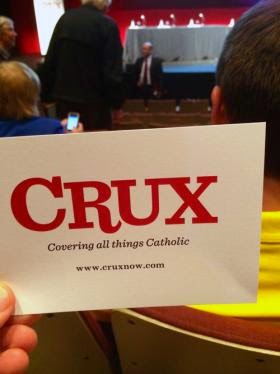 Press Here for the Video from Crux: 'A Pope for the 21st Century' panel. It is a long show but well worth watching. I love Cardinal O'Malley's take on Pope Francis and he sets the record straight on why Pope Francis lives in the Vatican Motel 6 rather than the former papal apparent.

Here is an editorial from Boston's Public Television that lets you know how much of a miracle this is and that if this kind of miracle can happen with a secular newspaper, no telling what else God's grace can accomplish:

The Catholic Church, The Boston Globe And A Jolt Of Cognitive Dissonance

For those of us with long memories, the scene at Boston College on Thursday created enough cognitive dissonance to induce vertigo.

Some two decades ago Cardinal Bernard Law invoked the wrath of God in denouncing the Boston Globe for its coverage of the pedophile-priest scandal. “We call down God’s power on the media, particularly the Globe,” Law told a crowd. Ten years later the Globe had Law himself on the run with a series of reports revealing the cardinal’s role in covering up the scandal.

And now? Cardinal Seán O’Malley was the star panelist Thursday night at an event sponsored by the Globe to mark the debut of Crux, its website devoted to covering the Catholic Church. O’Malley thanked Globe owner John Henry and his wife, Linda Pizzuti Henry, for launching the site. He praised John Allen, recruited from the National Catholic Reporter to write for both Crux and the Globe. And he expressed the hope that Crux would help foster “a better understanding of Catholicism.”
Among the crowd of several hundred: Globe reporter Walter Robinson, who led the Spotlight Team in its Pulitzer Prize-winning coverage of O’Malley’s predecessor. Michael Keaton will play Robinson in the movie.

Needless to say, much has changed over the past dozen years. A lot of it has to do with the man who was the subject of the panel discussion: Pope Francis, whose openness, humility and charisma have given the church an infusion of energy, even as he struggles to deal with the sexual-abuse crisis — an effort in which Cardinal O’Malley is his principal lieutenant.

Indeed, it is hard to imagine a project like Crux without a catalyst such as Francis, the subject of endless fascination since his selection in 2013. “We saw a need for more reporting, more journalism about the church,” said Globe editor Brian McGrory in his introductory remarks.

Crux, as I wrote last week, is a free standalone website aimed at the English-speaking world, and intersects with the Globe only tangentially. How tangentially? Well, this morning Michael O’Loughlin has a story on the BC event in Crux, and Derek Anderson covers it separately for the Globe.

If you were looking for some critical analysis of Francis’ pontificate thus far, you didn’t find much on Thursday. O’Malley called Francis “one of the most extraordinary leaders of our day,” and there was no disagreement from panelists Allen; Mary Ann Glendon, a professor at Harvard Law School and a former ambassador to the Vatican; BC theology professor Hosffman Ospino; and Robert Christian, the editor of Millennial, a website aimed at younger Catholics.

On a range of hot-button social issues such as LGBT rights, divorce and the role of women in the church, panelists talked about Francis’ compassion and outreach but played down the possibility of significant shifts in doctrine. As O’Malley said of the pope, “He hasn’t changed the lyrics, but he’s changed the melody.”

One of the more interesting lines of discussion began when Margery Eagan, who writes a column on spirituality for Crux (and who co-hosts Boston Public Radio on WGBH 89.7 FM), asked if Francis might bridge the gap between someone who is “a liberal Catholic” or “a cafeteria Catholic” such as herself and “a conservative Catholic” such as Glendon.

“I’m going to resist being called a conservative Catholic,” Glendon replied. “I think Francis helps us to explode those categories, which I don’t believe are relevant to Catholics.”

That led to a question from the audience, read by Crux editor Teresa Hanafin (audience members were instructed to write their questions on cards), as to whether Crux could help Catholics get beyond the liberal-conservative divide that Glendon believes is irrelevant.

“The purpose of Crux is to get the story right,” Allen replied, adding it was his goal to offer “an intelligent, thoughtful, serious presentation of the Catholic Church.” He described the divide as having a lot to do with a lack of contact with people outside their own groups: “I think we’re less polarized than tribalized. We live in affinity communities.”

He offered as an example his wife, whom he described as liberal, Jewish and suspicious of conservatives. Several years ago, when he was researching a book about the conservative Catholic organization Opus Dei, he said, his wife became friendly with some of the members.

“Friendship is the magic bullet when it comes to tribalism,” Allen said. “I want to create a space where all these tribes can become friends.”

It really depends on friends in higher places....Cardinal Law did indeed get the wrath of God, but I'd argue what Cardinal Mahony did was worse, and nothing happened (although both should have been shipped away)

As for the comments on Pope Francis...who am I to judge? TM

"Margery Eagan, who writes a column on spirituality for Crux (and who co-hosts Boston Public Radio on WGBH 89.7 FM), asked if Francis might bridge the gap between someone who is 'a liberal Catholic' or 'a cafeteria Catholic' such as herself and 'a conservative Catholic' such as Glendon.
“Friendship is the magic bullet when it comes to tribalism,” Allen said. “I want to create a space where all these tribes can become friends.”

So now the Catholic Church of today is composed of tribes? This is the language, the terminology of our modern culture which I myself would prefer not to be used As far as "conservative" or "liberal", while these terms are usually employed when discussing political matters, most in general know or have a pretty good idea of what these mean. Not so with "heterdox" and "orthodox". So, does being against artificial contraception, abortion, same -sex marriage and embryonic stem-cell research make one a conservative Catholic? Yes. Among the mainstream in places such as Boston New York, Chicago and Los Angeles and far too many other "Catholic" cities it does. At one time these positions this belief in Church teaching labeled you as Catholic and Orthodox. One can charitably get along with others of differing belief, but how in the world is it possible for Pope Francis or anyone else to bridge the gap between someone who is “a liberal Catholic” or “a cafeteria Catholic” and a "conservative Catholic” ? Studies have shown that those Catholic families who would be labeled "conservative' or "traditional" have historically provided the largest number of vocations not only to the priesthood and religious life but also to the U.S. military. I don't know what the latest numbers are but for the longest time the percentage of Catholics enrolled in the our military academies has exceeded the percentages of any other group in the general population. These families continue to provide the largest number of religious vocations. If this is what conservatism among Catholics produces, may I always be so.
Yesterday was the feast day of the Holy Name of Mary. October 7th is the feast day of Our Lady of the Rosary. Both of these feast days pay tribute to the Blessed Virgin's intercession in helping to secure victories over the Moslem forces at the battle of Vienna and that of Lepanto. We could use her help again.