And yet another take on the kerfuffles of the pope and cardinals and the synod. What are we to believe?


The Betting Is Open on the Next Synod

For the first time in decades, bishops and cardinals will get back together to clash over radically opposed ideas, in particular on the yes or no to communion for the divorced and remarried. It is Pope Francis who wanted to reopen the dispute. With an unpredictable outcome 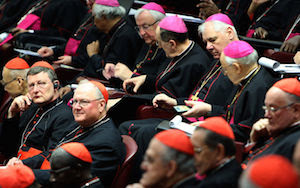 ROME, September 19, 2014 – The synod on the family scheduled for October at the Vatican resembles Pope Francis in one thing: it admits no predictions on how it will develop, far less on how it will end.

This is the way the pope wanted it: open to free discussion even on the most divisive points, like for example whether or not to give communion to divorced Catholics who have remarried in a civil ceremony.

One must go back more than forty years, to 1971, to the beginnings of the history of this institution, to find another nerve-wracking synod, that time on whether or not to dispense with the obligation of celibacy for the clergy of the Latin Church.

After a long and heated discussion, Paul VI set up a vote on two contrasting solutions among which the synod fathers had to choose.

The first was to hold celibacy firm for all, without exceptions. This second was to grant the pope the faculty to ordain “in particular cases, for pastoral needs and for the good of the universal Church” married man of mature years and untarnished reputations.

The first solution won with 107 votes, while the second received 87. Paul VI wanted the results of the voting to be published, including that on the final document of the synod, which was approved with 168 in favor, 10 against, 21 in favor with reservations, and three abstentions.

Since then, the obligation of celibacy has never been brought officially back into discussion. Nor has any other synod had to choose between such strongly contrasting options. The interest of the media in these events plunged to zero. Until this year.

Actually, there was one other upheaval that made the news, in 1999.

At the synod that year, Cardinal Carlo Maria Martini asked for the convocation of a sort of permanent council, with frequent sessions on hot-button issues like contraception, divorce, the place of women in the Church.

“I am not an antipope,” he said, “but an ‘ante’ pope, who goes ahead to open the way.” He guessed it. Because today there is a pope whose personal thoughts on the questions raised by Martini are not always understood, yet he has pulled them all back out and brought them back into discussion.

Francis began with the distribution, one year ago, of an open-ended questionnaire on all the questions concerning the family, from contraception to communion for the divorced, from de facto couples to marriage between homosexuals. And some national episcopates, with the German-speaking ones in the lead, revealed their results, igniting expectations of liberalization in the discipline of the Church.

But then, above all, Francis gathered a consistory of cardinals in Rome last February as a dry run for the upcoming synod. And to whom did he entrust the introductory presentation? To the German cardinal Walter Kasper, who back in the early 1990’s was a combative supporter of getting rid of the ban on communion for the remarried, but was defeated and reduced to silence, at the time, by John Paul II and Joseph Ratzinger.

Kasper’s talk is the only part of that consistory that has been made known, all the rest has remained secret. But to judge by the subsequent public forays of some of the cardinals, it is clear that the resistance to the changes proposed by Kasper has been and continues to be entrenched, belligerent, and authoritative.

Among the resisters who have come out into the open are cardinals Gerhard L. Müller, prefect of the congregation for the doctrine of the faith, Raymond L. Burke, Timothy M. Dolan, Marc Ouellet, George Pell, Fernando Sebastián Aguilar, Carlo Caffarra, Angelo Scola, all generally classified among the conservatives. But there are also cardinals viewed as progressive, like the Austrian Christoph Schönborn, who are joining the coalition against Kasper.

All of these will find themselves at the synod in a no-holds-barred fight against Kasper and his not equally solid supporters.

The fact that the “reactionaries” Caffarra, Scola, and Aguilar have been invited to take part in the synod by Francis himself has significantly chilled the enthusiasm for the current pope.

The American Jesuit Thomas Reese, the former director of the magazine “America” and an influential opinion maker, an all-out fan of Jorge Mario Bergoglio at the beginning of the pontificate, after this latest blow has moved definitively into the opposing camp, against what for him is a betrayal of the awaited revolution.

But the battle has just begun. The upcoming synod will not draw  any conclusions. It will have a second round in October of 2015. After which it will be not the synod, but Pope Francis, who decides what to do.
__________


This commentary was published in "L'Espresso" no. 38 of 2014, on newsstands as of September 19, on the opinion page entitled "Settimo cielo" entrusted to Sandro Magister.
Posted by Fr. Allan J. McDonald at Friday, September 19, 2014

The Psych ops in me suggests that Papa Francis came in, read the dossier compiled on the gay lobby and concluded that there must be more double agents involved in so many levels that merely dropping the hammer on them would not root out them all so he creates a honey pot trap.

Provoke hope for radical change...and then sit back and watch the various factions form, follow the email trails, follow the informal clerical meetings, watch and wait for various power nodes to reveal themselves as movers and shakers behind the scenes.

It's not very hard to do. In today's age of surveillance it's easier than ever.

20 minutes with an expert will reveal ways to watch for cell phone 'pings' and triangulate to reasonable accuracy that several people must be in the same general area and thus meeting together.

So if you doubt that Msgr. X has a liaison with Msgr. Y. watching the pings and why they seem to be together overnight or at some odd hour can reveal it.

That's why the NSA meta-data is so vital to national security. You don't need to even record the content of the calls to learn who is meeting with who.

If I were Pope I'd be doing precisely this sort of thing and drawing up a mosaic of who's who, who's what, and what might they want or be planning...and who is a faithful son or daughter and who is trustworthy or not....

Then have the summit, hear them out, reach out to them somehow...but then pull things back tight and again watch what happens. If they rebel, then they're the bad guys and can be let go with political cover as opposed to firing them now and being the bad guy for doing it.

Or I'm over thinking it, and he really just wants the debate and accepts the turmoil and confusion as an acceptable price to pay for some ulterior benefit to be had for hashing all this out.

It's very encouraging that Card Schonborn has sided against Kasper since he is in the "progressive" crowd.

I hope Pope Francis uses this October as an opportunity to consecrate Russia to the Immaculate Heart. It would be opportune having so many bishops together and in considering how popular Francis is and how unpopular Putin is.

Interesting comment by JusadBellum. I was recently wondering what ever happened to that dossier and the whole vatileaks episode. There's still a lot of unanswered questions. Something's rotten in the state of Denmark.

Jusad....you need an editor. Your messages are MUCH too long and windy.

"I hope Pope Francis uses this October as an opportunity to consecrate Russia to the Immaculate Heart. It would be opportune having so many bishops together and in considering how popular Francis is and how unpopular Putin is. "

Is that a joke or are you really that naive? Francis is going to promote Fatima. Fatima was where Our Lady said that more people condemn themselves to Hell because of sexual immorality than any other sin. Mr "who am I to judge" is going to promote Fatima. It's amazing that you put your faith in a man who calls no one to conversion, not even atheists.

Anon, I tend to write long missives because I don't have time to write short ones.