PAPAL LITURGIES UNDER POPE FRANCIS: TRULY A MODEL IN THE ORDINARY FORM FOR THE MAJORITY OF PARISHES THROUGHOUT THE WORLD

A photo any bride would want at her wedding! 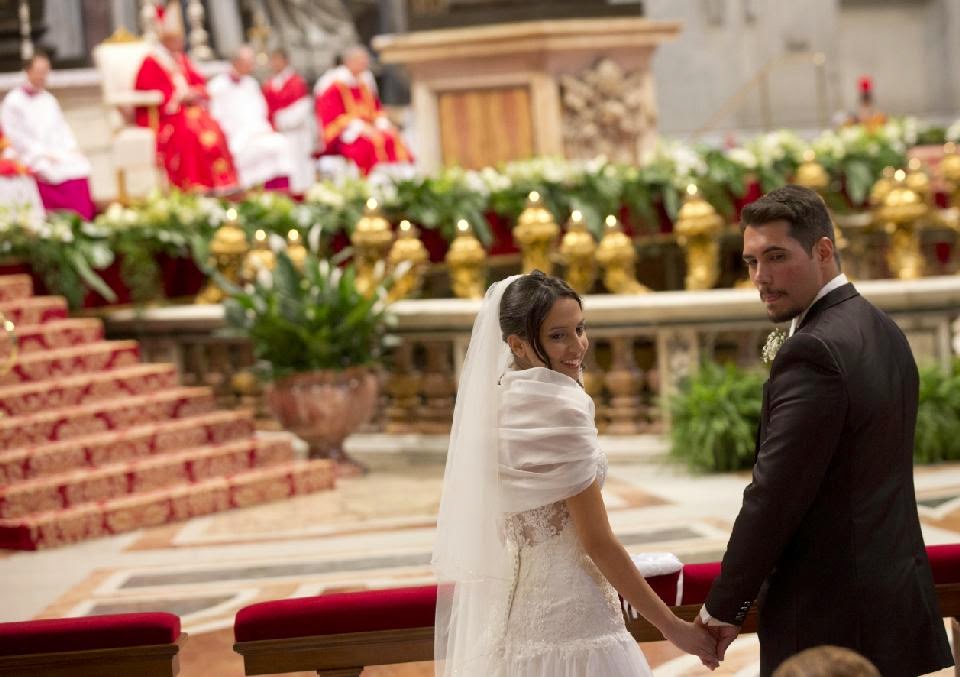 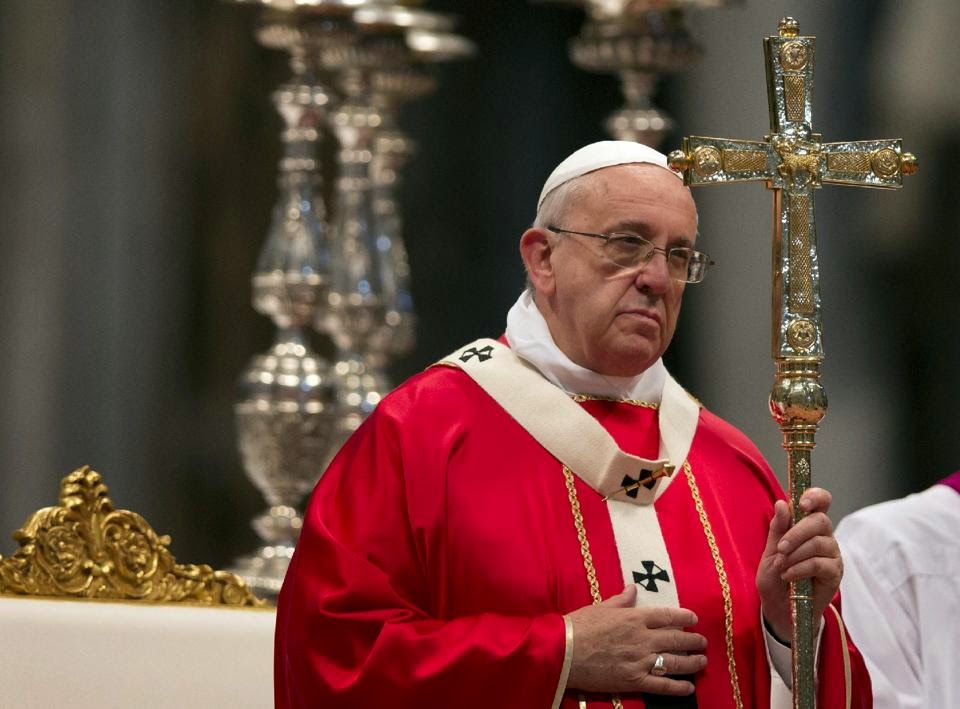 BOMBSHELL! Clearly an option in the Ordinary Form of the Mass, the newly weds receive Holy Communion kneeling and by way of intinction! I've advocated this for so long and now I have it confirmed in the highest Church on earth and in the presence of Pope Francis! It is good to be vindicated by such high sources! See it at hour 1 and minute 52 in the video.

Please note the altar railing set up in from the the couples married by the Holy Father: 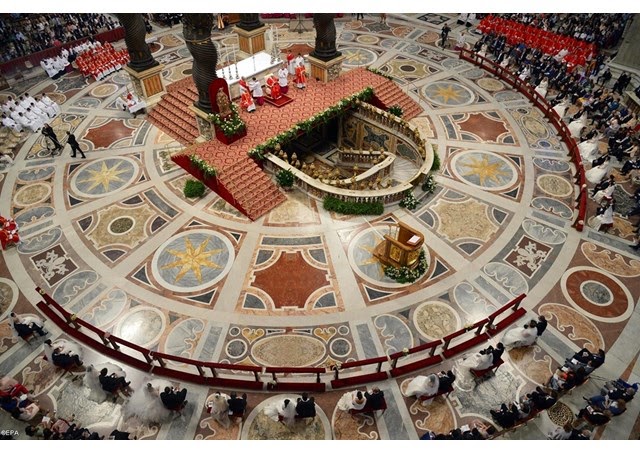 This morning Pope Francis celebrated Sunday Mass for the Solemnity of the Exaltation of the Holy Cross as well as the Sacrament of Holy Matrimony for 20 Roman couples. We Italians are such a handsome people if I do say so myself!

The Introductory Rite is interesting. In place of the Penitential Act, the Asperges is celebrated with the Blessing of the Holy Water in a unique antiphonal format. This is followed by the Kyrie which should never ever be omitted in any Mass but frequently is when the Penitential Act is omitted for some other ritual at the introduction.

Yesterday Pope Francis celebrated an outdoor Mass remembering the dead of the wars Italy has fought.

In both these liturgies, Pope Francis models once again the ability to celebrate the Ordinary Form of the Mass in a solemn and sober way. I've said it before and will say it again, His Holiness celebrates Mass facing the congregation in an ad orientem sort of way. There is no ad-libbing at the introductory rite and His Holiness reserve is completely evident. He disappears to allow Christ to shine forth.

Please note how the Benedictine Altar Arrangement (traditional arrangement of the altar candles and crucifix) is continuing to be modeled by Pope Francis in all his liturgies.  This certainly should be mandated by rubric or General Instruction throughout the world!

Novelties and bombshells. No stability or clarity of teaching Catholic Doctrine. Those neo con glasses are firmly in place.

When Bergoglio publicly comes out in support of communion for divorced "re-married" Catholics without amendment of life and confession, and when he tries to rationalize polygamy, wil you join his bandwagon or will you uphold the Faith? Will you admit that a pope who teaches heresy isn't really pope? They are valid questions and something people better start praying and thinking about. And don't say it can't happen, it is very very likely that it will happen.

Exaltation of the Holy Cross

Christ is Truth Incarnate.True followers of Christ can never accommodate themselves to the errors of the world. If we embrace the false values of the world, does not that lead to death? Christ, the Word made flesh, is the embodiment of all that is true and holy. Let us imitate Christ whose death on the Cross proclaims the Truth and whose triumph over death gives us hope for Eternal life. In the Cross of Christ is the Glory of God and our redemption. The "Father of Lies" is vanquished and defeated in this Triumph of the Truth which is Christ crucified. Those who possess faith in Christ, reflect the light of His truth. Our acceptance of the Cross and Christ's teachings is our defense and protection against the false values of the world. Whenever we make the Sign of the Cross, are we not proclaiming the Way, the Truth and the Life? Let us also keep in mind that we have recourse to the Blessed Virgin and other members of the Church Triumphant to aid us in our battle with the Infernal enemy and his deceit and dissimulation.

As for intinction, this is the only method I've seen used for Communion under both kinds at St. Peter's.

I distribute to the altar boys via intinction. I also use this method during "camp-out" Masses, such as for youth group retreats, to prevent the Precious Blood from spilling on the open soil.

Today the Pope performed a wedding for 20 couples. Some of them had been living together prior to the ceremony. Let's all send out a big attaboy to Rev. Francis.

Even Father Z has stopped defending this Pope, how can he???

I am not an apologist for Pope Francis and when I saw the headlines I thought the worst. But reading the article it seems that what he was doing is having a marriage for people who had messed up, but got their acts together. No one is perfect, but he is acknowledging the world as it really is and how it relates to the Church and natural Law. Another point is that there was not a lot of personal detail, as there should not be. They are sinners and will remain so for their natural lives. This is not a One Mistake Church, praise God and His Son. It was, IMO, a solid lesson for how the people floundering in modern society can find their way back.

"Will you admit that a pope who teaches heresy..."

Fr. McDonald, you should be ASHAMED of approving these comments for posting.

Why should Father not post our comments? We as Roman Catholics have our opinions or are we to be silenced like The Franciscans of The Immaculate???????

You guys are wasting your time in going apoplectic over nothing. Don't you have anything better to do FR. Z.?
Go out on the streets and proclaim the gospel...

I don't know, PI. People have legitimate concerns. The secular media portrays the Holy Father in a bad, non-Catholic way. I think we should allow people to air these concerns out and address them. I think there is still a lot of risk when Pope Francis does these things and does not take the effort to explain and map his actions back to core teachings. People easily get a feeling of entitlement for the sacraments.

I see nothing other than people leaving sinful situations and being married in the Church as God would want them to do. I hope many,many couples in similar circumstances will be persuaded to do this.

Ignotus, you are such a typical lib…trying to silence anyone who questions your progressivist buddies and ideas. There is nothing derogatory in those comments…they are legitimate concerns and questions.

rcg - First, legitimate concerns can be expressed without suggesting the pope is a heretic or is preparing to teach heresy.

These are absurd accusation with no foundation in reality. They are hyperbolic rants that are intended to be disrespectful. In approving them for posting, Fr. McDonald does damage to the office of the pope and, therefore, to the Church.

Pin/Gene - You are wrong - again. I am not attempting to silence anyone. I am pointing out that . . . See above.

Good unknown father, Pope Francis promotes dialogue not censorship. What this negative comment represents and why I post it and continue to do so, despite you censoring protests, is someone who feels like so many others. It is up to you to refute or enter into a dialogue with this errant poster. We need not censor him, we know their are ignorant Catholics out their who do not know the need to be Christian even in the comments they make especially about the Vicar of Christ.

So good PI deal with the comment in a constructive way and don't ignore that people in the Church, sinners to be sure, feel as this commenter does in his ignorance and imprudent, sinful language toward the Vicar of Christ.

Good Father, do you allow students in your school to post
signs that insult the Holy Father in your school so that other students will have an opportunity to "enter into dialogue" with them?

Are your lectors encouraged to bring their own translations of Scripture to read at mass so that congregants can respond "in a constructive way" in explaining why the KJV is not the best translation
to use?

Of course you don't.

So why, here, do you welcome and, worse, encourage people to be disrespectful and insulting to the Pope?

PI I am embarrassed for your silliness in mixing apples and oranges! Really you make these silly absurd comparisons? It is to laugh if not so sad. I weep for you instead.

Look I post here very often and I must state I for one don't care for this papacy I admit it, but I want to thank Father for being fair and posting my comments.

Good Father - You censor your school children, teachers, administrators, but not your blog posters.

Here you invite and encourage disrespect for the Church and for her bishops, but would never think of allowing it in your school.

Will you soon suggest that the recently fired high school teacher be re-hired so that the other faculty members can "enter into dialogue" with him or point out, "in a constructive way" that he is sinning?

There's no mixing of apples and oranges. The confusion is your own.

Hell, Ignotus, censor posters on the blog…Fr. won't even ban you, an eminently appropriate action. LOL!

Good grief, good Pater! An informal adult blog can hardly be compared to a formal, full time academic school for children; apples and oranges indeed...putting it mildly! I understand your point about respecting the HF, and I think Fr. MacDonald does as well. He urges you to deal with us sinners in a constructive way, and we all need to heed this point well-taken.

In this dispute about censorship of comments, why is no one referring to the text posted above the comment box? Isn’t this text supposed to supply the standards for what will and will not be posted?

As to the criticism of performing these wedding ceremonies for couples who had been living in irregular situations, we all know that Jesus never consorted with notorious sinners or asked them to turn aside from their sin and follow Him. He only had time with the pillars of the community. Shame on Pope Francis for not following the example of our Lord!

Correction – He only had time_for_the pillars of the community.

Indeed, A2. In fact, after scolding Fr. McDonald here, Pater Ignotus then goes to another post and makes a libelous, blanket statement against traditionalists.

Get real, everyone. Few people who get married have not had carnal knowledge of one another, and it was ever so. The medieval church of Chesterfield, England has a famous crooked spire. Legend has it that it twisted in astonishment when a virgin got married there, and will straighten itself when it happens again.

Flav Hesy - there's nothing libelous about telling the truth.