Small-minded liturgical distractions removing the emphasis from Jesus Christ and our personal encounter with Him in the Liturgy to signs and symbols making these small gods and horrible distractions: 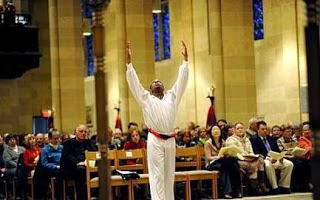 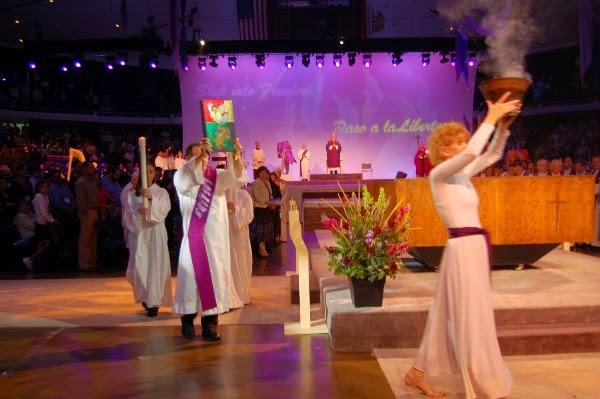 We cannot live in the past when the Ordinary Form of the Mass was the only form of the Mass that parishes could celebrate. That changed in the 1980's when Pope St. John Paul II allowed for a limited indult for those who wanted the 1962 Missal to have it. It changed further when Pope Benedict XVI allowed it to be one of the two form of the one Latin Rite which any priest in the world could celebrate. It has spread to almost every diocese throughout the world because of this.

But many (bishops included) live as though this change has not happened as though it is still the time prior to St. Pope John Paul's indult and the blanket permission for this Mass by Pope Benedict in 2007.  What are we to make of this?

Even Archbishop Blase Cupich has said, “You cannot base your decisions on a past era where things were different...”

The same archbishop wisely states the obvious about the liturgy:

It is clear [the bishops] must give priority to educating priests and people about the doctrinal and pastoral principles of liturgical renewal outlined by the Council. Specifically, that means bringing people to an authentic understanding of the Christian notion of the assembly. It means stressing the importance of liturgical signs. It also involves clearly defining worship as liturgical action, as dialogue between God and his people, and as a celebration of the mystery of salvation. These are all central principles.

What Archbishop Cupich writes can and should be applied to both forms of the Mass. But bishops today shirk their responsibility when it comes to the Extraordinary Form of the Mass, but sadly also for the Ordinary Form, to make sure these celebrations are as they should be in all their parishes.

For example, today, those who seek the Extraordinary Form of the Mass, participate in an active way, understand what is taking place and the majority receive Holy Communion. I can't speak for others, but I consecrate enough hosts at the EF Mass so that the laity receive Holy Communion from the particular Mass I am celebrating with them joining me. Just because a congregation is using the EF Mass doesn't mean that Vatican II's Sacrosanctum Concilium can't be implemented in terms of actual participation and understanding stressing the importance of the signs of the liturgy.

But shouldn't our liturgical celebrations in either form make sure that the "signs" of the Liturgy enable people collectively and individually to meet Christ? Should we be more concerned about "signs" and forget that one can become obsessed with these and place a religious encounter with the risen Lord in the back seat?  What has been the "small minded" preoccupation of liturgists for the past 50 years as the 1970 missal and its General Instruction were implemented? It was on signs almost disconnected from Christ Himself and the encounter with the Sacred that Catholics have had in the Liturgy for 2000 years and the awe, wonder and reverence this created and nourished them!

For example, a preoccupation with small minded rules about signs led to the iconoclasm of church buildings; emphasizing the assembly as if it were some sort of god; making more of who proclaimed the Scriptures, who entered the sancturay and served the altar and distributed Holy Communion rather than Who we worship; Who we hear in the Scriptures; why we have a sanctuary; and Who it is we receive in the Most Blessed Sacrament.

There was more concern with how the bread and wine looked and tasted, the action of a procession marching lockstep to Communion stations and joining in a song of some sort than actually receiving our risen Lord in the most personal and intimate encounter a Catholic can have with their Savior in the context of being a member of the Mystical Body of Christ.

Isn't it time that we actually recover the actual encounter with our Risen Lord in the Ordinary Form of the Mass where small-minded preoccupations and distractions placed the emphasis everywhere but where it should be? Should not both liturgies enable everyone clergy and laity to encounter in a most personal, communal and intimate way, Jesus Christ, His one Sacrifice and preparing us for our personal judgment wearing the white, unstained robe of salvation?

Liturgists trained in the 1970's, 80's and 90's will have a hard time letting go of their academic gods as it concerns the liturgy. Yes much of their studies was wasted on the wrong things and this is painful for those who have post-graduate degrees to acknowledge. No one wants to admit that they might have invested so much time, study, energy and money on something that is now irrelevant.

But this happens to people in and outside of the Church all of the time. Just think of factory workers replaced by machines, key-punch operators whose training and skill is no longer needed and priests who thought there would only be one form of the Mass (in either form) who have to move on from their academic small-minded rules to something else?
Posted by Fr. Allan J. McDonald at Tuesday, September 23, 2014

Who gets to decide when we ought to go back to some root, core, doctrine or rubric...and when we need to let it go?

I think I'm on safe ground stating that Catholics believe the Pope carries the keys for this reason. To bind and lose.

But the way it actually works seems to be more along the lines of people just beginning to do something new or stop doing something...and the trend spreads. And then ex post facto is declared OK or acceptable.

Instead of some theological commission, some mountain top retreat resulting in a change or modification.... there's just a push for change from the bottom, no one is challenged or stopped, and suddenly it's a fad and 'everyone is doing it'. People complain, but 'people are gonna do what they wanna do'...and finally the local ordinary says "well OK so long as we don't get carried away".

So are people holding hands during the Our Father? Yes, for the most part. It's not in the ritual but it's relatively harmless.

Are people agitating for adult altar women in albs or surplus'? Yes. And woe to any man who says "not so fast, it's not in the Vatican II document" (cause if you do, you're both a 'hater' and a fascist you know). Have they any good theological or historical reason or inculturated reason for doing that? No. Not at all, it's wholly new created out of wholecloth. But who is going to say 'no' to women who WILL go ballistic?

And so it goes.

One benefit of a closed rite is that it stays timeless and everyone settles down into their role and focuses on the word and eucharist rather than roles and constant flux.

Who gets to decide? That would be the Magisterium. As a body. Not the priest, nor even the (single) bishop. And saints preserve us, not the laity, the catechists, the theologians, or even the local liturgist.

Father, what is your opinion of the book "Rebuilt"? I ask because this past week, the pastor of my parish announced that he and the parish council will begin to implement the plans in that book. The critiques I've heard about it is that it takes a Catholic parish even farther away from true Catholicism, and sets it up as a protestant "mega-church" with some Catholic window dressing.

"One benefit of a closed rite is that is stays timeless and everyone settles down into their role and focuses on the (W)ord and (E)ucharist rather than roles in constant flux."

I couldn't agree more, Jusad Bellum. It would be such a relief and a blessing to be able to go to Mass and not worry about being confronted with all the variables (legitimate options and abuses in the OF) that are often at the whim of the celebrating priest.

The EF is low stress because you know what to expect regardless of the priest and regardless of the location. With the lack of all those options (and abuses) the focus is not so much on the VEHICLE (the form of the Mass) but, rather, on the PURPOSE (an encounter with the Saving Mystery of Jesus Christ through his Word and through participation in his once and for all Sacrifice made present on the altar).

I know this flies in the face of the typical post-VII liturgical attitude of most clergy and liturgists but it's just the truth. The EF (in its essence) IS noble simplicity!!

Father McD, no response about the book "Rebuilt"?

Sorry, I have been busy and now I am out of town. I haven't read it but will!