WHAT AN AWSOME CONSECRATION OF THE WORLD TO OUR LADY OF FATIMA AT TODAY'S PAPAL MASS, SUNDAY OCTOBER 13

As dumb luck or Divine Providence would have it, I had the perfect seat at today's Mass with the Holy Father where he consecrated the world to the Blessed Virgin Mary under the title of Our Lady of Fatima! I was on the front row directly to the right of the papal throne.

We distributed Holy Communion to the faithful toward the end of the Piazza and there must have been 200,000 there!

I just don't know about giving Holy Communion indiscriminately in these situations. I saw people taking the host and passing it to loved ones.

The Hosts we distributed were not consecrated at the Mass but a previous Mass. During the Offertory, we we ushered into the Basilica to take our ciborium with already consecrated hosts and then we stood in solemn line waiting for the Lord's Prayer at which point we headed out and fanned to the remotest part of the Piazza. It was impressive.

The Mass was beautiful. The altar was the Benedictine arrangement and with the candles straight across as Pope Benedict had them, not angled as these had been more recently.

The chants were great and the Mass was the Mass of the Angels. And of course the proper Introit was chanted as the pope arrived at the altar to incense it. 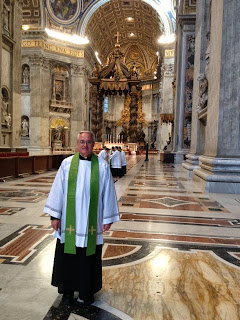 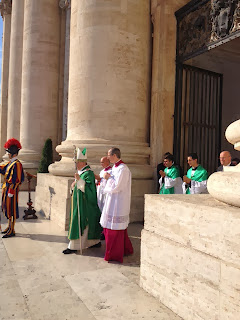 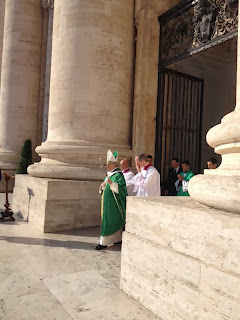 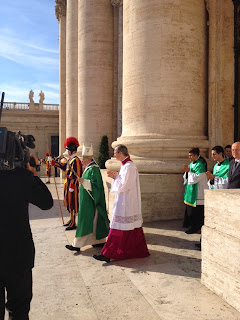 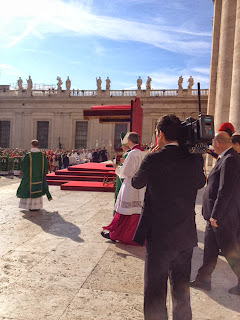 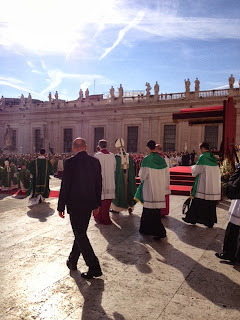 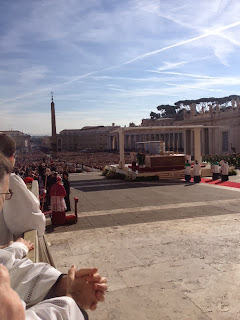 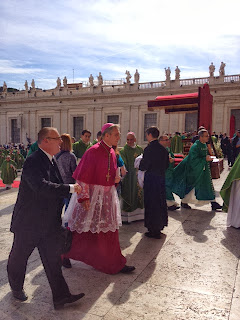 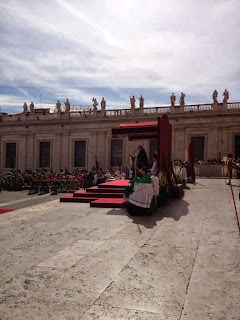 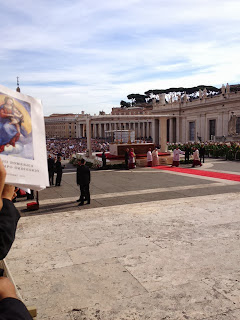 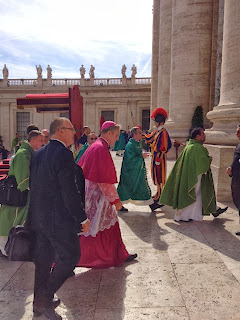 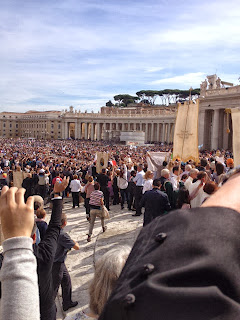 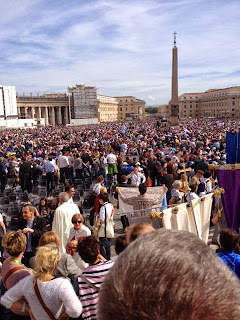 If you ever get a chance to speak to Mnsgr Guido Marini, please tell him he has a lot of supporters in the US who are praying for him to be elected pope in the future.

The Church needs to stop Communion in the hand, period. This leads to abuse. Thanks for the photos.

Talking about Msgr Marini, there are rumours flying around on Spanish and German websites that he's to be named bishop of Ventimiglia-San Remo (Genoa archdiocese). I do hope that's not true.

Yet the Mass is in Italian - why? It's surely an international occasion. Also, the Italian translation has not been reformed, and in this pontificate is unlikely to be so, so we have "per tutti" and not "per molti".

Now that Guido has had the rug pulled out from under him (all the consultors are now from the Piero Marini team) it's only a matter of time before he goes. The liturgical news which will come out of Rome in the foreseeable future will not be encouraging.

But I'm not too bothered. The situation is far different now from what it was in the 1970s. Any attempt to water down SP or allow liberal bishops to prohibit the TLM in their dioceses will meet with vociferous resistance and widespread non-compliance.

Thanks for being our 'fly on the wall'. I have had to resort to process of elimination to discern that the ministers of Holy Communion are being told to only distribute on the tongue.

Now we know for certain. The Pope, thru MSGR Marini, thru who-knows-who has the intention of eradicating hand Communion. It is the ministers (usually priests) who take it upon themselves to please the people and distribute 'any old way'!

The biggest problem, KC is that the MC who comes into the Blessed Sacrament Chapel to instruct us speaks to us in Italian. I understand Italian very well but I know many in the chapel distributing Holy Communion do not know Italian.

However, once you go to your station and you have literally mobs of people reaching out to you for Holy Communion, as though they are starving children in some 3rd world country, you or at least I freaked out and gave Holy Communion as best as I could but it was awkward.

In other words a better system for distributing Holy Communion needs to be devised. I don't know what that system would be, but the current one is broken and has been for a long time for these mega Masses.

"you have literally mobs of people reaching out to you for Holy Communion, as though they are starving children in some 3rd world country"

I don't know, Father, but I rather like this imagery.

For aren't we all children of God starving for Jesus Christ?

Anyway, thanks for sharing your story. It does sound incredibly awesome.

And speaking of which, is our pope as awesome in real life as seen on Youtube? :-)

In the large Masses I think it is a mathematical certainty that kneeling and receiving on the the tongue is MUCH faster. (As a humorous factoid the class of statistics for this proof is called 'Server Theory')

Actually, I think people should be educated to understand the value of the quiet time in adoration.

I was moved by those who couldn't get to me to receive and were reaching out and yes, they did remind me of starving third world people!

The Mass was awesome. Pope Francis is very subdued and almost without personality when he celebrates the Mass,even more so than Pope Benedict. Pope Benedict would normally acknowledge the crowds when he approached the altar, Pope Francis ignores them.

Pope Francis is more animated when he preaches, but not overly so. His personality or entertainer style comes out only when he is riding through the crowds, iit is as though he's a different personna.

I've said it before and I'lll say it again, his style of celebrating Mass is ad orientem although he is facing the congregation.

anonymous<<<<<
I don't know, Father, but I rather like this imagery.

For aren't we all children of God starving for Jesus Christ?<<<<<

I don't think I should let you have it both ways! Don't you know the original rationale for Communion-any-old-way was: 'Adults can feed themselves!!' :-)

And if you are serious about the child analogy, then you might drop any opposition to the Holy Father instructing that Communion is only to be distributed on the tongue. As he is currently doing.

I rather like today's Gospel's image even better than yours. The one GRATEFUL leper approached Jesus and fell at His feet!

But, they are not starving children in some Third World country...they are rude, self-centered, "me first" Catholics who should know better and behave better. They are deliberately contributing to the spectacle as if it were a sporting event.

"you have literally mobs of people reaching out to you for Holy Communion, as though they are starving children in some 3rd world country"

Let me also say thank you very much for sharing these photos and the happy memories of your trip.

Henry, I am familiar--I often do a spiritual communion these days when I am distracted by either inner OR outer turmoil. Turmoil of any sort renders me "unworthy to receive" IMHO. Focus is everything...

Henry, I just noticed your remark. I was thinking about this Sunday and frankly struggling with being worthy to receive, based on my distractions. This is a vital discussion that we might need to elevate to the greater public. I think it might be an intersection of our concerns with the dignity of the Mass with the need, and Pope Francis' concern to get more people into the Mass and thinking about what is going on.

There are times I think my youngest is totally zoned out of the Mass and I am concerned. Then something is said that grabs her attention and she will whip open the Missal to read a passage. She might later ask me about it. Sometimes it is about a particular phrase, sometimes something she observes worshipers doing. She is particularly wild at this age of eighteen, but also thoughtful. It tells me that others might also benefit from quiet exposure to the Liturgy.

I'm giving you this link because I think you will appreciate it. It concerns how we approach those who disagree with us---in this case regarding those who think Communion-any-old-way has been a positive development. My 'worthy opponent', M.P., really surprised me with her openness and her humility, real humility.......

I'm giving you this link because I think you will appreciate it. It concerns how we approach those who disagree with us---in this case regarding those who think Communion-any-old-way has been a positive development. My 'worthy opponent', M.P., really surprised me with her openness and her humility, real humility.......

Dear Father, Funny, Father Gruner and his people from the Fatima Apostolate were at this same event and they all confirm there were no words uttered by the Holy Father that were "consecration." No where on the 12th or the 13th did the Holy Father use the word and like a baptism both the word consecration and the name of the place consecrated MUST be mentioned. Funny also Father Gruner had a similar great seat but the officials would not let him be seated. Could it be they knew he would report the truth which they did not want reported?

We were at the mass and had to work our way through the chairs to get to the fence where communion was being distributed. The priest was on the walkway side of the fence and distributed it over the fence, which was awkward. It was such an honor to be there and would be important to any Catholic to receive the eucharist at the mass. I would think that ti would be very time consuming to have people line up and receive on the tongue and get back to their places. It would have been much better if the priest had been in the aisle and not had to reach over the fence, and possibly on the tongue would have been possible that way.