LAST NIGHT'S VIGIL WITH THE STATUE OF "OUR LADY OF FATIMA" AND HIS HOLINESS POPE FRANCI AND MSGR. GUIDO PIERRO

I wasn't going to go last night, but at about 5:30 PM I had a change of heart and put on my walking shoes and headed down the steep hill to St. Peter's Piazza. It was full of pilgrims and many were singing the very singable Italian songs in honor of Our Lady. It was a very moving devotional. The pilgrims all waved white handkerchiefs at the statue of Our Lady from Fatima which contains the bullet that passed through John Paul II in its crown.

Today, I walk down the steep Geniculum hill in cassock with my ticket to St. Peter's Basilica to get ready to distribute Holy Communion at this papal Mass. I've been to a papal Mass a couple of times with Pope John Paul II. In fact as a seminarian I distributed Holy Communion at the papal Mass on the Mall in Washington, DC in 1979. I attended the papal Mass for priests and religious in Philadelphia on that same trip. It was in an auditorium and more manageable.  I've never been to a papal Mass in Rome, although about 6 years ago with our church choir we attended the beatification of Spanish Martyrs at an outdoor Mass in St. Peter's Piazza. But a cardinal, not Pope Benedict, celebrated it and it was jammed packed with Spaniards.

More on the papal Mass later. Here are a few photos I took last night: 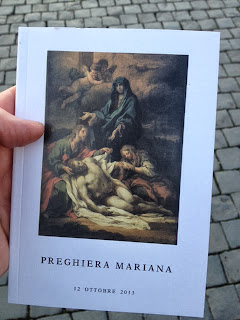 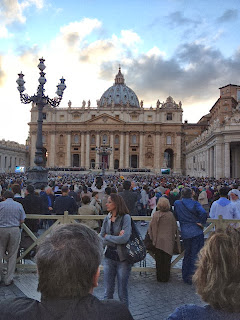 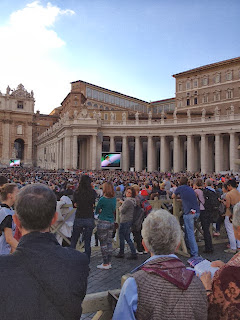