THIS COULD BE ANY PRIEST IN THE WORLD CELEBRATING MASS BUT IT WOULDN'T MATTER WHO IT WAS BECAUSE CHRIST IS THE FOCUS NOT THE PRIEST AND IN THIS CASE THE PRIEST IS THE POPE!

The most damnable aspect of the Mass facing the people is that the priest himself becomes the center of the celebration. And if that priest is an extravert or a want-to-be extravert, he can manipulate the Mass to make himself the star or he can influence the style of the celebration of the Mass completely destroying the Church's intended ethos for the Mass.

All of us have examples of how the priest's personality becomes the center of the Mass and how many parishioners prefer one's priest Mass over another's, the "cult of the personalty."

Yesterday, at St. Peter's Basilica, Pope Francis, like many other priests throughout the world, celebrated Mass at one of the many side altars there and did so ad orientem. A visitor to the Basilica that morning walking past the pope celebrating Mass in this fashion would have no clue that it was the pope celebrating Mass. It could have been any priest or bishop throughout the world.

What would have been important to the passer-by is that the Mass was being celebrated and the One Sacrifice of Golgotha was being made present in an unbloody way for those present to experience that Sacrifice in the now and the Body, Blood, Soul and Divinity of our Risen and Glorified Lord would be available for those cleansed of sin, mortal and venial in order to show that they are in full communion with Jesus Christ through His Church of which we are His Body and He is our head, we are the Bride of Christ collectively as "souls" (anima, a feminine Latin word for soul) and He is the Bridegroom. Our Lord begets adopted children of God through Holy Mother Church! 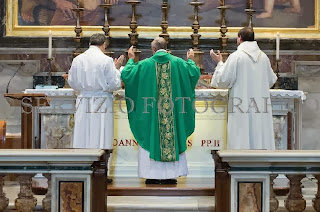 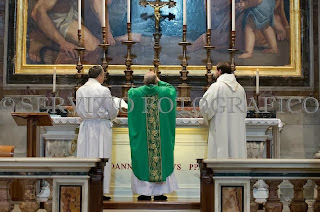 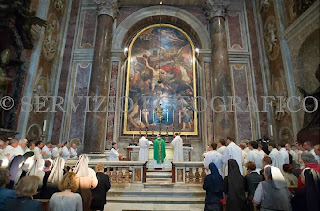