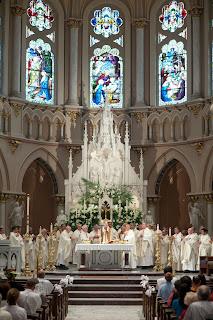 With the recovery of the form of the Mass and sacraments from the post Trent era, there has also been a recovery of the different rites of the Church of that period too. For this we must thank Pope Benedict XVI and his vision for Summorum Pontificum which unshackled the liturgical life of the Church of the post Trent era for a broader experience of it for the faithful.

So today we have the Ordinary or normative form of the Mass which in itself either by way of law or unlawful liturgical creativity has a variety of styles to it, not only in form but music and cultural accretions. It can look and feel like the pre-Vatican II Mass if sung and spoken in Latin ad orientem or it can look like a Methodist Church liturgy through liturgical creativity and iconoclasm.

We also have the Extraordinary Form of the Mass. It is reigid in terms of rubrics and style and is not open to experimentation or creativity.

Along with the EF Mass we have the various other rites of this genre being recovered as mentioned above.

Of course we already know that the Anglican Use Mass allows for something that one would hope will be extended as a option to the Normative or Ordinary Form Latin Rite Mass, the options of the Prayers at the Foot of the Altar to replace the Penitential Act with a reorientation of the order of the Introductory rite more according to the EF format. Also the EF's Offertory Prayers and the rubrics for the Roman Canon in the EF Form although with the option of the vernacular is allowed and the Last Gospel.

One would think if the Anglican Use Mass can have these optioins with a Roman Calendar that includes some EF sensibilities such as Septuagesima and ember days and the Octave of Pentecost, that these would be extended to the normative Latin Rite in the Ordinary Form. One can only pray that this would be so.

But someone has brought up an interesting thing. If Anglican Use priests, those who are former Episcopalians ordained as Catholic priests for the Anglican Ordinariate have the option of celebrating Mass in all the forms allowed in the Latin Rie, such as the Extraordinary Form, the Ordinary Form and the revised Anglican Use Mass, why can't this be extended to all Latin Rite priests and parishes?

Of course, currently any priest can celebrate the Ordinary Form. They can celebrate the EF if they know how to red and chant the Latin but Ordinary Form Latin Rite Catholic priests have not been authorized to celebrate the revised Anglican Use Mass, although I suspect a local bishop could grant permission based upon need if there were a significant number of former Episcopalians in a particular Catholic parish.

What do you think? Should all Latin Rite priests have permissioin to celebrate not only the OF Mass along with th eEF Mass but now also the Anglican Use Mass?
Posted by Fr. Allan J. McDonald at Thursday, October 31, 2013

What I think is that the Liturgy is a mess and that no one seriously wants to clean it up. Most places I attend, the OF is a joke…uninspired, tired, half-assed, and obligatory. The flavor depends upon the Priest. Very few parishes celebrate the EF at all.
Doctrinal unity is also a mess because the behavior and statements of Priests, Bishops, and "womenses religious (sort of)" do not reflect belief in Catholic doctrine or dogma. And, the Pope is no help, Bishops are no help, and most Priests do and say pretty much what they want to with impunity.
I had this conversation with a parishioner from a Church I attend when I cannot make St. Jo's: I asked, "Are all the masses at Sacred Heart pretty much the same?"
She: "Well, the college Mass at 5 pm is more like folk songs and real casual."
Me: "All the Masses seem real casual."
She: "Well, Fr. is pretty laid back. He doesn't like formality."
Me: "Yeah, I notice he shakes hands and greets people during the processional and pats the Deacon on the back after he blesses him for the Gospel reading. Does any of that bother you?"
She: "No. I'm just there to receive. All that other stuff doesn't matter to me much."
Me: "So, really, then, if Mass just consisted of everyone going in and straight up to the Priest to receive and then leaving that would be enough?"
She: "Well, I guess technically yes. But, I like seeing everybody, you know, keeping up and singing some of the songs. It is good for everybody to be there together."
Me: "Yeah, well you can do that at a football game."
She: "Aw, come on, Gene, it's not that big a deal. It is just Mass.

Now, tell me this attitude is not prevalent today. Then, tell me we do not have a problem. All this "unity in diversity" talk is smoke and mirrors…just like in our social and political milieu…it does not exist.

As much as I hate to agree with you, the way the Vatican II Mass, what is now called the Ordinary Form, is celebrated is a mess in many, many parishes. So many priests think the casual, folksiness that you describe is what is required.

I don't think this will be the case with the Anglican Use Liturgies, it certainly isn't the case with the EF which can fall into rubricism and formality in a robotic sense, but at least preserves solemnity and decorum.

The OF can have a beauty to it, but it needs a reorientation and more specific theology of reverence and solemnity.

This liturgy has a specific purpose that is intended for former Anglicans/Episcopalians. From the USCCB website: "Anglicanorum coetibus was a response to repeated and persistent inquiries from Anglican groups worldwide who were seeking to become Catholic. Ordinariates seek to provide a way for these groups to enter in "corporate reunion"; that is, as a group and not simply as individuals. This will allow them to retain their Anglican liturgical heritage and traditions."

When a Latin Rite priest is granted faculties to celebrate one of the Eastern Rites, it is usually done because there is a need for his ministry in an Eastern Rite congregation.

The bishop of Manchester, NH, is bi-ritual. In an interview with the Union-Leader he explained why this came about: "He said he agreed to learn to celebrate the Byzantine Ruthenian Catholic liturgy when asked to help minister to the many Ruthenian Catholics in metropolitan New York."

Is "bi-ritual" some kind of liturgical AC/DC?

There are some who,falsely inspired in what they believe to be
the "spirit" of Vatican II, would caregorize some as being too litugically fastidious.
These have similar attitudes to the person Gene talked to who was at Mass "just to receive".
While it is true the Eucharist in itself is the "source and summit" of what we believe, The Body,Blood,Soul and Divinity, together with the liturgy form the greatest prayer of the Church.

The question I would put to some is:"Are we to treat God as only just some kind of Divine vending machine?"
The liturgy of the Mass takes us to
the summit, the pinnacle, which is the Eucharist.
The fasting before Mass and the prayers and supplications of the liturgy serve (or should serve) to prepare us and put us in a proper and fit
spiritual state to recognize and engender a greater awareness and appreciation of Who we are receiving in Holy Communion and that we are part of the Mystical Body of Christ and not just present for our benefit only. .

Our attendance at Mass is both worship and thanksgiving. Those who run out early after receiving or who show up late just in time to receive and then leave are like the ones Jesus healed who did not return to thank Him. The one who did return to thank Him is our example for attending Mass properly.
I like the example of George's "Divine vending machine." That attitude is too wide-spread.

Many people don't need or like "creativity" during Mass. They prefer the stability and familiarity with a Rite which does not change. I think all too often it is Priests who want creativity out of a sense of "boredom" perhaps. Most people I know like the stability of knowing what to do and what to sing.