My sabbatical and pilgrimage are truly astounding and awe inspiring. It has truly been a blessing and I give thanks to Bishop Hartmayer for allowing me to take this sabbatical and for the diocese to pay for it!

On Friday, we arrived in Jerusalem. The manner in which we drove up to Jerusalem hid the city on the hill from us entirely. As we approached a tunnel, our tour guide, who is a wonderful, spunky Jewish woman put a recording of a famous song to Jerusalem. It is secular/religious. I had not heard it before, but others in our group had heard it and were able to sing its marvelous refrain. The refrain to it is, "Jerusalem, Jerusalem..." and we did not sing that refrain until we exited the tunnel and before our eyes, there was Jerusalem, Jerusalem! I had tears in my eyes for the moment was so dramatic and unexpected and choreographed brilliantly by our tour guide and bus driver!

This is what I felt. The tunnel we took was maybe a half mile or more long. It was like the tunnel that many describe who have "death experiences" and return to tell about them. And then I could see light at the end and as we emerged and Jerusalem lay before us, it was like entering the "New Jerusalem, Our Happy Home." I must say that I had the most erie, or better yet, spiritual feeling that my mother was on the other side of that tunnel and had been there although, my mother has never been to Jerusalem! Her presence was felt and so strong was it I had a dream about her that night! Jerusalem of course is a metaphor for us Christians of heaven, the New Jerusalem. I wonder if we don't all come here for our personal judgement at the hour of death? I wonder if we actually travel here, are tunneled here.

Of course, many believe that the Final Judgement will occur here when our Lord returns at the Second Coming. The Jews believe this also, although for them, they still await the Messiah. Of course He has already come, we await the final judgment. There are graves all around the area where Jesus will return, mostly Jewish, but Christian also. They have the front row seats to the final judgement and the resurrection of the dead.

It is too difficult for me on my iPad to put captions on each picture below. But I think you get a sense.

Walking the paths of Christ from Galilee and now here in Jerusalem is beyond words for me now. We went to Bethlehem today and were given the rarest opportunity (our group of priests) to celebrate Mass in the Grotto where Jesus actually was born. It is a tiny area and it was stifling hot. This altar is about three steps lower than the actual place where Jesus was born. The altar is our Latin Rite jurisdiction, but the actual spot of Jesus' birth right next to it belongs to the Greek Orthodox jurisdiction, but all in the same Church's grotto. After Mass, despite the fact that I having some trouble, not terrible, but not normal either, with my right knee and thus I must be very careful how I use it, I was able to get down on all fours and kiss the floor before the actual birth spot of our savior in this grotto or cave like structure. We sang Christmas music for the Mass and wished everyone Merry Christmas at the Sign of Peace. Here, Christmas is every day! This was very moving and it is going to take me time to process all of this.

I love Jerusalem! What a fantastic city and beautiful. The Jewish section is clean and well cared for. Our Hotel is Vatican owned and run by the Legionaries of Christ. It is like a castle, absolutely spectacular and right next to the new gate of the old city. There is no better location in the city for a hotel. The Hotel is called Notre Dame--google it (in Jerusalem). The full name of the hotel is "Pontifical Institute, Notre Dame of Jerusalem Center!"

We also were given special access to the Garden of Olives where Jesus prayed that "His Father's will be done..." This garden is not open to the public but it was to us and is next to the Church where Jesus prayed at the rock in the Garden of Gethsemane. I have pictures of the interior of this Jesus and the actual rock in front of the altar, which I was able to get down on all fours and kiss!

Then we went to the Jewish Wailing Wall. I had a note prepared with prayers and special intentions for my family, deceased loved ones and for everyone in my parish. The area we went to was for men only and we had to cover our head with a hat or skull cap. This was a very moving experience also. The wall is the foundation of the Jewish temple that was destroyed in 70 AD. The Muslims have a mosque above it as they took over the land that was Jewish to begin with. Thus we see the animosity that is centuries old between the two groups. No end in sight.

This evening after supper in the hotel, we view a film on the Shroud of Turin which is very well done we are told. It is not usually shown the general public, but we have special privileges for some reason. I'm not complainng! 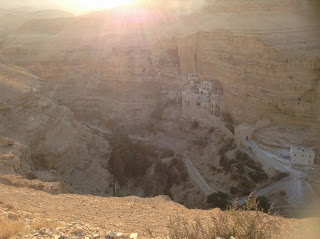 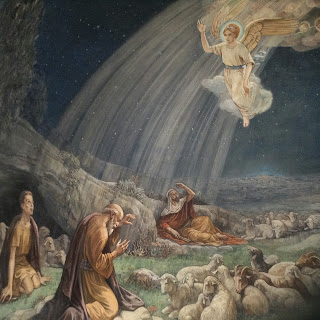 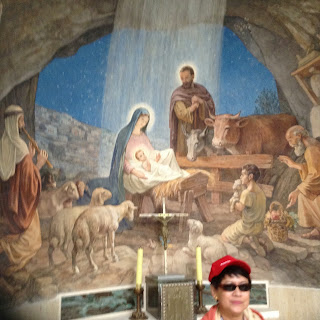 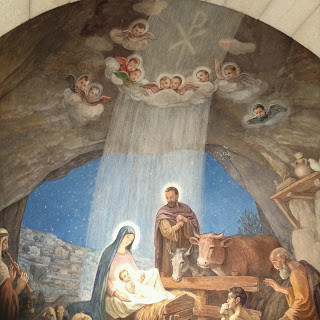 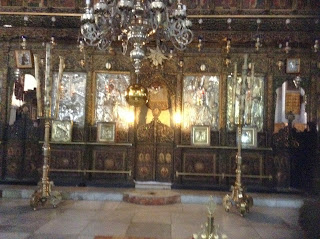 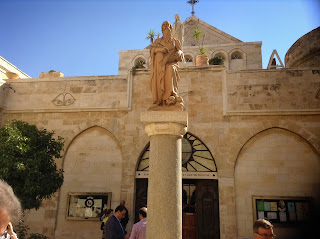 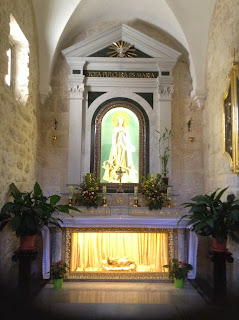 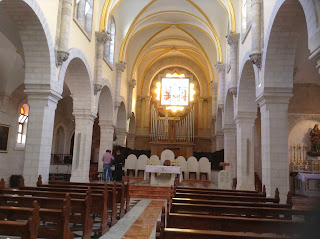 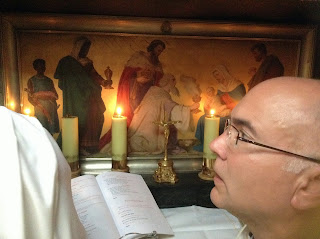 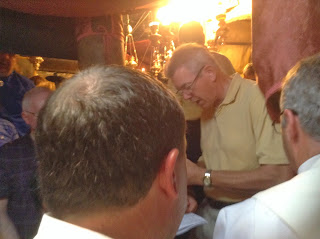 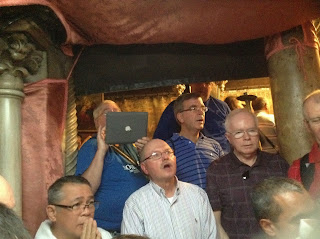 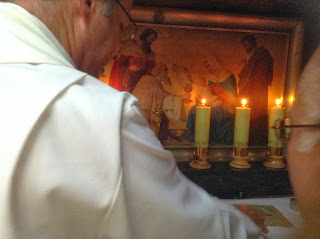 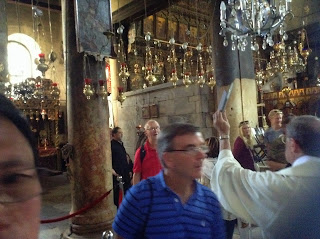 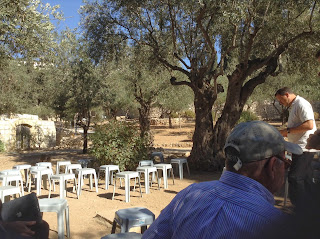 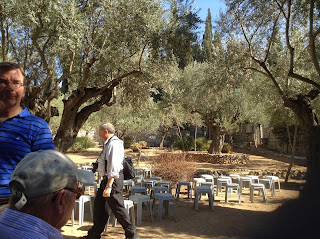 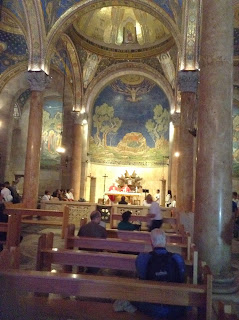 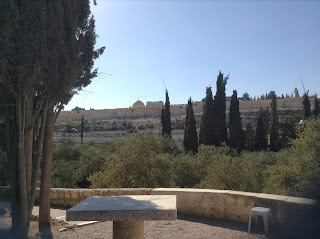 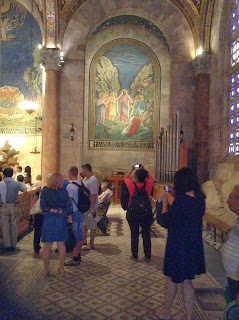 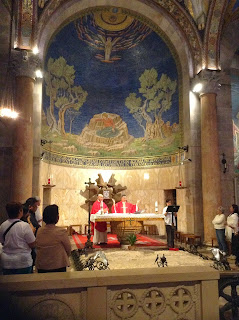 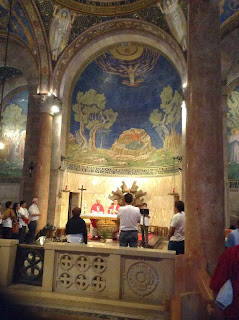 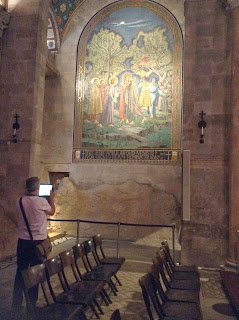 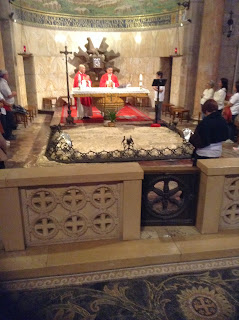 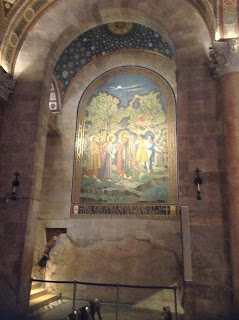 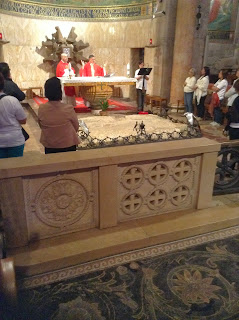 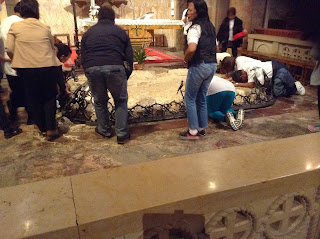 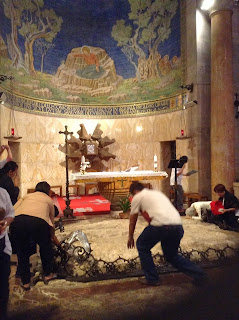 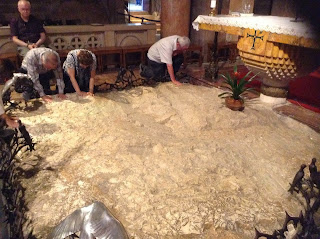 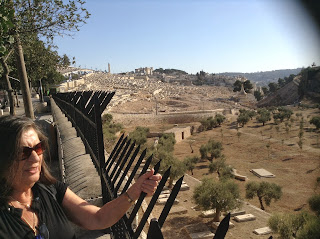 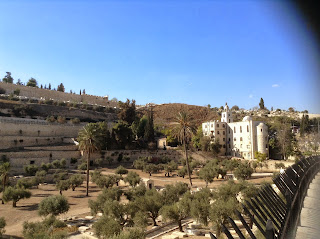 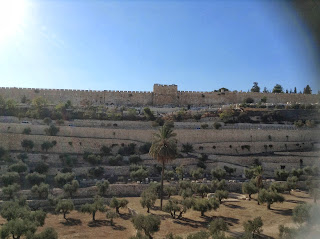