THE NOSTALGIA OF A PASSING GENERATION'S FINAL BREATHES OR THE TRADITION OF THE CHURCH, PAST, PRESENT AND TO COME? 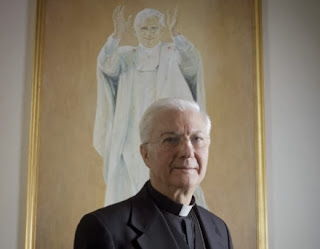 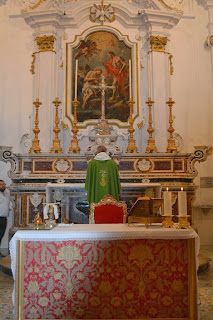 Archbishop Pierro Marini, former Master of Ceremonies for Pope John Paul II and the early pontificate of Benedict XVI is nostalgic for the "spirit of the Second Vatican Council!" He says that the Council was just the beginning but that it was not a template to be frozen in time but a catalyst  to future reforms of the Liturgy and ultimately of the Church and by way of jumping to conclusions, of dogma and doctrine.

His nostalgia is what precisely causes so many to feel as though they will upchuck their recently eaten breakfast. Dear God, what in the world is he nostalgic for in terms of future reforms of the Mass in the sphere of the "spirit of Vatican II?"
I know precisely what that means from my experience of the "spirit of Vatican II" in the seminary between 1976 and 1980 as well as the early years of my priesthood. The nostalgia of going back to that is like the nostalgia some have for rotary phones, party line and houses without microwave ovens!
The reform and interpretation of the Second Vatican Council which Pope Benedict promoted speaks of continuity in reform but does not throw out reform with the bathwater.
I think what we have seen with the approval of the new Anglican Ordinariate's revised Mass of the Roman Missal speaks well of this reform in continuity and may well speak of future reforms or options for the normative Latin Rite. This is from Pope Francis who must have given approval of it by the nod of the head since it was approved under his pontificate.
I'm speaking of the Anglican Ordinariate having an English Mass using old English and parts of the Anglican tradition for the Mass, but more importantly I am speaking of the Tridentine aspects allowed in the appendix of their missal that allows for the options of the Prayers at the Foot of the Altar, the traditional Offertory Prayers and the Last Gospel and more specific rubrics similar to the Tridentine Mass for the Roman Canon and Masses celebrated ad orientem and kneeling for Holy Communion!
The Anglican Ordinariate's "spirit of Vatican II" I think is the wave of the future, but those nostalgic for the 1960's version of the spirit of Vatican II only want to go backwards and not walk forwards.
Pope Benedict brought us forward with a recovery of common sense, proper tradition and Tradition and a keen intellect about the true teachings of Vatican II which in no way did he ever repudiate.
Archbishop Marini's vision of the spirit of Vatican II leaves much to be desired and has the odor of a swamp with rancid water. We cannot go back into that seward
Posted by Fr. Allan J. McDonald at Thursday, October 17, 2013

Could Achbishop PIERO Marini's vision be the same one advocated by "Futurechurch?" I felt like I was being transported back to the 70's when I viewed their website. We cannot go back into that sewer!

The "futurechurch" of the 1970's is a lot like Obamacare. It has imploded upon itself and it cannot sustain itself. The (for lack of a better word) remnant of faithful traditionalists will be around at the end of the silliness to clean up the mess and restore order. But why, why, why must we suffer and watch our beloved Church collapse under the weight of policies that are proven failures?

Why is it considered healthy and good if a liberal priest yearns for the chaos of the 70's, yet a priest who yearns for the days of adherence to the Faith and dignified liturgy is considered immature and unstable?

Indeed, perhaps in possible agreement with Ab. Marini we can all agree that the Vatican II goal--the reinvigoration of actual participation in the traditional Roman liturgy as Pope Pius X had urged--has yet to be accomplished. Indeed, with less than 0.1% of Catholics even attending it, the effort implement Vatican II has not even begun. Do even this many Catholics regularly attend a glorious Sunday Mass filled with chant of both priest and people?

The AB means the further secularization of religion and our sacraments. The Holy Father is responsible for loosening the woodwork. Curious to see what he might have in mind for the emerging company of pests.

For Piero the future looks bright, since his guy is now pope, the "spirit of Vatican II" incarnate. I expect an announcement anyday now that the cause for sainthood for Bugnini has been started by the Vatican.

I wish that people would keep the politics out of it too. It's possible to be politically liberal AND think that Abp Marini's ideas stink!

I wish people would keep politics out of it too. It's possible to be politically liberal AND think that Abp Marini's ideas stink!

I am new here,
There is an obvious continuity of the Church and its liturgy of the 1300's, 1400's, and the 1940's-50's. The classic Latin Roman Rite Mass didn't start at the Council of Trent--it was merely codified and imposed on the worldwide Latin Rite Church (with some notable exceptions).

There is an obvious and sudden rupture (rather than slow barely perceptible organic development over time) in the Church and its liturgy in the 1960's-70's. The official teachings may have remained essentially the same, just more developed, but there was obvious confusion, bad cathechesis, and widespread liturgical abuse and widespread abandonment of traditional piety and externals which underpinned orthodox belief.

So, yes, going back to the actual way things were in the 60's or 70's, BAD. Picking up with where we were during the Second Vatican Council, actually reading its documents (especially Sacrosanctum Concilium) and using it as the guide for the modest reforms that it called for in the then normative Tridentine (now Extraordinary Form) Mass--GOOD!

I can see why he says what he says. He really thought it would turn out differently than it did. I have to wonder if he thought it was going in the right direction before the Church began to crumble. What is the vision? What is the difference in Catholicism and any other religion in this vision?

So, New Anonymous, which do you prefer...going back to the unbelief, modernism, and apostasy of the 70's or going back to proper doctrine, liturgy, and belief? I assume you meant the Tea Party remark as a slur; I took it as a compliment. BTW, there were some pretty cool things about the 1300's and 1400's.

It is widely believed that liberal and conservative leanings are biologically and genetically determined. This is explored in a new book 'Predisposed: Liberals, Conservatives and the Biology of Political Difference' by Hibbing, Smith and Alford. it also applies, mutatis mutandis, to religious attitudes. Someone who is liturgically conservative is very likely to be politically conservative as well. It does much to explain the mutual incomprehension shown by both sides. The 'spirit of Vatican II', reflected in the pursuit of novelty and change, becomes to the liberal a matter of dogmatic certainty. He finds it easy to convince himself that it is God's plan for the Church, and that those who oppose it are not just wrong, but morally flawed. In the lexicon of the political left there is no worse epithet than 'counter-revolutionary'.

I can readily believe that my own conservatism is innate and hard-wired. This does not mean that I am axiomatically right and that those who disagree with me are axiomatically wrong. I occasionally agree with Pater Ignotus, but realize that we think in different ways; my predisposition is not the same as his. Argument is therefore merely an intellectual exercise, since there is no likelihood of my convincing him, or vice-versa.

John, Is that not a bit deterministic?

John, my only objection to what you say is not that I disagree with possibility of this hard-wiring, but that we are using the 'nature versus nurture' argument to relax our obligation to solve the objective and mutual problems we face. I think it is possible that Vatican II was intended to give Liberals more 'access' to liturgy. It seems it was totally hijacked, of course.

Gene, I suppose it is. I tended to put my conservatism down to my upbringing. However, children are often rebellious against their parents' values. From a very early age I was fascinated by history and my first experience of the Mass at age three or four (it was the typical 1950s parish Missa Cantata) enthralled me.

Anyway, I'm just off to join a weekend retreat for young Catholic adults. They are having Mass, Vespers and Compline in the Old Rite and need help with the Chant. They are "Futurechurch", not the superannuated liberals like Piero Marini.

A very interesting article relevent to this post. Check it out:
http://chiesa.espresso.repubblica.it/articolo/1350623?eng=y