What a glorious day. Today we walked to St. Peter's via the Vatican Motel Six where Pope Francis lives. These will be the first two photos below. His room is where the papal flag  is and his bedroom is to the left of it and shuttered. He only has two rooms, like I do at my rectory, but I bet his quarters are nicer!

The ordination was splendid, simply splendid! Now I know some of you will complain that I took photos during a Mass I was concelebrating. Dumb luck had me sitting right next to the altar! It is the altar directly behind the papal altar and is called the "Altar of the Chair" which you will see below! But a bishop seated directly in front of me took out is iPhone too and starting snapping pictures! What's good for the goose is good for the gander!

His Eminence James Cardinal Harvey, Archpriest of the Papal Basilica of Saint Paul's outside the Walls was the celebrant.  Two other cardinals were present in choir dress, Their Eminences, Cardinals Law and O'Brien!

I re-introduced myself to Cardinal O'Brien whom I've met many times before. In the early 1970's when he was an army chaplain, he was stationed at Fort Gordon, Ga which is a part of Augusta, Georgia where I grew up and all I had to say was Augusta, Georgia to him and he knew who I was.

Cardinal Harvey gave a very good homily and even referenced the Extraordinary Form of the Mass in  terms of the "Prayers at the Foot of the Altar" and what the priest says, "I will go to the altar of God, the God of my youth!"

As you know, my clairvoyance tells me that in the near future, our Roman Missal will have in the appendix the option of "The Prayers at the Foot of the Altar" as well as the options of EF's "Offertory Prayers" and "The Last Gospel." It will also have rubrics similar to the EF for the Roman Canon and more details for ad orientem celebrations of the Mass.

But I digress. As you know the Pontifical North American College has more men studying for the priesthood then they have every had. 41 men were ordained out of the 4th year class.

The liturgy was splendid, the choir was great and congregational singing stunning. The official antiphons for the deacon ordination Mass were all chanted, including the Introit following the very, very long procession of those to be ordained, other deacons, priests, bishops and cardinals.

The Mass was Mass VIII--Missa de angelis, but apart from that it was all in English. I think this is what should be mandated, the parts of the Mass in Latin and the vernacular for all else. 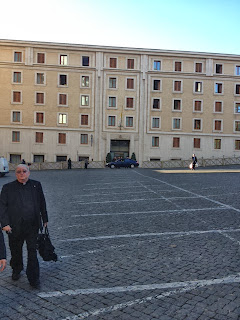 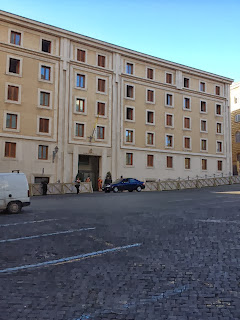 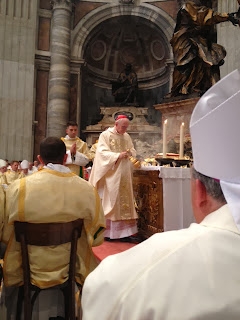 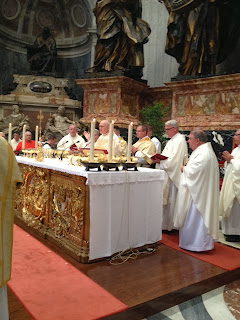 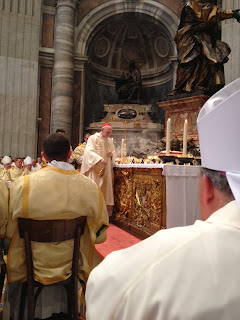 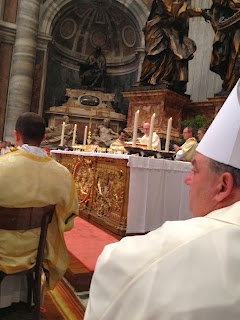 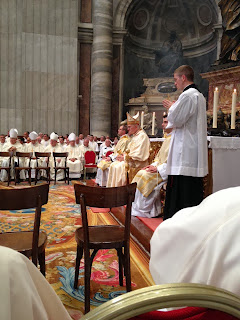 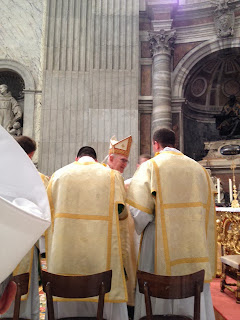 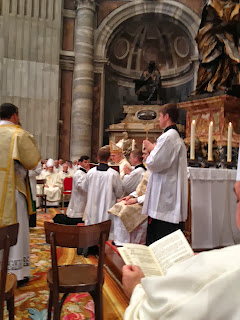 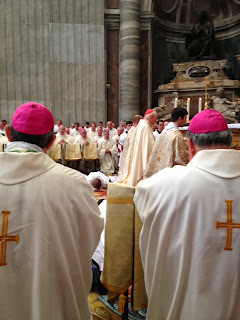 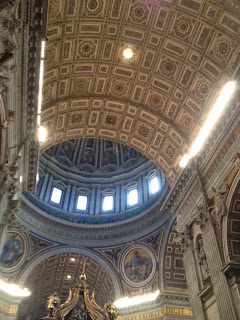 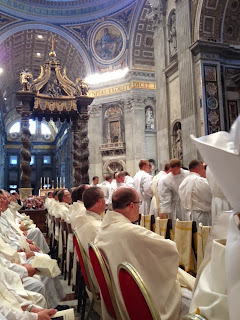 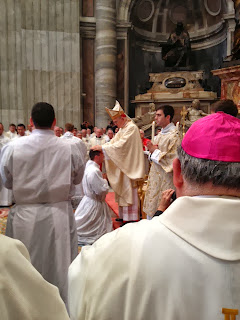 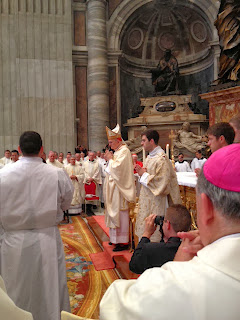 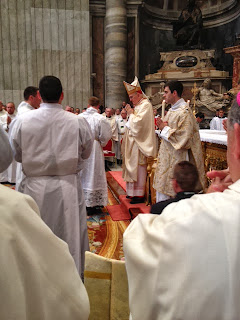 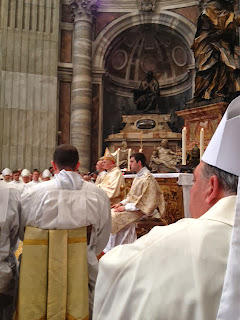 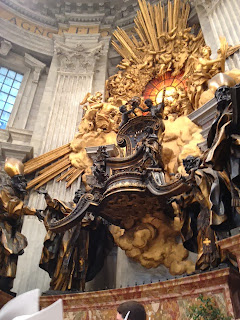 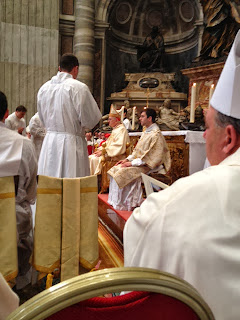 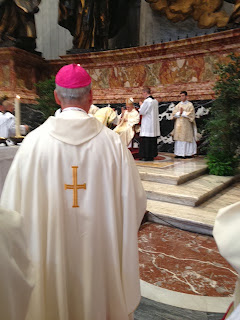 Father, any word on whether the pope, with all the bishops, will consecrate Russia to the Immacualte heart of Mary this coming Oct 13?

I am scheduled to distribute Holy Copminion at the Consecration Mass, bit I believe it is the world in general not just Russia.

Father, are you suggesting that the vernacular be mandated for any part of the Mass? This has never been the case; every priest has the option of celebrating the NO in Latin.

As for Mass VIII (de Angelis) the Kyrie and Gloria are not Gregorian, nor is Credo III - the fact that they were standard parish fare in the 1950s does not mean they need to be resurrected and trotted out on each and every occasion.

We're all counting on you to get the ball rolling in earnest on the Reform of the Reform. All our eggs are in your basket! Since you have a fine PV to cover for you at the parish, just stay in Rome until you get the job done. Your miraculous leg healing is the sign confirming your mission!

And, thanks for the pictures. I'm just a country priest who ain't never been nowhere except'n the USofA and Viejo Mexico. I feel I'm traveling vicariously through you, minus the knee problem.

Since HF Francis loves to depart from prepared comments and "ad lib" so much, I pray he specifically mentions Russia in the consecration. Father, do you know if all the bishops of the world are being told to participate (like the recent day of prayer for peace)? Do you relise you will be a part of history by distributing communion?

I am not clarvoyant like you, but if he mentions Russia, I predict within a year, no matter what it seems like now or how "indifferent" HF Francis seems to be in regards to liturgy, the novus ordo of Bugnini will be suppressed and replaced with a vernacular dialogue version of the 1962 missal for the OF. Then world peace will be at hand, as Our Lady promised.

No, John, just suggesting a minimum mandate of Latin with the parts but the rest optional in Latin.

They gonna' have Dixie cups?