THOSE WHO TWIST THE POPE'S WORDS AND THEOLOGY ARE CAPTURED IN THIS GREAT EDITORIAL ! 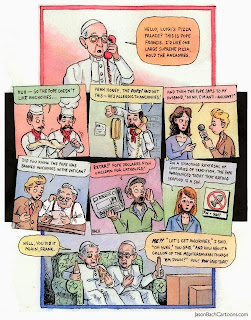 All the more reason for the Pope to speak precisely, unambiguously, and in straight-forward theological language. Also, we are leaving out his behavioral cues and language, which send a message, as well.

Commercial news, like commercial sports, must be taken and enjoyed for what it is: entertainment for profit. Anyone who really wants to know what's going on should read serious journals, not depend upon the commercial news media.

This morning I was at the Birmingham Oratory for their principal Mass, which is Solemn EF. It was the Mass for the Feast of Our Lady of the Rosary, and if any were in doubt as to what this means, they were reminded of the victory at Lepanto and the present danger posed by Islam.

The Mass setting (sung splendidly) was the Missae Papae Marcelli, apart from the Credo which was Credo IV. The Roman vestments with their floral design were exquisite. I was brought up in the years before the Council, and though I learned to serve the Mass and occasionally participated in a Sung Mass, I have only recently had the experience of Solemn Mass in the Roman Rite as a normative experience.

The clock will not be turned back, and Pope Francis's liturgical preferences are really neither here nor there.